My article from this month's Coastal Angler Magazine: 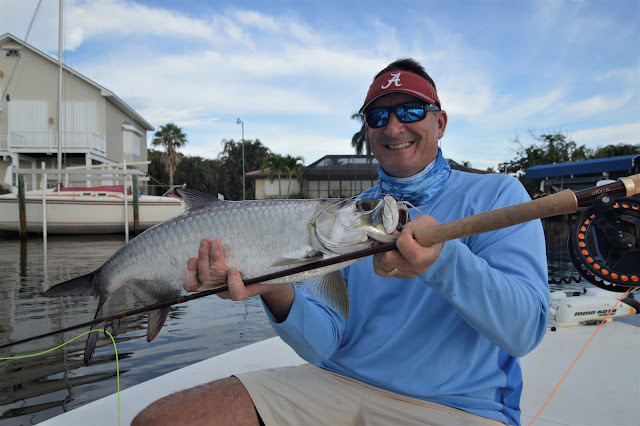 Thanks to the inescapable heat and oppressive humidity, late summer was nobody’s favorite time of year in Southwest Florida.  But if you’re like me, and love chasing juvenile tarpon with a fly rod, those intensely hot days may have given you some of the best action of the year and September can be even better.

For a lot of dedicated anglers, there is nothing better than jumping the 10 to 20 pounders that are still on the flats from right now until the first cold fronts of November.  The slick calm mornings and high water temps force our smaller resident tarpon to gulp air from the surface several times an hour.  This behavior is called rolling, and it’s something these fish must do in order to survive.

The prehistoric tarpon has a highly evolved internal air bladder lined with red blood cells that also functions as a rudimentary lung.  This allows tarpon to live in both fresh and saltwater and spotting a school of rolling fish during a dead-calm sunrise might be the greatest sight in all of flats fishing.

For those of you non-snowbirds, September could be your best shot at a tarpon on fly.  These smaller fish are totally unpressured, especially during the weekdays.  Juvenile tarpon are usually an early morning or end of the day target and almost any basin at least 3’ or deeper can hold them.  Calm conditions are essential for targeting them at the surface but once the wind kicks up these small tarpon roll far less frequently.  On a perfectly flat morning you’ll also hear them taking that breath of air from a good distance.  It’s a quiet but unmistakable slurping sound that can lead you right towards a pod of hungry fish.

The biggest drawback to chasing juvenile tarpon during the end of summer and beginning of fall is the water itself.  Thanks to the heat and frequent rains, most of SW Florida’s inshore flats look like a freshly brewed cup of coffee right now.  When the rolling fish drop back below the surface, our tannic stained water makes it tough to determine exactly where they’re going.  The best way to get a strike is to actually hit them with the fly while their heads are above the water.  If you’ve ever played the old arcade game Whack-A-Mole, you’ll understand this kind of fishing.  You need to anticipate where the tarpon will be before they actually surface.  Throwing bushy white flies, like Seaducers or deer hair Sliders, usually works best during these conditions.

Finally, and most importantly, remember that pulling a tarpon out of the water is illegal if they’re over 40 inches in length.  Even with the smaller ones it really shouldn’t be done.  Keep them in the water like you see in the photo on this page and you’ll be doing these fish a big favor.  Our juvenile tarpon can live a very long life, maybe 50 years or more, so fight them hard and release them quickly.  You might just meet them again in a few decades when they’ve put on a couple hundred pounds.