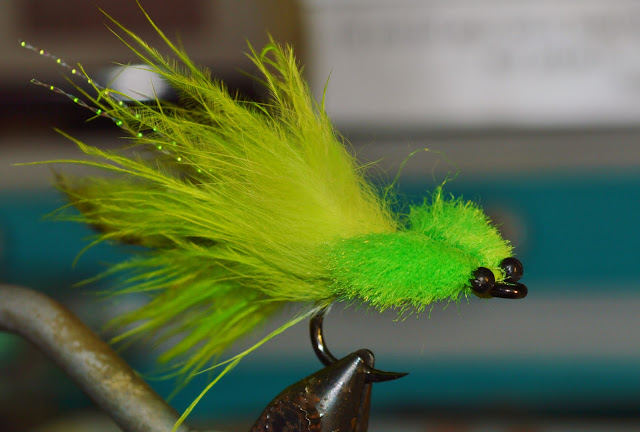 I'm always skeptical when I hear about some amazing new or "secret" fly that suddenly becomes all the rage in saltwater fishing. These are usually nothing more than slight tweaks to proven patterns aimed mostly at the fly catalogs than the fish.  The permit fishing fraternity usually has some of the worst offenders here. These guys regularly do little more than reinvent Del Brown’s classic Merkin Crab fly but still manage to get magazine articles written about their "new" creations. There are always a few exceptions to this, the Avalon Crab from Cuba is one example that is different and actually works, but I haven’t seen all that many real innovations for inshore anglers over the past decade.


I felt the same way about the Tarpon Toad when I first came across it several years ago down in the Keys. The former Olympic skier and expert angler Andy Mill was absolutely dominating every tournament he fished and was using Capt. Tim Hoover's version of the Toad almost exclusively. The pattern itself is yet another evolution of the Merkin fly but fine-tuned specifically to work on the Florida Keys tarpon. Andy was also doing some other unique things such as tying his Toads on relatively small 1/0 hooks, dropping his shock leaders down to 60# test, and casting a stealthier 10-weight rod to fool the heavily pressured fish that cruised the Islamorada flats. It was a pretty unbeatable combination for several years and these guys rewrote the record books during the most competitive fly fishing tournaments in the world.


At that time I was (and for the most part still am) seriously dedicated to the classic Tarpon Bunny fly, a relic from the 1970s which I usually tie in red and black on a 2/0 Owner hook. I've caught the vast majority of my tarpon on this pattern and usually pull it out of my box first thing every morning. It’s worked very well for me in the Keys, much of the Caribbean, and definitely here around Pine Island. But the Tarpon Bunny doesn't stay on my leader as long as it used to. These days if I get one refusal from a well placed cast, I immediately switch to a Toad of the same color. If that fly gets ignored I'll go to another Toad of a brighter shade, usually chartreuse, especially in lighter water like we have right now off the Gulf beaches.


The Tarpon Toad has a really unique action underwater, meaning it has almost no action. Unlike traditional flies like Cockroaches, the Toad basically hovers on an even plane when stripped instead of bouncing. This is actually a natural movement for prey as anyone who's watched shrimp swim around in a bait tank will know. This is most likely the secret to the Tarpon Toad's success. Imitating the prey's physical movement is far more important than imitating the prey's actual look when it comes to saltwater fly fishing.


If you're an experienced tarpon fisherman your fly box is probably half full of Toads already. If you're new to the sport, stocking up on this pattern is a great place to start. They’re easy to tie and widely available in fly shops and online. The Tarpon Toad is one of those trendy flies that wound up here to stay and may help you rewrite your own record book.
Posted by Capt. Gregg at 7:05 PM