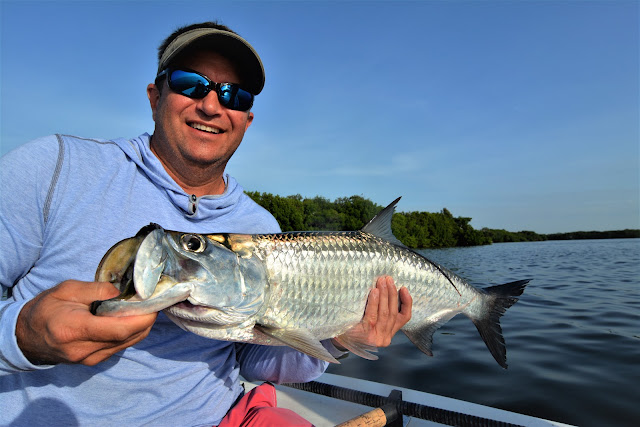 Mike from Alabama brought this nice little 12 pounder in yesterday with a live pilchard.  Even though he grew up on the east coast of Florida, this was his first tarpon landed.  We're hooking a lot of these guys right now and getting about half of them to the boat.  Batting .500 when you're tarpon fishing is actually a pretty good average and we've been right there all season.
Posted by Capt. Gregg at 5:53 PM

Rainy Season Is Here, And So Are The Baby Tarpon 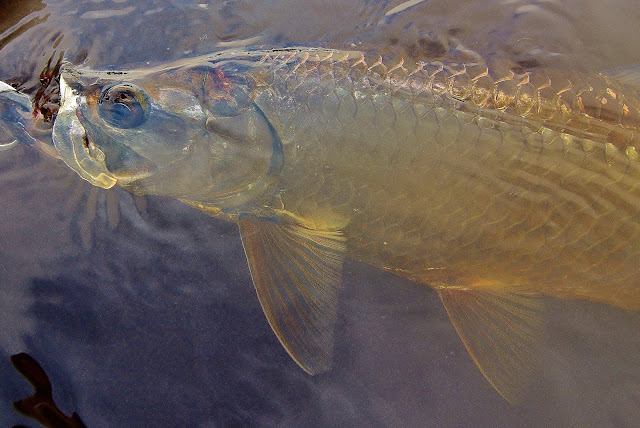 Actually, the baby tarpon have been here for several weeks and won't be going anywhere for a while.  I've been a bit quiet on this blog since the weather so far this May has mostly sucked.  Sorry to be so blunt but I feel like I'm back in the Keys with winds over 15kts, and well over 30 the last two days, being the norm. That's a real problem up here in SW Florida since our water is nowhere near as bright and spotting the migratory tarpon from more than 50 feet out is a real problem.  That's why we've been chasing the smaller fish most of the month and thank God for them.  The 5 to 20 pounders have been hanging around several shorelines and the one in this photo hit a white #4 Schminnow meant for a snook popping glass minnows.  If it weren't for the occasional dumb tarpon, this season would be very frustrating for my fly anglers so far.
Posted by Capt. Gregg at 7:59 PM 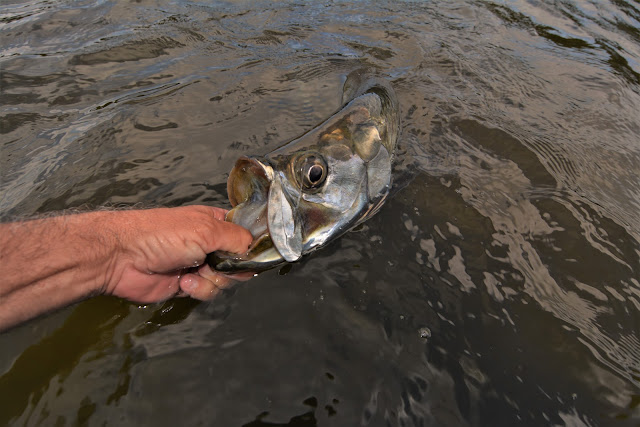 Blowing like hell out there all day but at least it was from the southeast.  That means the wind and sun is to our back and makes sight fishing a lot easier.  The few tarpon I've landed recently have been juvenile fish, like the ten pounder in the photo above.  My angler popped this one from the shoreline on a pinfish pattern and it involved a lot of blind casting to make that happen.  The small tarpon are here in full force and that's great news.  They usually don't show up until mid-summer so thing are looking great for the entire season so far.
Posted by Capt. Gregg at 7:10 PM 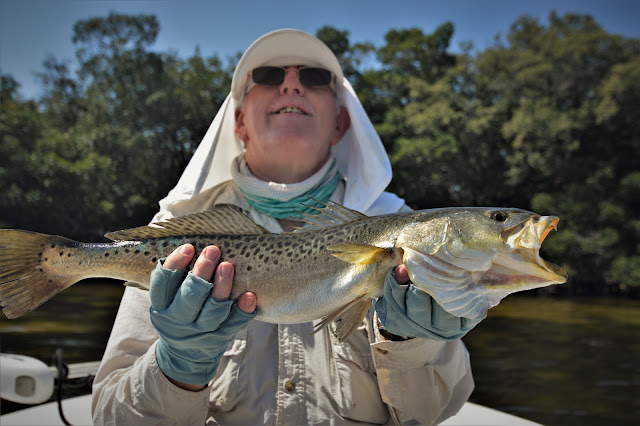 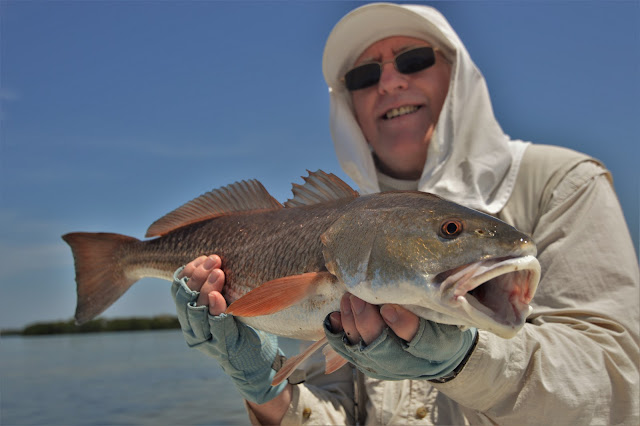 My good friend and long time angler Geoff Seed from England with the results of his last trip with me yesterday.  We tried for tarpon all morning and when it became obvious that they weren't going to play we chased edible fish instead.  The 25" trout and 26" red both ate  live shrimp and were more than worth the effort.
Posted by Capt. Gregg at 7:28 PM

Tarpon On The Fly Off Pine Island

My article from this month's Nautical Mile Magazine: 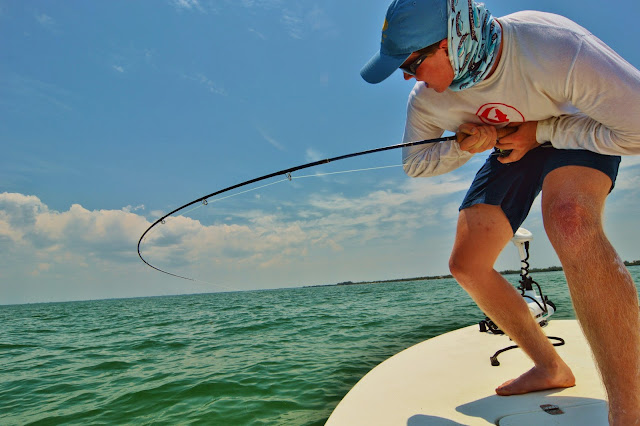 May in Southwest Florida is one of my favorite months since it’s the real start of our tarpon season.  The big migratory schools, which usually show up in early April, are still here but their numbers are really picking up as they move north from the Keys.  The little resident fish, and by “little” I mean any tarpon under 30 pounds, will start sliding out of their hiding spots and become a regular sight on the inshore flats and residential canals all along the coast.


If you’re a fly angler, these are the ultimate saltwater gamefish no matter what their size.  You can target them with an easy casting 8-weight for the juveniles and up to a beefy 12-weight for the full grown ones.  Tarpon will eat a variety of relatively simple patterns, and with the right leader you can have them whipped in a lot less time than most folks realize.  So let’s talk about that leader system for both juvenile and adult fish.


When I first started guiding two decades ago, back in the Monofilament Era, tarpon leaders were remarkably complex creations of several 12 to 80lb test line segments held together by a mix of Bimini Twists, Homer Rhode loops, and Huffnagal knots.  I would start tying these in December and each leader usually took a quarter of Monday Night Football to construct before they were attached to their designated fly and snapped into something called a stretcher box.  Once there, they would wait in straightened silence for springtime.


Fluorocarbon, which is effortless to keep straight compared to mono, changed all of that.  Tarpon leaders can now be tied while motoring away from the ramp on the boat and I definitely don’t miss those mind-numbing leader building sessions at all.


For small tarpon I use Seaguar Red Label fluorocarbon to create a 10’ leader I call a “4-3-2-1.”  That simply means 4’ of 40lb, 3’ of 30lb, 2’ of 20lb which is the class tippet, and just over 1’ of 40lb for a shock tippet.  If you think you’ll encounter larger fish then bump that last part up to 60lb, which will withstand a big tarpon’s rough jaw even better.  All these lengths are joined together by double surgeon’s knots which are effortless and hold at nearly 100% of the line’s strength.  The fly is attached to the shock tippet with a perfection loop, which I also use for all my spinning lures, and that’s it.


If you tie your knots properly, and test them afterwards, they won’t let you down.  These leaders are more than strong enough to beat a 3’ tarpon into submission in less than 5 minutes on an 8-weight.  Hook up with a 100 pounder on a 12-weight and you should have it boatside in no more than half an hour.  Homemade leaders are simple, effective, and very inexpensive compared to prepackaged ones which can cost up to $10 each.  Give it a try and be thankful that you don’t have to fill up a stretcher box anymore.
Posted by Capt. Gregg at 7:14 PM 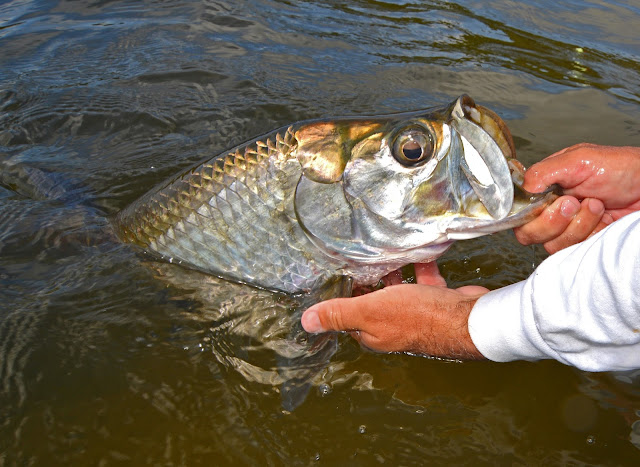 If I had to give Tarpon Season 2017 a letter grade here on the first day of May, it would get a "C" average.  There are two things that factor into this:  weather conditions and the number of fish we're seeing here in SW Florida.

Let's start with the weather conditions first.  They suck.  We've had almost two solid weeks of 15 knot winds, which is common for Key West right now but not Pine Island.  My fly anglers are struggling just to make a backcast, but at the same time the live bait guys are doing a lot better.  Seeing fish is almost impossible on most early mornings thanks to the churned up water.  The weather so far this spring gets a "D-minus" for being a serious chore to overcome.

On the other hand, the tarpon we're seeing this year get a solid "B-plus" for the numbers and their size.  The big migrating fish were here at the end of February and really never left us.  The winds made them tougher to find for most of March but the resident juveniles came out of the woods recently and have been a blast ever since.  No complaints there.

The tarpon won't be leaving us for several month but the winds should vanish very soon.  Overall, I think this is going to be one of the better seasons to chase these fish than we've had in a long time.  Fingers crossed.