Here's my article for the April issue of Coastal Angler Magazine.  Kind of appropriate for the mixed bag of weather we've had so for this month in SW Florida. 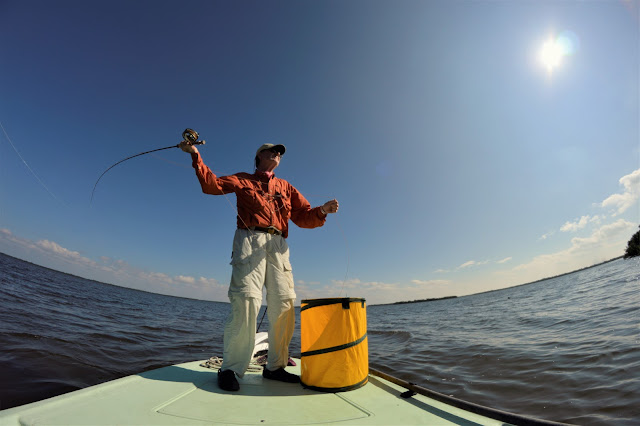 Even though I mostly write about saltwater fly fishing tips and tackle here in on the pages of Coastal Angler, I’m far from a purist.  I absolutely love throwing flies but my skiff never leaves the dock without a pair of spinning rods on board.  There are many times when fly rods work better than anything and a few more times when they’re obviously a lost cause.  Let me give you a few examples of both.

Here in SW Florida, we’re blessed with plenty of flat calm mornings during the late spring, nearly all of the summer, and much of the early fall.  When you’ve got a single redfish tailing or tarpon rolling in absolute glassy conditions, throwing a spinning lure at them can be about as effective at tossing a rock on their heads.  A rabbit fur shrimp fly tied on a #4 to 2/0 hook lands far more quietly than anything tossed by conventional gear.  This is crucial for saltwater fish that, unlike freshwater trout, don’t expect their food to fall from the sky.

Fly rods are also great when you’re drifting a shoreline for snook.  They allow you to cast right at or even under the mangroves, strip the fly back a few feet, and recast into the strike zone over and over with little effort.  And snook really love to hit 1/0 white Deceiver patterns.  Working a shoreline from 50 feet out with spinning gear requires a lot more time between casts than a quickly hauled fly.  If your leader is heavy enough, and I never go lighter than 15-pound test, you’ll be amazed at the size of fish you can yank out of the shoreline with an 8-weight rod.

Windy days are obviously the enemy of all fly anglers.  If it’s cranking over 20 knots and you’re on your first flats charter, don’t be too proud to pick up the spinning rod with a live pilchard or hunk of cut ladyfish if the guide recommends it.  It will often mean the difference between actually catching something other than the back or your head.  Without the ability to punch a back cast into a stiff wind, you’re in for a very frustrating day.

And speaking of that, the double haul technique is also something that every fly angler should know before heading to the flats.  It’s the only thing that will allow you to be effective in any kind of wind.  Even on the flat calm days, the double haul will cut the amount of time your fly line is in the air by half and greatly increase your distance, too.  If you have this mastered you’ll be able to shoot 50 feet of fly line to the target in less than 5 seconds, and be able to catch almost anything that swims as a result.  If you still need to learn the double haul and don’t have the time or money for actual lessons, YouTube is your friend.  There are plenty of excellent videos out there that can show you this technique step by step and in slow motion.

The one thing I always tell everyone to remember is that fly fishing is just a sport, not a religion.  I look at my fly gear as just another tool in my tool box.  There are times when an 8-weight is the perfect tool for the job and other times when it’s almost useless.  Fly rods, just like spinners or bait casters, are something every serious flat angler should know how to use and use well.  Best of luck out there.