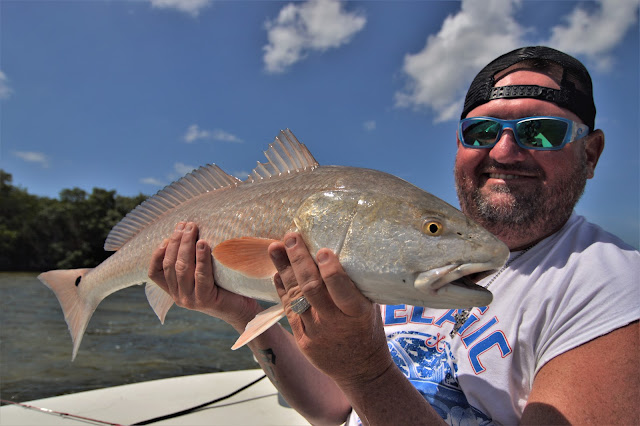 I just had another week where none of my anglers landed any legal redfish.  They were all over the 27" top of the slot.  (Except for a single 16 incher that I thought was a trout until we pulled it out of the water.)  Bob from Cape Coral landed the 32" beauty in the photo above on a hunk of cut ladyfish tossed at a school of at least 20 others just off Matlacha.  He's mostly and offshore guy and had never caught a red and really wanted to try one for dinner.  I knew way before we landed this fish that it was over-slot and Bob was just a bit disappointed about that, but this is what we call a "High quality problem," on the water.  For a first red, this one was a real gem.

On a side note, take a look at the color of this fish.  You'll notice that it's not really all that red, just slightly orange with a lot of white on the belly.  That's because our water all around Matlacha and most of Pine Island is still so remarkably clear.  We haven't had any rain in SW Florida for several months and almost no runoff is coming down the Caloosahatchee River.  The water temps are also several degrees below normal so the natural tannic acids from both the mangroves and grass beds haven't leeched out and stained the waters yet.  The flat where we caught this fish looked as clear as any in the Keys or Bahamas.  Redfish, like many other shallow species, can adjust their skin pigments to match the color of both the water and the bottom where they hunt.  If you take a look at my previous post you'll see a photo of one caught way up in the mangrove creeks a few days earlier with a much different color.  By mid-July, when our water is as dark as strongly brewed tea, all these local redfish will be the same shade as the bricks on Main Street in Ft. Myers.
Posted by Capt. Gregg at 6:36 PM