A Key West Flashback: Barracuda On The Flats 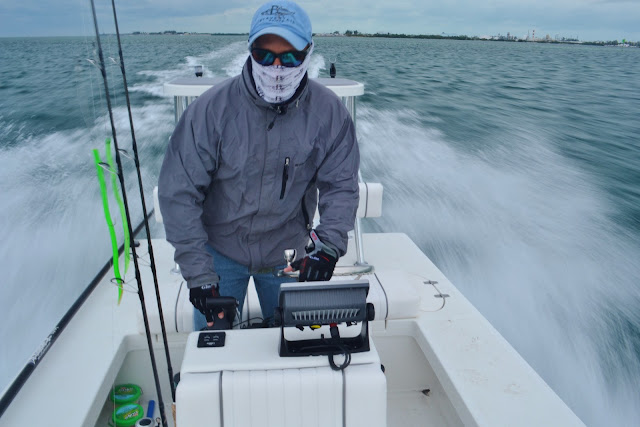 This picture was taken in early March, 2014, after I dropped off my buddy Capt. Mike Bartlett's new Beavertail Vengeance to him on Key West.  I agreed to make the 390 mile drive from their factory in Bradenton since I knew that I'd get at least two days on the bow of Mike's new skiff in exchange for my drive.  I had grand plans of throwing flies at tailing permit and maybe even some early season tarpon.  Those plans were quickly demolished by the weather.

As you can see, Mike was bundled up like he was running a smallmouth trip on the Susquehanna River instead of a flats trip at the south end of Florida.  A cold front dropped on us the night I arrived and the temps were in the 50's the next morning.  That's frigid for Key West.  The skies were also overcast with high clouds and the winds was pushing 20 knots.  I knew I was never going to be warm at any point during the day, let along catch a permit, bonefish or tarpon with anything other than dynamite and a gill net.

But fortunately, for all the cold and frustrated anglers who hit the Keys at the wrong time of year, barracuda exist.  I'm not exaggerating when I say that they might be the greatest light tackle species you can chase with a spinning rod.  Barracuda love to eat when it gets cold and sloppy in the shallows.  In fact, they get remarkably aggressive.  Just tossing a foot-long tube lure and retrieving it at top speed across the flats is enough to draw an insane strike. 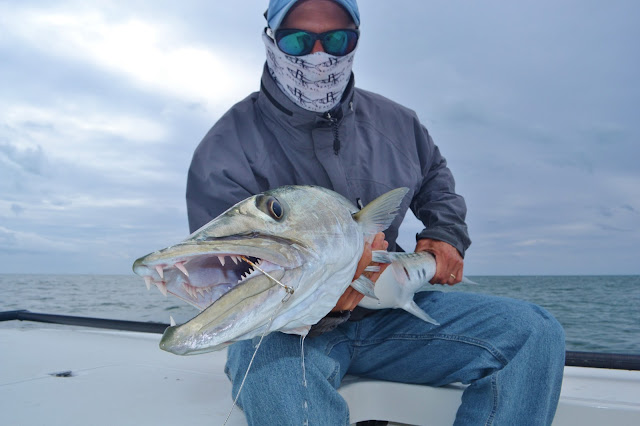 We caught the 3-foot fish in this photo that same morning just a hundred yards outside the Oceanside Marina.  The clouds never parted and the wind stayed steady, but the big barracuda were right where Mike new they'd be and didn't disappoint.

I loved chasing these scary predators when I used to guide in Key West and it was a blast to get reacquainted to them on a cruddy day.  Unfortunately, we don't have barracuda on the flats around Pine Island and I miss them terribly.

This past week in SW Florida was nothing but wind, some clouds, and a little too much cold.  I've had all fly anglers on the schedule and have been lucky to land some nice trout along with a few undersize snook and reds.  It'll get back to normal in a few days but a big barracuda or two, like we used to catch off Key West, would have made this month a lot more tolerable.
Posted by Capt. Gregg at 6:42 PM