Still Some Red Tide, But Plenty Of Redfish Around Pine Island 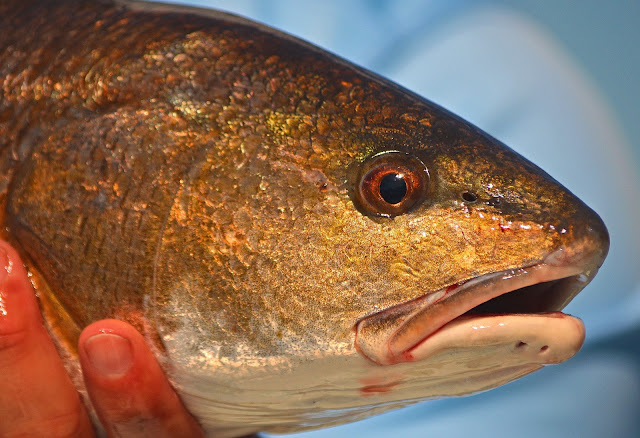 Yes, we're still getting over the lingering red tide that killed a lot of bait (and quite a few gamefish,) in Charlotte Harbor and along our Gulf beaches.  This has been going on for over two weeks now and is finally dissipating enough that I'm hearing of good catches off the north part of Pine Island.  I've spent the entire time south of the Matlacha Bridge where the algae bloom never reached and had no problem putting my anglers on fish each morning.  Getting them to eat was another story, of course.

This morning I had a very rare day on the bow of a skiff with a rod in my hand thanks to my buddy Tyler.  As expected, it was too windy to fly fish so the spinning gear came out instead.  That never bothers me, especially when the reds are extra spooky.  Whipping a fly line back and forth over their heads is never a good thing but a well placed live shrimp is hard to refuse.  That's what fooled the one in this photo, a perfect 24 incher that was in a small school hugging the mangroves near McArdle Island.  He'll be turned into ceviche tomorrow afternoon and there are still a few hundred more out there just like him.

Be careful with the low tides this week, the water is much skinnier than the charts are reporting thanks to the wind.  But if you've got the right boat, kayak, or paddleboard, reds like this should be easy to spot along the south Matlacha Pass shorelines.
Posted by Capt. Gregg at 7:37 PM