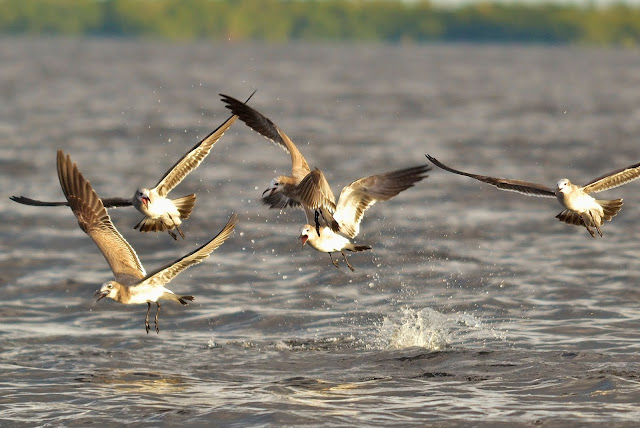 No matter where you fish in saltwater, diving birds are always an indicator that prey and usually predators are right under the surface.  On the inshore waters around Pine Island you'll basically see three different types of birds hitting the surface that deserve your attention.  Terns, gulls and pelicans are always an indication that bait is present and ready to get eaten.  The gulls in this photo were picking off glass minnows that a school of mid-size jacks were blasting in three feet of water.  The feeding frenzy would only last for about a minute before the jacks kept moving but the birds would bunch up quickly once the attack began a few hundred yards away.  We chased them for an hour that evening and go several hookups on both fly and spin.

Pelicans are the most common birds you'll see dive-bombing bait in both Matlacha Pass and Pine Island Sound.  If you're planning on throwing a cast net it's a no-brainer to run up and check out what their eating.  Unfortunately, if the pelicans aren't accompanied by some gulls and terns it's not a good sign that bigger fish are lurking below the bait.  I've watched dozens of brown pelicans dive on massive schools of threadfins in Matlacha Pass this summer without a single trout to be found among them.  If at least a pair of royal terns joined the party that meant the jacks or bluefish were already there.
Posted by Capt. Gregg at 6:47 PM