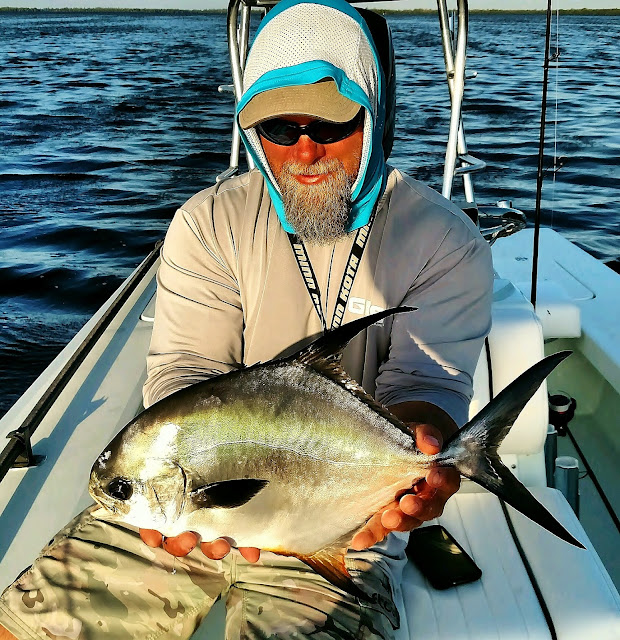 This is my buddy Capt. Eric Wrenn with one of eight (yes, eight) permit he caught in one day last week near the north end of Pine Island.  All of these fish were in shallow water and hit live shrimp.  While they're very common on our reefs and in deeper waters, catching permit on the flats anywhere in Florida other than the Keys is quite rare.

The shallows of Pine Island Sound and Matlacha Pass actually hold a lot more of these fish than most people realize.  Local biologists working for FWC have netted permit by the hundreds in the last year while doing inshore fish counts.  I've personally seen them following manatees in Charlotte Harbor and tailing after crabs in Buzzard Bay.  Another friend and local guide, Capt. Joe Harley, had anglers land three permit on fly last fall from the flats of Pine Island Sound.  In other words, I'm hoping that this is the result of an upswing in their population and will be the start of a continuing trend.

Catching eight permit in one day is a real accomplishment no matter where you're fishing.  On my best trip ever down in Key West, which is Ground Zero for this species, we landed five using live crabs.  So yes, Capt. Eric got a bit lucky last week and found a very hungry school, but he's also a great fisherman and routinely hauls in something impressive.  He's also one of the few Pine Island guides who really understands fly fishing, so if you'd like to book a trip give him a call at 336-601-7874.  Tell him I sent you but don't expect to land eight permit.
Posted by Capt. Gregg at 7:42 PM