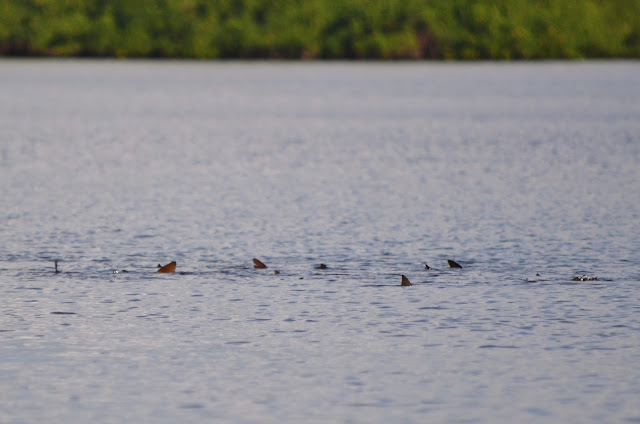 November means one thing to me as a fishing guide here on Pine Island: negative low tides. Seeing that little minus symbol on the tide charts when the lows happen just after sunrise and just before sunset is almost as good as finding presents under the tree on Christmas morning. These are some of the best conditions to chase tailing redfish and half of the days this month have a tide of 0.0 or lower. For die hard skinny water anglers this is as good as it gets.

My favorite times to hit these ultra-shallow flats are about an hour before the bottom of the tide and then the first two hours of the rising water. This is when I usually find the redfish feeding most aggressively because their prey, which is mostly crabs and shrimp, is easily pinned to the bottom. This is also when you’ll find reds sticking their tails straight up into the air and waving them like signal flags. It’s easily one of the coolest things you’ll ever see out on the flats.

One other thing to look for out there are cruising stingrays. The bigger rays attract fish like a magnet on certain flats in Pine Island sound and I’ve seen more than a dozen reds hanging on their backs waiting for a crab to flush from underneath. This is also a common behavior for other species of gamefish so it’s not a bad idea to toss a lure or fly at any passing ray. Some of the biggest trout and jacks I’ve ever seen have been landed this way. The rays are easy creatures to spot on the negative low tides, too. Just look for the large pushes of water or even their wingtips poking above the surface.

In a previous article I wrote about the best way to go after low tide reds with flies, which is basically to bonk them right on the head with light spoon patterns. That tactic obviously won’t work if you’re throwing heavier artificials with spinning gear. One lure I’ve had great success with that doesn’t spook them as easily are Gulp Jerk Shads rigged on weedless swim bait hooks. These can be dropped right in a school of feeding reds and usually get pounced on immediately. With 10 pound braid you can throw these light Gulps very accurately over a surprisingly long distance. And Gulps really are the one artificial that actually does work better than live bait (most of the time.)

The one last thing to know about working schools of fish on a falling tide is to obviously approach them with caution, and I don’t just mean that in order to avoid spooking them. The water during a negative low can disappear quickly and for a long time, especially on a windy day after a cold front. It’s very easy to get shoved up onto a flat or pole your way into an area while you’re chasing tailers and suddenly have no way back out, even in a very light skiff. This would be a really miserable experience if it happened at sunset and close to the mangroves where the bugs live. Keep in mind that the numbers you see on a tide chart are predictions and nothing more than that. While usually quite accurate, the depths and times of posted tides can vary significantly, especially when strong weather happens. Keep that in mind when you’re fishing around negative lows this month and you’ll keep yourself out of trouble.
Posted by Capt. Gregg at 7:09 PM

Fly Fishing In The Wind 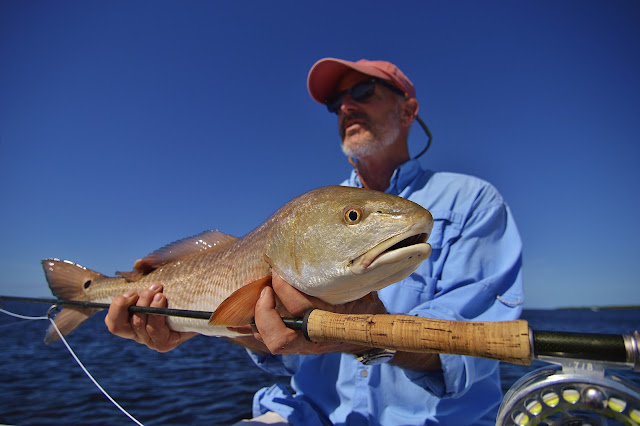 It's late October and the fall cold fronts have arrived on Pine Island.  The first one hit last Sunday and the wind hasn't stopped since.  Fortunately it's blown steadily out of the east and southeast which gives us a huge amount of leeward shoreline to work all along Matlacha Pass and Pine Island Sound.  The open water is a churned up mess but close to the east wall mangroves it's calm and very fishable.  The trick is to stay tucked within 20 feet of the trees and keep your casts low.  There are tons of redfish cruising the clean water along the roots looking for shrimp and whitebait.  The one pictured above ate a crab fly just inches from the trees and we've also landed a few others on Clouser Minnows this week.  Another cold front is bearing down on us as I write this so the wind isn't going away for at least a few days.  Don't let that bother you.  There's always a shoreline where you can hide and the waters are cool enough that the fish will feed all day.  If you don't feel like fighting it with a fly rod, drop some live shrimp under the bushes on the incoming tide and you'll catch the hell out of everything.
Posted by Capt. Gregg at 7:51 PM 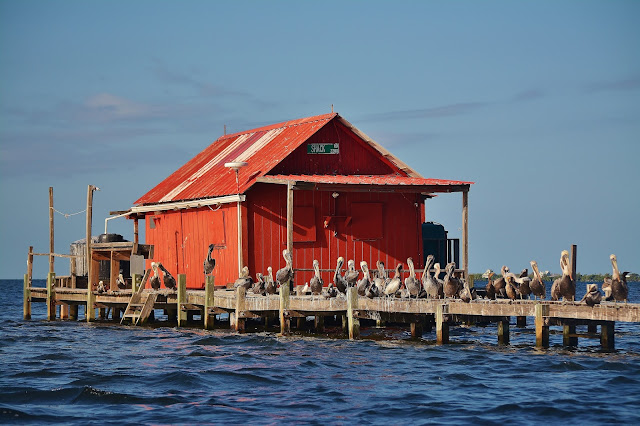 Matlacha Pass In The Wind 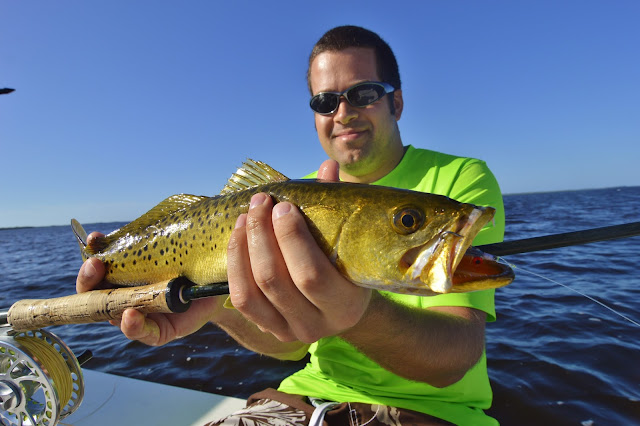 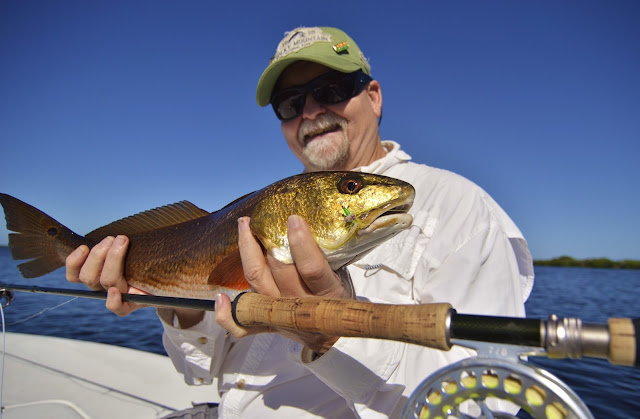 We've been battered by some really harsh winds all week but still managed to pull in a few decent fish on fly these last two days.  The eastern shoreline of Matlacha Pass has provided an nice leeward shoreline during the high water in the mornings.  My angler James Cash, in the bottom photo, even landed his first inshore Slam this morning on fly.  His redfish and trout were keepers and he nailed a couple of undersize snook, all on Clouser Minnows. Great results on a falling tide and tough weather.
Posted by Capt. Gregg at 7:40 PM

Company owners Will and Elizabeth Leslie handed out the trophies on Saturday night. 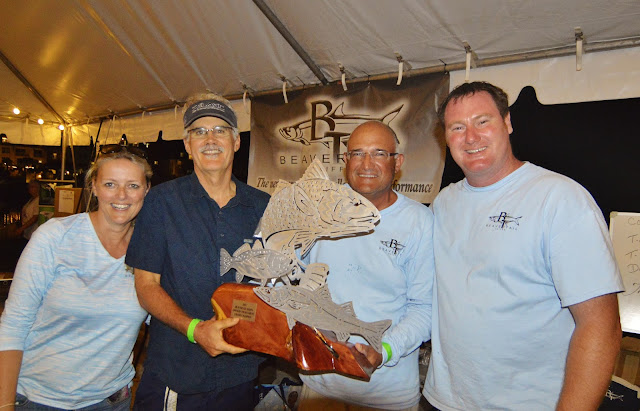 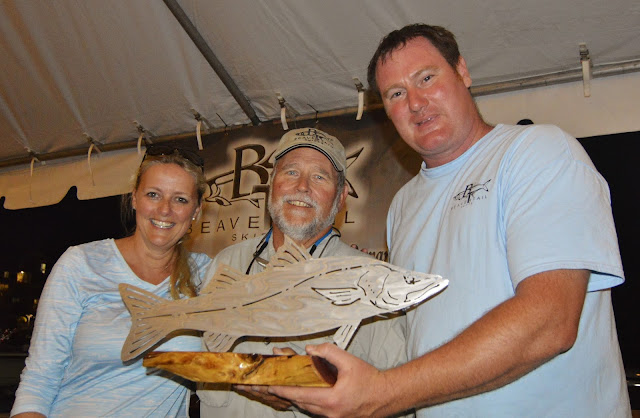 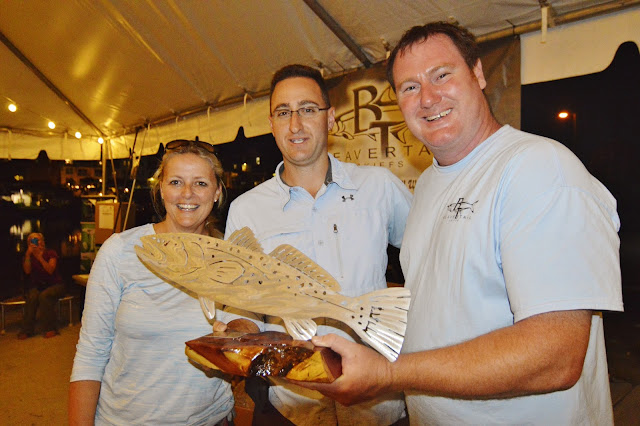 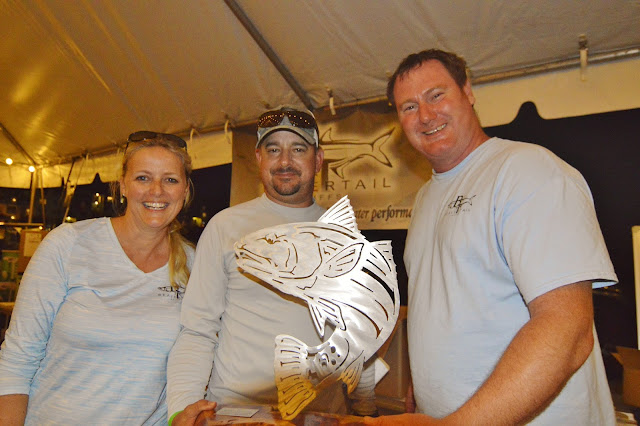 This was a great tournament with 30 boats signed up and almost 80 anglers and family members participating. We also raised  $7360 for the Wounded Warrior Anglers charity through our raffles and silent auction. On top of all that, the weather was perfect and the fishing wasn't bad either. We'll definitely be doing this again next year and it will be an even bigger event since there will be another 100 new Beavertail owners on the water by then.
Posted by Capt. Gregg at 7:03 PM 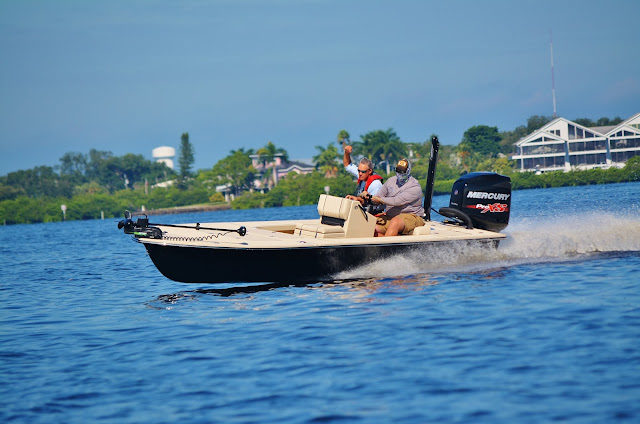 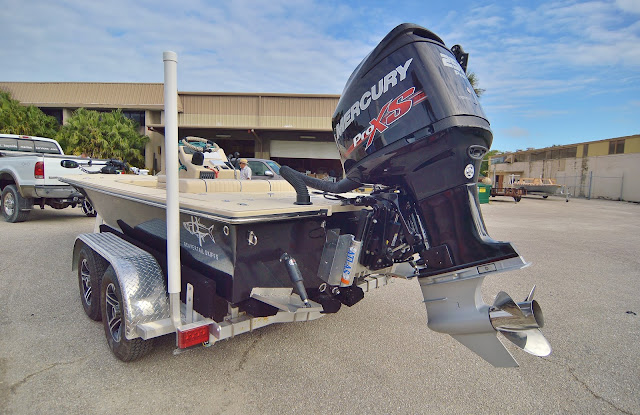 If you want to check out this awesome new BT Lightning in person stop by the Little Harbor Resort and Marina this weekend.  Click here for more details.
Posted by Capt. Gregg at 7:03 PM

Redfish From The Mangroves Off Matlacha

Great morning tides this week have made fishing the bushes really productive in Matlacha Pass.  The bite would usually kick in about two hours after the waters started flooding and dropping live shrimp under the bushes produced a bunch of different fish.  Undersize snook were our most common catch but I never consider that a problem.  They're a fun fight and it's great to see how healthy their population is these days.  Legal redfish are crawling under just about every shoreline but sometimes you have to be patient to find them.  Big shrimp are always my go-to bait this time of year but they also attract a lot of fish you won't want to catch.  That's not always a problem.  If you find a spot that's loaded with pinfish and small snapper, be patient if you have enough live bait.  The bigger reds will eventually be attracted to the feeding frenzy.
Posted by Capt. Gregg at 7:32 PM

This is an exceptionally well done video by FlatsHQ and shot right here on Pine Island: 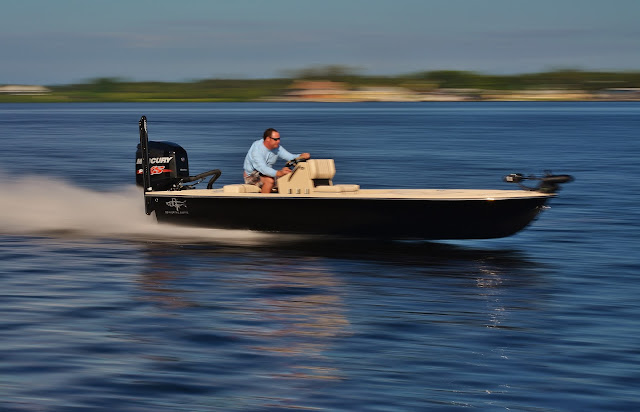 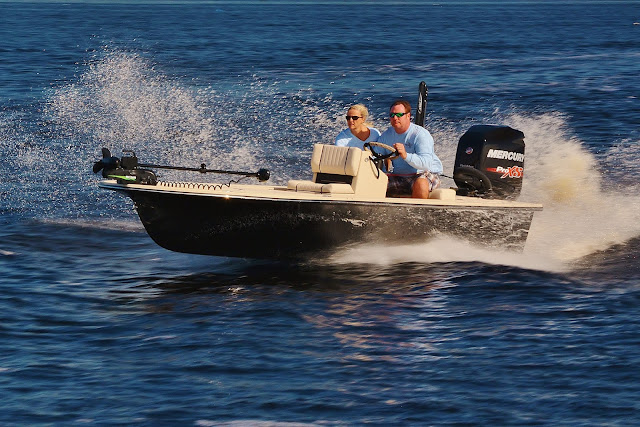 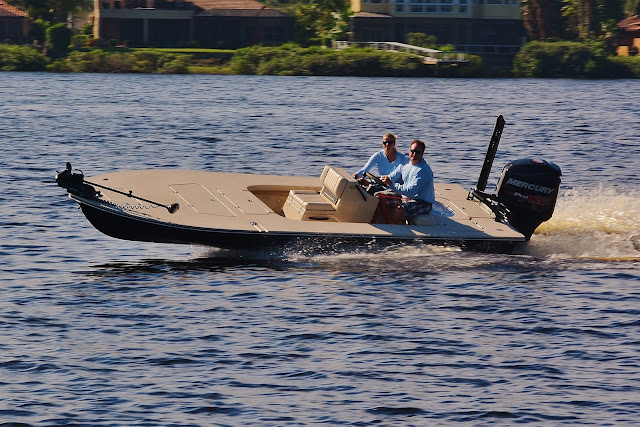 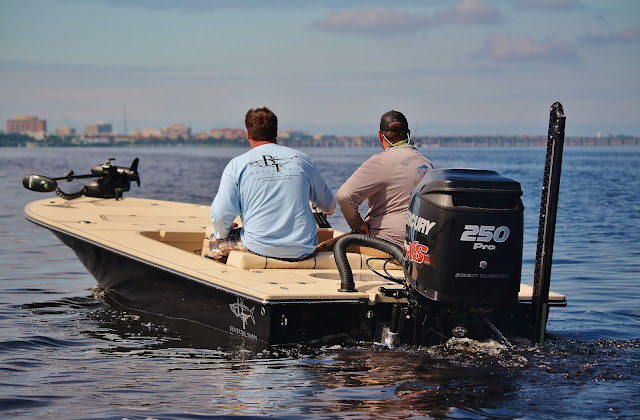 I drove up to Bradenton yesterday to photograph and run the latest BT Lightning to come out of the shop.  I call this one the Blackbird since it's easily the fastest Beavertail to hit the water.  The big Merc ProXS was in its break-in period and turning a standard prop but still managed to push the twenty footer to 74.9 mph.  In the right hands, this could be an 80mph rig.  The price on this boat, as pictured with all the accessories, is $64,000 and that includes a dual-axle Peterson trailer with great looking alloy wheels.  You can see this one in person at the BT Owner's Tournament next weekend at the Little Harbor marina in Ruskin, FL.
Posted by Capt. Gregg at 7:21 AM


Here's the latest project from my buddy Chris Helt and his Spooled Reels laboratory.  This 8 1/2 minute film is a big departure from the standard fly fishing videos that are all over the web these days.  It shows a mostly unattractive urban environment that's become home to a magnificent invasive species and makes me really want to go there and catch one myself.
Posted by Capt. Gregg at 7:07 PM 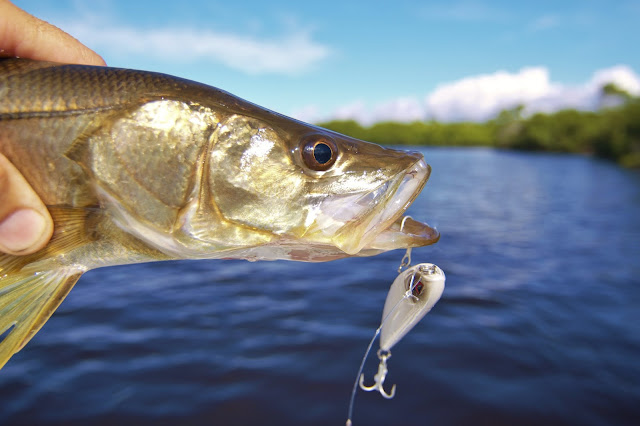 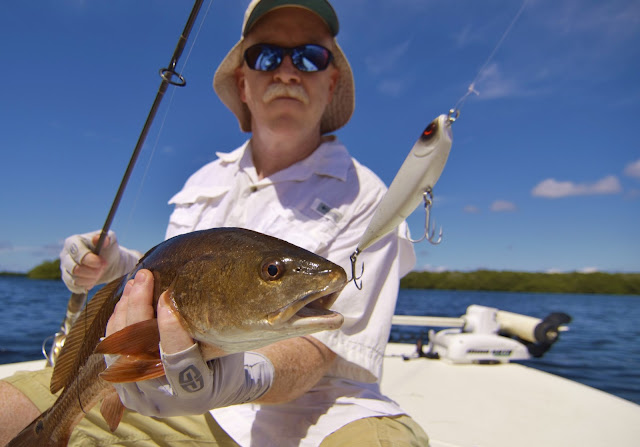 My favorite artificial to use with spinning gear has always been a topwater.  There's nothing more exciting than watching a big gamefish blow up underneath a lure worked across the surface.  My first choice has always been the proven Zara Spook but I've recently tried out the new Flats Walker made by FlatsHQ, a local SW Florida based company.

I've wasn't too surprised that the lure drew a lot of strikes since almost any well designed topwater will attract a hungry snook.  What did surprise me was how easy the Flats Walker was to work and how relatively weedless it ran.  These are two things this lure does better than older Zara Spook, which takes a bit of skill to swim properly and grabs every piece of grass it encounters.  The Flats Walker sits a little lower in the water and has a more subtle action but still pulled the snook and reds right out of the mangroves.  It also has some very substantial hooks that never bent in the least on any of the fish we landed these last few days.

You can order these online direct from FlatsHQ's website or find them locally at the Snook Hut in Cape Coral.  They're only $6.99 so pick up two.
Posted by Capt. Gregg at 6:50 PM