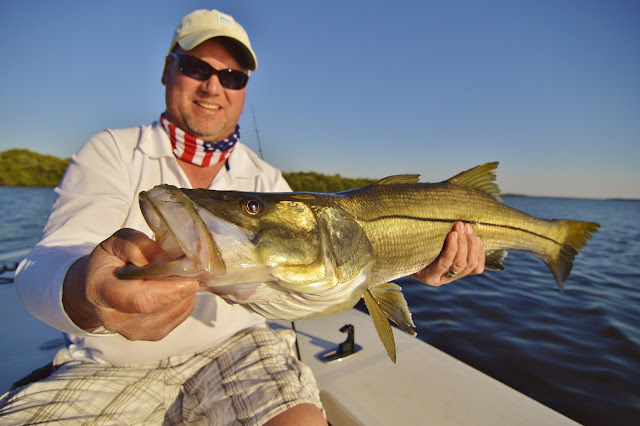 Welcome to September, the very best month to fish the flats around Pine Island and Matlacha as far as I’m concerned.  Everything you could possibly want to catch in the shallow water will be here in force and should stick around well into the fall.


Tarpon season is still in full swing as long as you’re looking for the smaller ones.  The huge migratory fish have moved along and won’t be back until next spring, but a few big stragglers can still be picked off in Charlotte Harbor and off the Gulf beaches.  The real action is happening in the dark waters of Matlacha Pass where hundreds of resident juveniles pop up at sunrise every calm morning.  These ten to twenty pounders are my favorite fish and the perfect fly rod species.  They spend the entire fight in the air and can be boated quickly without a lot of stress to both the tarpon and the angler.


Redfish are already pouring onto the flats in big schools as they get ready to spawn.  While there aren’t any negative low tides this month, which are always the best tailing conditions, we’ll still have long stretches of skinny water in the evenings when feeding reds are easy to spot.  Pine Island Sound has dozens of excellent flats but the huge stretch of water just north of Pineland Marina is often Ground Zero for schooling redfish.  I’ve seen them so thick out there that they look like a solid blob of orange coming towards my skiff.  These big schools aren’t an everyday sight but when it happens they’re easy to spot and even easier to catch.  Throw almost anything in front of them and you’ll get a strike.


Sea trout made a nice return in the middle of August and the cooler mornings of September give us even better conditions for this easy to catch gamefish.  Just about every angler in Southwest Florida knows that a Cajun Cork with a live shrimp or Gulp under it is both magic on trout and effortless to use.  They also love to eat flies and are a great species to target for beginners.  An inexpensive 8-weight and a handful of easy to tie Clouser Minnows will nail trout all day long.  Once again, the Pineland area is a great place to find these guys but you’ll want to get in a little deeper water than where you’d be searching for reds.  Three to five feet over the grass and sandy potholes is perfect, especially on rising tides during the morning hours.


Finally, snook season is once again open here on the west coast of Florida.   For those of you who are new to the area, keep in mind that you’ll need an additional $10 stamp on your saltwater license if you want to keep one of these fish.  Snook are some of the more heavily regulated species in Florida and rightly so.  Just taste one that’s been properly grilled and you’ll know why.  You have to work harder than ever to land a slot sized snook, which are between 28 to 33 inches and you’re only allowed one per day.   Even if you’re not interesting in keeping any, most of our shorelines will hold them.  I love working a topwater lure like a Zara Spook along the mangroves to get that explosive strike, especially at high tide, but a baitwell full of live pilchards is more effective than anything.


So that’s September in a nutshell, lots of fish and cooler weather.  And that’s not even the best part.  This is also one of the slowest months of the year for tourism and the majority of our snowbird residents are still up north.  If you’re out on the flats during most weekdays you’ll often have the water all to yourself.  Enjoy it while it lasts.
Posted by Capt. Gregg at 6:03 AM