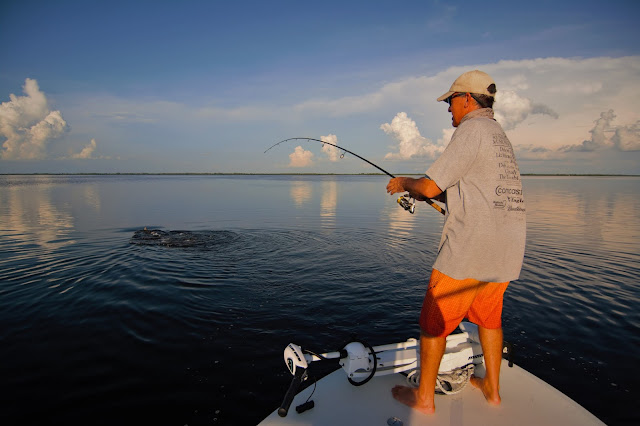 I really like this time of year since business slows down and I actually get a chance to fish.  I was out with my buddy Tim Gleason again last night looking for tailing reds near Bokeelia.  About an hour before low tide we spotted a large bull shark with its dorsal and tail fins cutting the foot-deep water's surface.  This is actually a common sight during the summer and I've probably seen this particular shark a dozen times on these flats.  They don't often hit artificials but I tossed a weedless jerk bait at its head and got an explosive take.  The shark then ripped off a hundred yards of braid and kicked up a rooster tail while it blasted off the flat.  Tim tried to motor after it but could barely get the Beavertail's prop underwater since we were that shallow.  After that first run I put my hand on the spool and it was very warm from the drag's friction.  I was amazed when we got the shark next to the boat since there was only fluorocarbon leader tied to the hook, but it didn't hold much longer.  The six-foot bull made one run and the braid popped, which was fine with me.  I had no plans of pulling this fish into Tim's skiff.  Even though we didn't nail any reds, this made my evening.  I don't target sharks as much as I used to but there's nothing else you'll find swimming as shallow that packs that kind of punch.