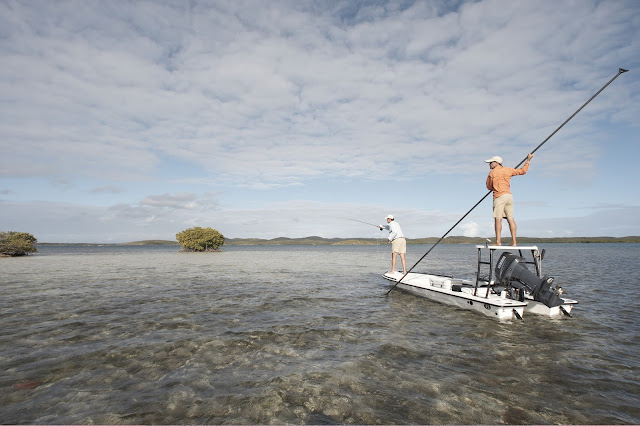 Communication between guide and angler is always crucial when we’re sight casting with fly rods on the flats. Everyone knows and uses the good old fashioned clock system where the bow of the bo is 12:00 and the stern is 6:00. I even knew a guide down in Key West who had all the numbers from 9:00 to 3:00 actually painted on his skiff. That way you had NO excuse for missing a shot. (And with this guy, God help you if you did miss.)

Even though I’d never deface the bow of my Beavertail by painting numbers on it, there is some merit to that idea. I’ve always make sure every new angler understands the clock positions and like every other guide, I always tell my anglers to immediately point their rods in the direction I’m talking about once I spot a fish. To get on target even quicker I have them hold their arm out at full extension and sight down both their arm and rod as if it were a shotgun barrel. This also lets me see exactly where they’re looking from the top of the skiff’s poling platform. Then I can tell my angler to move their rod up, down, left, or right until they’re pointing directly at the fish.

One other thing I always try to make clear is when to start casting the fly and, even more important, when to stop. I’ve often found that most new anglers begin their cast as soon as I say “Tailing redfish at 9:00,” whether we’re in range or not. A simple reminder to wait until I actually say “Go ahead and cast,” after we both have identified the target is important and might need repeating once or twice.

Taking too many false casts is also a common error made by a lot of anglers and usually results in a spooked fish. It’s an understandable mistake with beginners since they’re not used to judging distances on the open water. I always remind them that I have a great vantage point up on the poling platform and they need to trust me when I tell them to drop the fly. This usually sound like “Drop it. Drop it. DROP IT!” and they still wind up taking two or three extra false casts anyway. It usually only takes one good missed shot for anglers to realize that listening is just as important as seeing.
Posted by Capt. Gregg at 7:25 PM