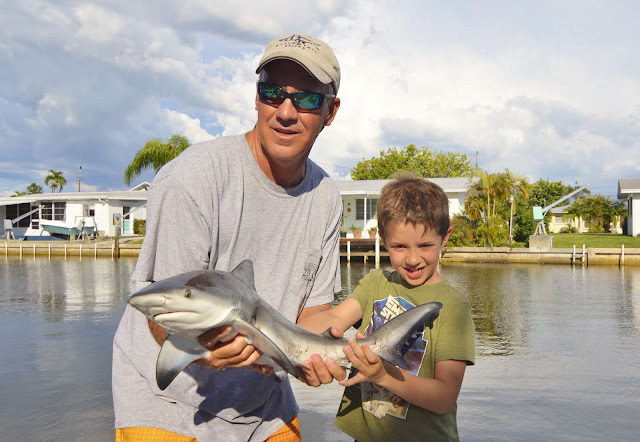 This is a first.  My nephew Matt and I were trying to catch catfish in my parent's canal when this juvenile bull shark swam right by their dock.  We tossed a dead pinfish in front of it which was eaten immediately.  A few minutes later we had the three foot shark in a net and then quickly back in the water after a few photos.  I've never seen, let alone caught, a shark of any kind in the canals on Matlacha or Pine Island but this wasn't too surprising.  Bull sharks are very common in our waters and the juveniles prefer the backcounty bays and creeks which hold lots of food and fewer large predators.  (Yes, bull sharks are very cannibalistic.)  A man-made canal is a perfect place for small bulls to hunt mullet and avoid their parents.  I'm not looking forward to diving down there later this week to fix my dad's snook light.
Posted by Capt. Gregg at 7:06 PM