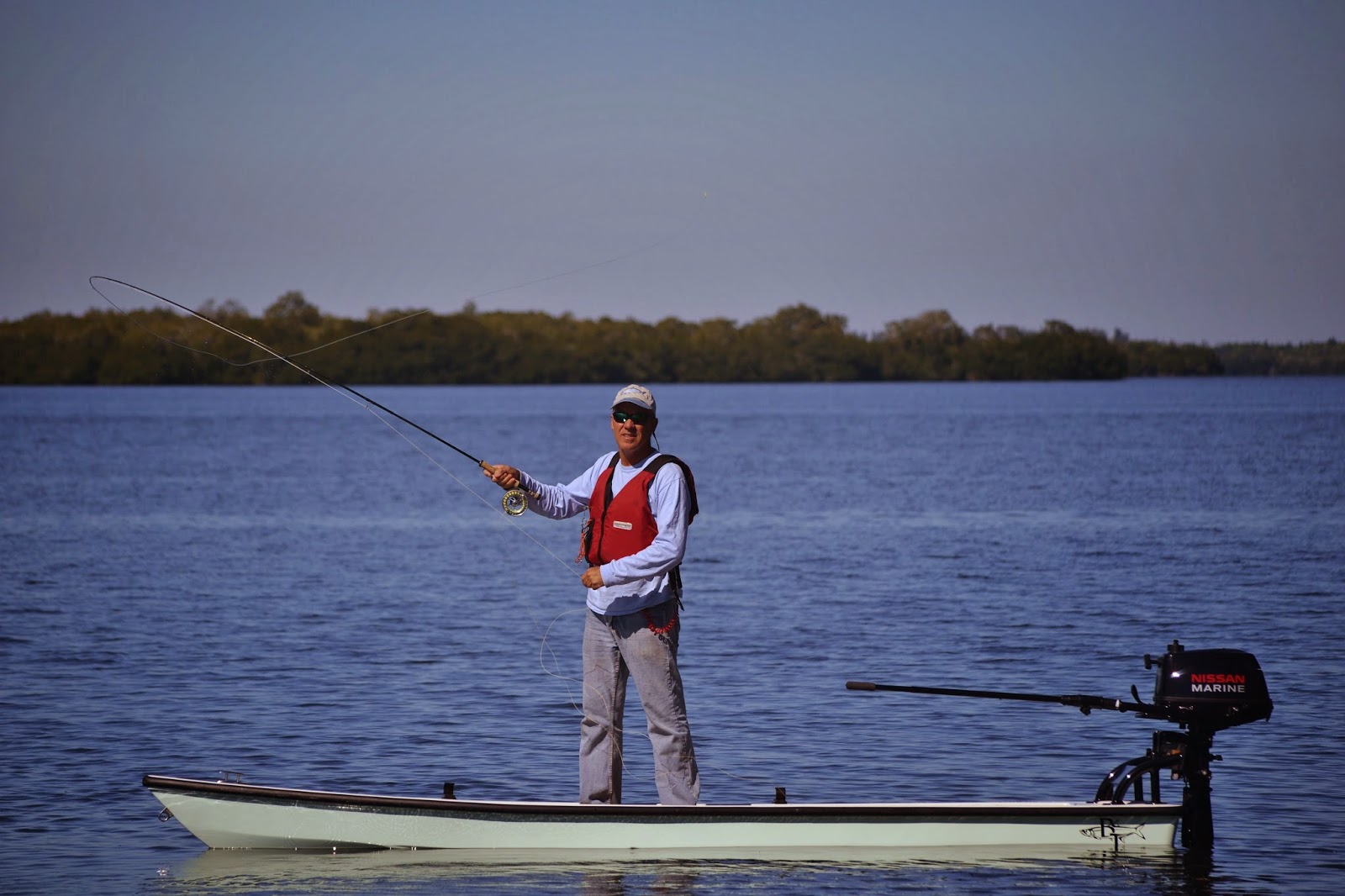 As a full time guide, I get asked by a lot of folks for my opinion on what type of flats boat they should buy for Pine Island and my answer usually surprises them.  I tell just about everyone to buy the smallest boat with the least amount of horsepower that will do everything you want.  It’s that very last part that’s most important.


Everywhere you look you’ll see flats and bay boats with 200hp motors or more, and those rigs definitely have their place.  But if you’re new to SW Florida and want to dedicate yourself to fishing our excellent shallows, you need to start out with something as basic as possible, and a microskiff is the way to go.


The term “microskiff” has only been around for a dozen years now but the boats themselves go back much further.  For most anglers it means a boat less than 18 feet long, designed for two people (a third is possible in some situations) and powered by no more than a 25 horsepower outboard.   Basically, these were the only kind of flats boats available until about 50 years ago.


The modern microskiff was actually designed by a rocket scientist.  Harley Gheen was a senior engineer at Cape Canaveral in the early 1960’s.  He was also an avid fisherman who loved poling the Indian River in his canoe and casting to the huge redfish that prowled those flats.  What Harley didn’t like was constantly being dumped out of his tippy craft every time he tried lifting one of these fish on board.  Between Gemini and Apollo launches he carved a new design at his desk from a hunk of balsa wood that would eventually become the Gheenoe (short for Gheen’s Canoe,) and 45 years later over 50,000 have been built.


Even if you’ve never heard of a Gheenoe, you’ve seen them at the boat ramp or parked outside the bait shops in the morning.  I’ve actually owned two over the last decade and will probably pick up another one in a few years for my kids to use.   A 15’ Gheenoe with a 15hp outboard is the perfect first boat for anyone looking to learn their way around the shallows of SW Florida.  They’re light enough to launch almost anywhere and fast enough to get you and another angler wherever you want to go.  When you run one hard aground (trust me, YOU WILL) they’re light enough for one person to drag back into deeper water.   A Gheenoe isn’t much fun to run in choppy conditions but they will teach you to when to head out and when to stay home.  Best of all, you can easily pick up a used Gheenoe for under $1000, and that price could include a small motor and trailer.


As a guide, I obviously need something with a little more capability and a lot more creature comforts.  My current boat is an 18’ Beavertail BT3 that can run three anglers and myself anywhere around Pine Island in almost any kind of weather.  It has all the features like a brand new Yamaha 4-stroke outboard, remote controlled Minn-Kota trolling motor and Power Pole, and a full color Garmin GPS.  The BT3 is an excellent machine and does everything I possibly want when I’m out with paying customers.


But on those rare days when I have a few hours to myself and the conditions are right, the 18’ BT3 stays in the driveway and my 13’ Beavertail Ambush hits the water with me.  This is the ultimate microskiff and is built for only one person with a maximum 6hp outboard.  It looks like a powered surfboard but is actually a very capable skinny water boat that will float shallower than most fishing kayaks.  I’ve used my Ambush to chase redfish on the Pine Island flats during some of this winter’s lowest tides without ever thinking about running aground.  I’ve also had a blast poking into some very narrow creeks that I never knew existed but took me to hidden pools of baby tarpon way back in the mangroves, (thank you, Google Earth.)  If I was starting from scratch with no knowledge of the waters around Pine Island, running around in an Ambush would be a great education.


Before you start boat shopping, take a minute and decide how you’ll be spending most of your time on the water.  Sometimes you really can do a lot more with a lot less.
Posted by Capt. Gregg at 12:45 PM