Spoon Flies For Redfish In October 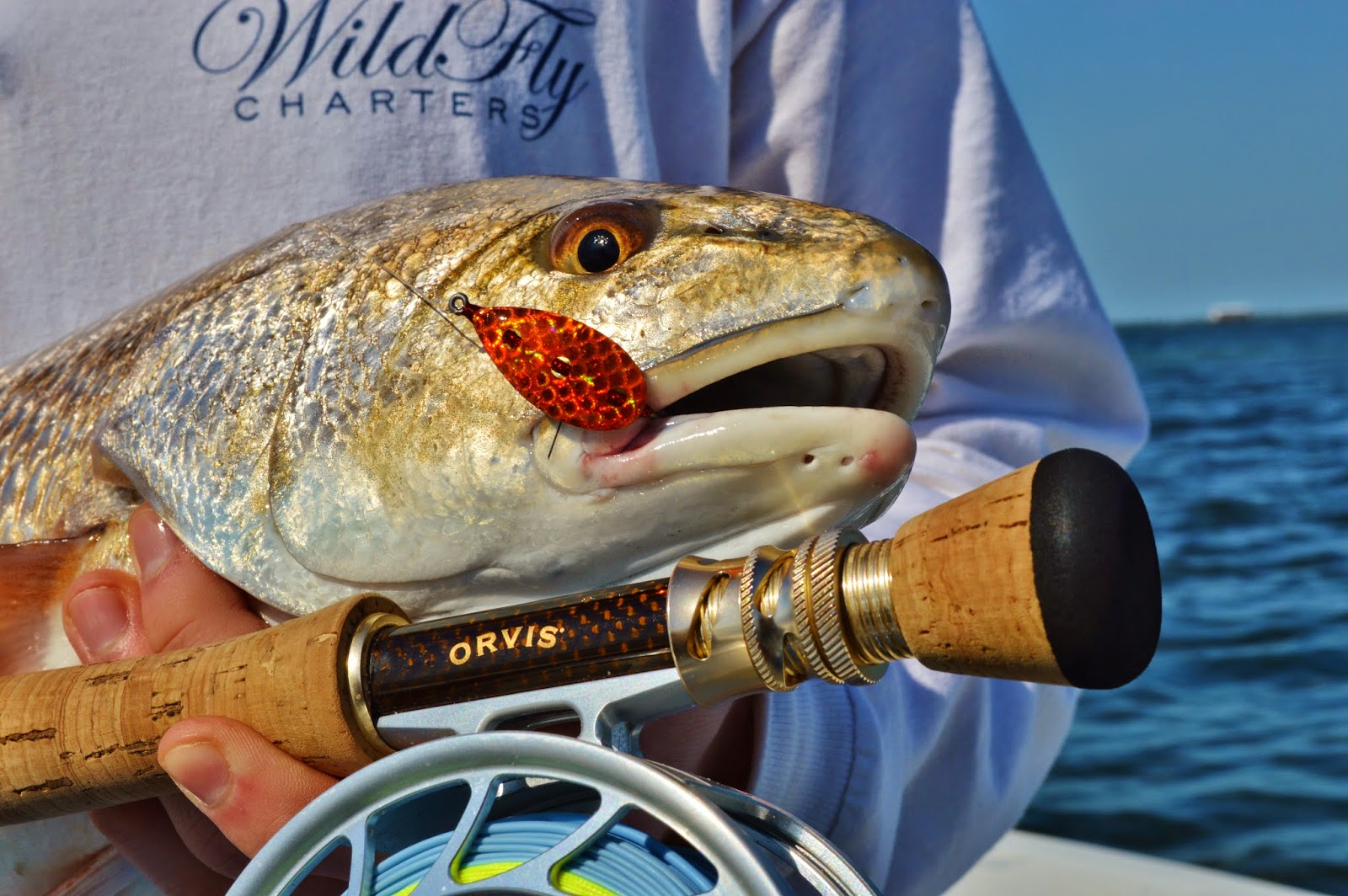 It’s October and we've got a lot of redfish prowling the Pine Island flats.  Even though our water is cooling off and clearing up, they can still be very difficult to spot unless they're tailing at low tide.  When you're lucky enough to find them doing this, getting one to eat a fly isn't always a sure thing.  That problem begins with the fact that a tailing redfish has already found a morsel of food on the bottom, usually a small crab hiding under the turtle grass, and is actively trying to get at it.  When a red's attention is focused it's hard to pull them away from an easy meal digging itself into the mud.  The best way to do that with a fly rod is to throw them something even easier to find and eat.

Most flies are designed to land softly on the surface and quietly slip through the water.  This rarely gets the attention of a redfish with its face in the mud, which is why I love throwing spoon flies.  These have been around since the 1980's and evolved into several unique configurations.  The first ones were made from ordinary tinfoil and a few anglers even used Lee Press-On Nails with great success, but it's the Mylar and epoxy patterns created by Gainesville's Capt. Jim Dupre that are my favorites for their pure simplicity.  These flies work no differently than the classic gold spoons that conventional anglers have used to catch all sorts of fish for more than a century.  They wobble and flash and generally make a great imitation of a crippled shiner, something irresistible to just about any predator in the ocean.

It's that wobble that's especially effective on tailing redfish.  With their eyes, nose and mouth buried in the mud, reds can still sense movement in the water though their lateral line, the powerful sensory organ that runs from the middle of their head to the back of their tails.  The vibration of the Dupre Spoon as it flutters by is very effective at tricking them into thinking a crippled baitfish right overhead.  That will quickly pull their mouths out of the mud and straight after the fly.

The Dupre Spoon is relatively easy to cast on a light fly rod like a 7-weight.  They’re a lot more aerodynamic than other spoons but when the wind kicks up you'll want to use an 8 or 9-weight rod to give them some extra punch.  You'll also want to land these flies right on top of most tailing redfish.  I actually aim for their heads, or at least where I think their heads might be in the dark water.  Yes, this will occasionally spook your target but most of the time it creates a reaction strike, especially when you're throwing into a school of tailing reds.  In most schooling situations, competition overcomes caution and the first fish to see the fly usually eats it.

One very important thing about almost all spoon flies is that they're easily made weedless.  A simple piece of wire or stiff mono tied at the eye of the hook and extending to the point will slide off most of the grass you'll pull it through on the flats.  This is very important since every angler knows that a hungry red will turn away from any artificial that's dragging even a bit of vegetation behind it.  A small, weedless spoon fly will maintain its action even in the thickest low tide grass.

The only drawbacks to the spoon fly is that they're not very easy to tie or inexpensive to purchase.  The Dupre Spoon that I like so much retails for around $7 in most shops and online.  That's a pretty steep markup for a few cents worth of materials, but in my book it's more than worth it.  Getting all of that Mylar and epoxy just right isn't easy and the flies themselves are almost as indestructible as their spin fishing counterparts made of actual metal.  Pick up a few Dupre Spoons if you don't have them in your box already.  When the reds are tailing in the thickest grass off Matlacha and Pine Island, there's no better fly to have on the end of your leader.
Posted by Capt. Gregg at 6:58 PM