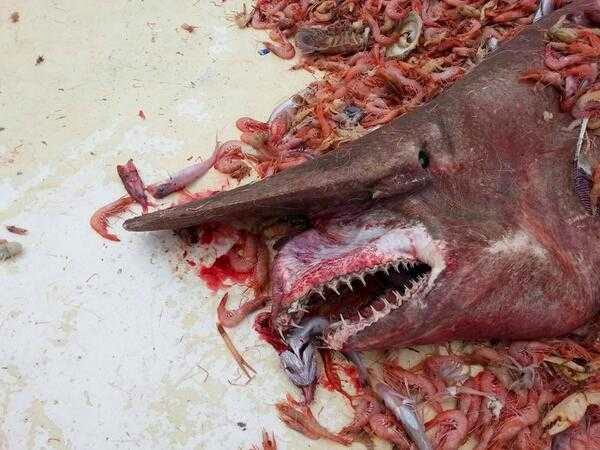 This story actually happened last month but is just going viral right now.  At least five different people have forwarded to me today so I'll go ahead and throw it up here, too:

This is actually the latest in a series of unusual shark sightings/catches down in the Keys that include a big great white spotted on the USS Vandenberg dive site and a full grown blue shark snagged in the mangroves off the Mud Keys.

The best part of these stories is that none of the sharks were killed, even the nightmarish looking goblin in the photo above was returned to the water by the shrimpers who landed it.  They deserve a ton of credit for that.

I absolutely HATE seeing dead sharks dragged on to the docks for ANY reason and make no secret of that to anyone who'll listen.  Nearly all oceanic shark species have been severely overfished during the past several decades and the horrible practice of finning continued unchecked until recently.  Don't get me wrong, I'm no vegan and love grilling up a good fish, but all sharks should be released unharmed.  They're far too valuable as apex predators and there are a lot of better things to eat out there anyway.

As far as I'm concerned, seeing these rare sharks like the goblin and great white in unusual places is a good sign and probably means their populations are actually increasing.  Let hope this continues.
Posted by Capt. Gregg at 7:41 PM