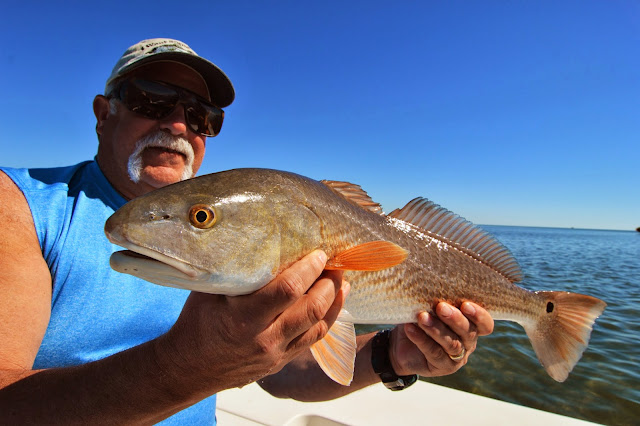 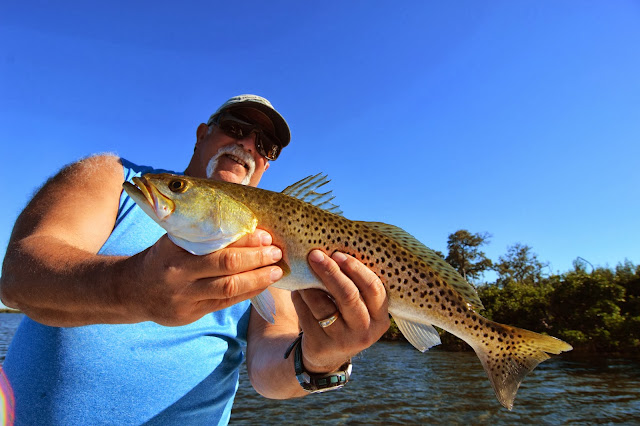 Bright blue skies made sight fishing in northern Pine Island Sound a blast over the last few days.  With water temps in the mid-60's the flats have been exceptionally clear and spotting the big schools of reds is easier than ever.  Unfortunately, getting close to them isn't a walk in the park.  They seem to spook exactly when my anglers start to think about casting, which isn't uncommon behavior on calm days.

Dr. Mark Lucas from Missouri finally made the fish cooperate and scored the 24" red and a handful of nice trout on live shrimp and Gulps this afternoon.  We hit the top of the tide around 1PM and the redfish were hanging on several oyster bars north of Useppa but vanished as soon as the water started falling.  The trout hit right at the end of the day and we didn't land any that were under the 15" slot.

We're looking at a great week with air temps in the mid-80's and no cold fronts in the forecast.  The water will hit the mid-70's in a few days so I plan on chasing tarpon on my next few charters.
Posted by Capt. Gregg at 6:47 PM

Email ThisBlogThis!Share to TwitterShare to FacebookShare to Pinterest
Labels: Angry Strongo, Pine Island, Wildfly Charters
Newer Post Older Post Home
Welcome to the Pine Island Angler. This blog is published from my home base on beautiful Matlacha, Florida where I run my guiding business Wildfly Charters. I started this site to provide regularly updated news about salt water flats fishing throughout Southwest Florida, the Keys, and many other Stateside and Caribbean locations. As a full time guide since 1995 I'm always looking for that next undiscovered spot or secret fly that will lead me to even better fishing and I'm happy to share what I find here on this site. I welcome any of your comments on all of my posts. Feel free to contact me with any questions by e-mail at gmckee1@hotmail.com or call me directly at (239)565-2960. Capt. Gregg McKee