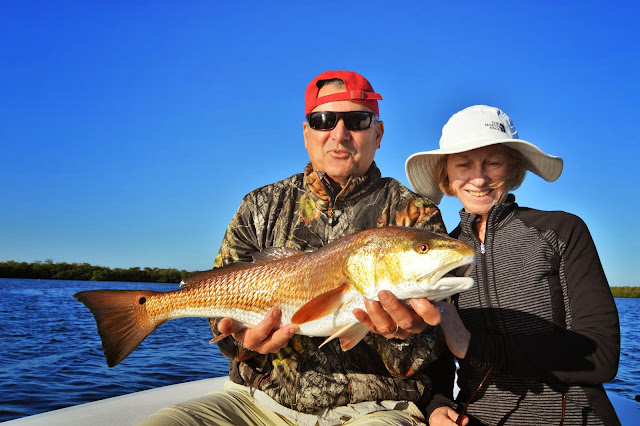 We avoided the Polar Vortex that much of the south received last week but a good amount of clouds and wind caused a handful of canceled trips and kept me onshore for several days. This morning's weather was flawless and the water temps were even higher than I expected, in the mid to upper-60s through most of Matlacha Pass.   I was fishing with anglers Steve and Terry Michaud, who were wise enough to flee the tundra of Minnesota for the waters of SW Florida this month.  Steve kicked things off by landing this perfect 26" redfish near Pine Island Creek just after low tide.  Unfortunately, things slowed right down after that and despite spooking a handful of big reds, we didn't boat any others this morning.


The redfish bite has been really slow for me all month and I'm hearing the same story from most of the anglers I talk to at the boat ramp.  We've got perfect tides for them but the mullet schools that they love to follow have gotten a bit scarce in the Pass.  I plan on hitting the flats of Pine Island Sound over the next three days and I'm counting one the brighter water out there to produce a few more big reds.  It usually does this time of year.


One final note.  If you're just looking to bend a rod there are plenty of short trout in the north part of Matlacha Pass as well as big ladyfish, too.  The dolphins are also out in force so use barbless hooks if you want what you release to stand a chance.
Posted by Capt. Gregg at 7:25 PM