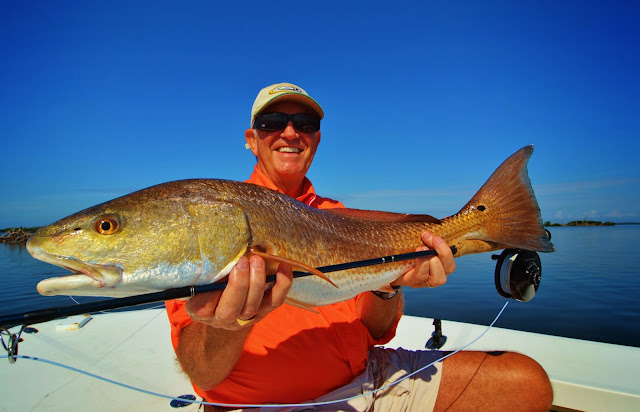 Negative low tides in the mornings gave us several perfect days to throw flies at tailing reds in both Matlacha Pass and Pine Island Sound.   Minnesota angler Reed Saunders, who just recently became a local snowbird, landed this excellent 27" beauty on fly with me yesterday near Cabbage Key.  He was casting a Dupre Spoon fly at this fish which was digging up the bottom in just over a foot of water.  Reed used the same pattern to land a 20" red in even shallower water an hour earlier that morning.

Sight casting to these fish is best accomplished when the water is as low as possible and the tide is just starting to flood.  If this happens in the mornings, starting about an hour after sunrise, then that's even better.  We've had these conditions all week and the cloudless blue skies have helped out tremendously.  Next week's tides aren't so hot in the mornings but the first week of December is going to be perfect.  I've still got a few days open then so give me a call if you want a shot at a big tailing red.
Posted by Capt. Gregg at 5:47 PM

Email ThisBlogThis!Share to TwitterShare to FacebookShare to Pinterest
Labels: Cabbage Key, fly fishing, Matlacha Fishing Guides, Pine Island, Pine Island Fishing Guides, redfish
Newer Post Older Post Home
Welcome to the Pine Island Angler. This blog is published from my home base on beautiful Matlacha, Florida where I run my guiding business Wildfly Charters. I started this site to provide regularly updated news about salt water flats fishing throughout Southwest Florida, the Keys, and many other Stateside and Caribbean locations. As a full time guide since 1995 I'm always looking for that next undiscovered spot or secret fly that will lead me to even better fishing and I'm happy to share what I find here on this site. I welcome any of your comments on all of my posts. Feel free to contact me with any questions by e-mail at gmckee1@hotmail.com or call me directly at (239)565-2960. Capt. Gregg McKee