One of my regular anglers is back is up in Ohio recovering from knee surgery and missing the hell out of tarpon fishing right now.  I published the article below about him last year in the Nautical Mile newspaper.  I'm rerunning it again in hopes of speeding up his rehab.  ﻿ 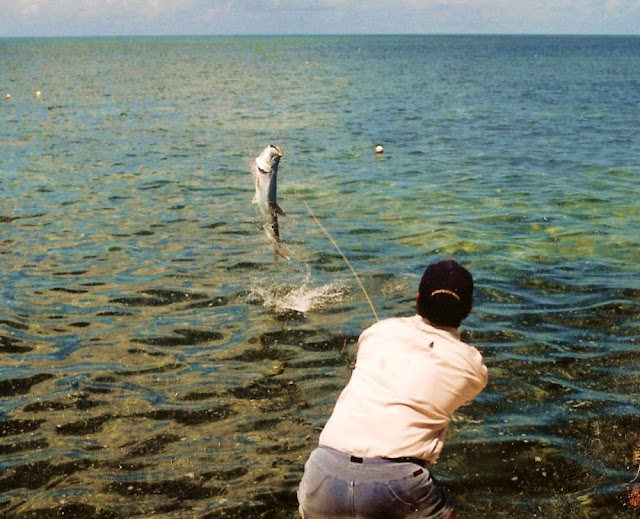 
I wasn’t annoyed by this since I knew they had a long drive to Matlacha from their house, but I found it a little surprising since I knew how eager they were for this trip.  We were going after tarpon and the conditions were perfect, a cloudless sky, no wind, and a tide that just started rising along with the sun.


It was the complete opposite of the morning we had just one month earlier.  Our first trip together happened just after a nasty March cold front with twenty knot winds that churned up the flats and made sight casting almost impossible.  I fought a constant battle just to keep control of the skiff but Don still managed to land a nice legal-sized redfish on fly early that morning.  Sally followed up with one of her own on spinning gear just before lunch.


They were the first new clients I’d fished with in some time and we were off to a lucky start.  They were also that perfect combination of good anglers who were easy to deal with on a tough day, so I was more than happy when Don started talking about booking a tarpon trip with me in early April.


Over the next three weeks I fielded lots of phone calls and e-mails from Don about flies, fly lines, leaders, and hook sizes.  Believe it or not, I actually like getting calls at dinnertime from my clients asking me questions like “I’m tying some Tarpon Toads, should I use rabbit fur or marabou for the tails?”  I take that as a sign of a serious angler, and Don was definitely serious.


That’s why I found his tardiness that morning kind of puzzling.  But he and Sally were willing to come all the up from Estero to fish with me again so I let it slide when they finally rolled into the parking lot.  It was a few minutes before 8AM when we motored away from the dock and there was still plenty of morning left for us.


Matlacha Pass was flat calm and the run up to Charlotte Harbor went quickly.  The water was gin clear and 76 degrees, perfect conditions to find some big tarpon.  We rounded the north tip of Pine Island and I aimed my Beavertail skiff west and pressed on until the shoreline of Gasparilla came into view.  A few minutes later we were approaching the shallows of my favorite tarpon spot.  Just as I was pulling back the throttle I noticed the other boat coming from the west and aiming for the same sand bar.  He came off plane first and idled right up to the edge of the flat.  There was a lone angler running the boat, which was a very expensive looking Hell’s Bay, and he immediately jumped up to the bow with a fly rod and started his trolling motor.


Now I was annoyed.  Someone had beaten me to my spot by less than a minute and was in position to get the first shots at every fish running down the flat.  If Don and Sally had been on time we would have been well in front of this guy.  I grumbled a bit but there was nothing to be done about it.  I decided to just drop my Power Pole and let the other skiff move down the flat, silently praying that I wouldn’t witness him hook a tarpon right in front of us.


I had Don step on the bow and make some practice casts until the Hell’s Bay was far enough away from me.  After several minutes I lifted the anchor and started poling across the three foot deep sand.  I kept an eye on the other boat and just a few minutes later the angler stepped off the deck and slowly motored off the flat without making a single cast.  Now we had the stretch of water to ourselves but I was worried that the other angler left because there were no tarpon.


It was just after 9AM and the sun was hitting the water at a perfect angle.  I could see everything within 200 yards of us and a big tarpon would be really obvious.  I could also see the top of the Boca Grande lighthouse straight to my west.  There would be hundreds, maybe thousands of tarpon pouring through the famous pass that morning.  There would also be dozens of big center console boats drifting and motoring through the mile wide cut slinging live bait and heavy jigs at the mass of fish rolling in the deep water off Gasparilla.


Boca Grande Pass was only a few minutes away but it was the far side of the moon as far as I was concerned.  The full contact style of fishing they do out there is the polar opposite of the way I chase tarpon.  I would rather get a single jump from one on a fly rod than muscle in a dozen fish using big conventional reels.  But the way the flat seemed this morning, getting Don that one jump was looking doubtful.


I quietly cursed at myself over the next few minutes for not insisting we leave a half hour earlier, convinced we already missed our short window at any fish.  Tarpon are often a sunrise deal on the flats and it was now almost 9:30.  That’s when I saw the black spot in the water quickly moving towards us.


I spun the boat with the push pole as fast as I could to give Don a downwind shot.  The fish sensed the sudden motion and made a quick left turn off the bright sand and into the darker grass, giving Don a lousy angle but I had him Hail Mary a cast straight off the bow to where I thought the tarpon might be heading.  The purple fly was invisible once it hit the dark water and our one shot looked finished.  I was just about to have Don try one more throw when the slack line from his rod tip twanged tight like the arresting cable on an aircraft carrier.


We never saw the fish eat the fly but we all witnessed the aftermath.  Six feet and well over one hundred pounds of brilliant silver tarpon came rocketing through the surface just twenty feet from my bow.  The huge fish seemed to freeze for a moment in the air, completely out of the water and in that perfect mouth open, gills flared pose that every taxidermist loves to replicate.  From the poling platform I had a fantastic view of the sparkling tarpon and several bucket’s full of spray flying through the air, with Don just below me locked on to his heavily bowed fly rod.  It’s a sight I’ve witnessed countless times and still never get to see enough.


The tarpon smashed back into the water a heartbeat later and it was all done.  Without seeing the fish eat, Don never had a chance to set the hook with the necessary violence that tarpon require from a fly rod.  Sally was poised between us with the camera ready to capture a second jump that wasn’t going to happen.  The fish disappeared as quickly as it arrived.  It was one of the largest I’d ever seen off Pine Island.


It was also our only hookup of the day.  We moved on to other flats and cast to a dozen other fish but none would play the game.  I wasn’t too disappointed.  It was early April and tarpon season was just beginning.  This time of year I often hook these fish through a combination of blind luck and just being in the right place at the right time.


I thought about that as we ran home around lunchtime.  We were definitely in the right place that morning.  And we were there at the right time all because Don and Sally were fifteen minutes late.
Posted by Capt. Gregg at 1:03 PM

Email ThisBlogThis!Share to TwitterShare to FacebookShare to Pinterest
Labels: Pine Island Fishing Guides, Pine Island Tarpon, Tarpon Season, Wildfly Charters
Newer Post Older Post Home
Welcome to the Pine Island Angler. This blog is published from my home base on beautiful Matlacha, Florida where I run my guiding business Wildfly Charters. I started this site to provide regularly updated news about salt water flats fishing throughout Southwest Florida, the Keys, and many other Stateside and Caribbean locations. As a full time guide since 1995 I'm always looking for that next undiscovered spot or secret fly that will lead me to even better fishing and I'm happy to share what I find here on this site. I welcome any of your comments on all of my posts. Feel free to contact me with any questions by e-mail at gmckee1@hotmail.com or call me directly at (239)565-2960. Capt. Gregg McKee