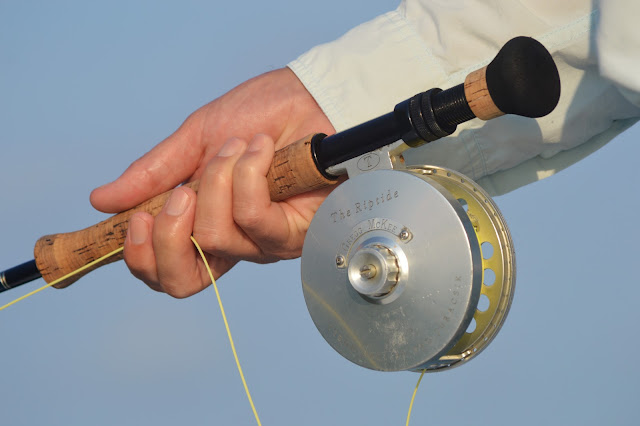 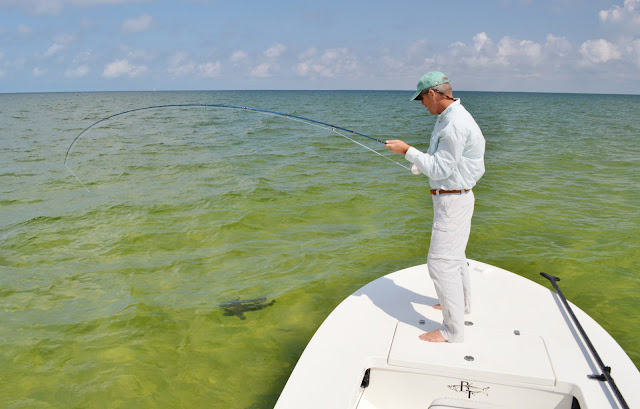 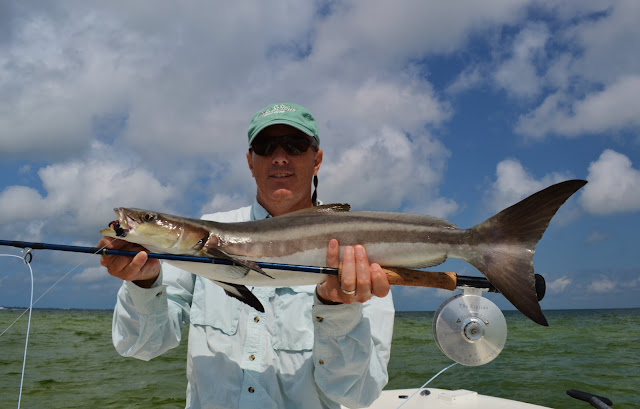 When the tarpon don't want to bite you'll throw your flies at anything on the flats.  It's an added bonus when those targets turn out to be big cobia.  Local angler Dan Pontius scored this 27 incher just south of Burnt Store Marine this morning.  He was casting a 2/0 Tarpon Toad at a pack of these fish following a big stingray.

Cobia are a common sportfish throughout the Gulf and all the way down to the Keys but this was the first fly caught one on my boat this year.  When these fish hang on the backs of rays they'll hit almost anything that moves  As an added bonus, cobia are one of the best tasting things that swims. A legal cobia has to be 33 inches at the fork of its tail so the one in this photo went back to grow a bit.  Dan just missed landing a much bigger fish a short time later when we found a pod of five cobes following another ray.  He made a pefect shot but a dinky 20 incher shot forward and stole the fly from big daddy.  There was no grilled cobia for us today but there are plenty of these guys out there right now.  A fair trade when the tarpon don't eat.
Posted by Capt. Gregg at 6:22 PM

Email ThisBlogThis!Share to TwitterShare to FacebookShare to Pinterest
Labels: cobia, fly fishing, Pine Island Fishing Guides, Tarpon Season, Wildfly Charters
Newer Post Older Post Home
Welcome to the Pine Island Angler. This blog is published from my home base on beautiful Matlacha, Florida where I run my guiding business Wildfly Charters. I started this site to provide regularly updated news about salt water flats fishing throughout Southwest Florida, the Keys, and many other Stateside and Caribbean locations. As a full time guide since 1995 I'm always looking for that next undiscovered spot or secret fly that will lead me to even better fishing and I'm happy to share what I find here on this site. I welcome any of your comments on all of my posts. Feel free to contact me with any questions by e-mail at gmckee1@hotmail.com or call me directly at (239)565-2960. Capt. Gregg McKee