Driving a flats boat while you're sitting down might be comfortable, especially in choppy water, but it's not a good idea.  When I first started fishing down in the Keys a veteran guide advised me to always stand up while I was running the boat so I could what I was about to hit.  Even though I followed his advise religiously, over the next ten years I still managed to snag dozens of crab traps, smash into a submerged Cuban raft, and wreck a prop and lower unit thanks to a piece of rebar shoved into the bottom.  Driving my boat from a seated position would have made things even worse.

There are lots of hazards out there on the flats, especially here in the darker waters surrounding Pine Island, from slow moving manatees to non moving oyster bars.  Despite all that, I'm amazed at how many guys I see out there running full throttle sitting behing the wheel with a passenger direcly in front of them.  Stand up and keep your eyes at least two boat lengths ahead at all times.  As an added bonus, you'll be amazed at how many fish you can spot and come back to later.  And wear your kill switch, too.  More on that later. 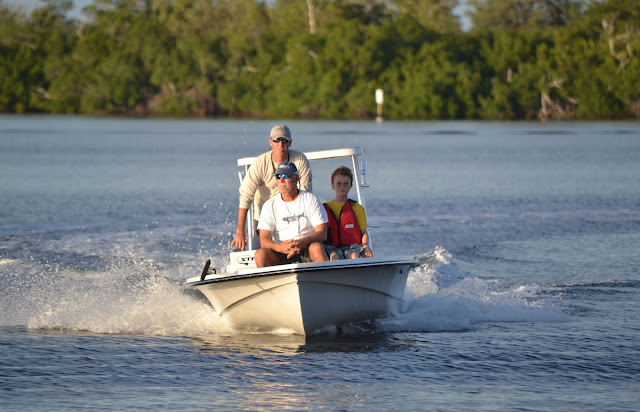 Email ThisBlogThis!Share to TwitterShare to FacebookShare to Pinterest
Labels: Beavertail Skiffs, Beavertail Strike, Beavertail Vengeance, flats boats, Mike Bartlett
Newer Post Older Post Home
Welcome to the Pine Island Angler. This blog is published from my home base on beautiful Matlacha, Florida where I run my guiding business Wildfly Charters. I started this site to provide regularly updated news about salt water flats fishing throughout Southwest Florida, the Keys, and many other Stateside and Caribbean locations. As a full time guide since 1995 I'm always looking for that next undiscovered spot or secret fly that will lead me to even better fishing and I'm happy to share what I find here on this site. I welcome any of your comments on all of my posts. Feel free to contact me with any questions by e-mail at gmckee1@hotmail.com or call me directly at (239)565-2960. Capt. Gregg McKee