How To Catch More Tarpon On Pine Island 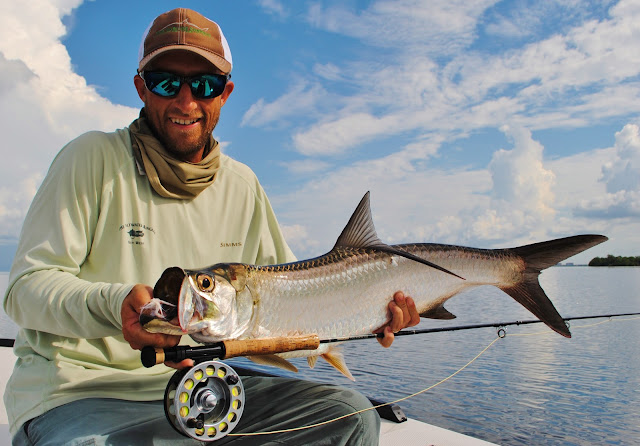 March means that tarpon season is right around the corner here on Pine Island and this article is for those of you who are new to the sport and hoping to land your first silver king with a fly rod.  Here are five things I’ve learned over the past seventeen years of chasing these fish for a living that will both increase your odds and simplify the process.

1. Use a lighter fly rod. You really don't need anything heavier than a 10-weight to catch the majority of tarpon you'll encounter off Pine Island. Mid-range saltwater rods are not only easier to cast but the lighter lines hit the water with less impact. This is less likely to spook these fish, especially given our calm conditions most of year. Yes, there are some true monsters that swim through Charlotte Harbor and the Gulf beaches, but concentrate on the smaller tarpon before you work your way up to the 12-weight fish.

2. Use a heavier leader. If you’re not trying to set a world record then there's no reason to use anything less than 20# test for your class tippet. In fact, I know several guides who simply use a single, nine foot long piece of 30# fluorocarbon as their entire leader. This eliminates any knots and it's invisible in the water. It's also more than strong enough to let you muscle a mid-size tarpon to the boat quickly. That's important since a long battle, especially in the hot summertime water, is a sure way to kill these fish. Get them in fast and they’re less likely to become shark food after you release them.

3. Use a lighter shock leader. The straight 30# leader idea is great but I still like to tie in 18” of 40# fluorocarbon as a shock leader. Even small tarpon have a mouth that feels like a cinder block so something a little heavier at the hook stops them from rubbing through the leader. In the spring and early summer, when the seriously big fish are around I'll bump it up to 60# fluorocarbon. In fifteen years I've only had a handful of tarpon wear through that size shock leader. Use anything heavier and the fish is more likely to see it and less likely to eat the fly.

4. Use sharper hooks. It's hard to find tarpon flies these days that are not tied on pre-sharpened, cutting edged hooks. If you’re tying your own flies then spend the extra money and get the best hooks possible. My favorites are the SSW style Owner Cutting Point in size 2/0. They're wickedly sharp and penetrate the tarpon's mouth better than anything else I’ve seen. They also have a small barb that holds beautifully but is still easily removed from the fish. A package of eight costs around $5 but they're well worth it.

5. Use your drag. This is the most important thing of all.  When I was guiding down in Key West my buddies and I had a rule that three jumps from a tarpon counted as a caught fish. After the third jump, getting it up to the boat was just a formality. Everyone should consider this rule since it’s easier on both the fish and the angler.
As a beginner I lost way too many tarpon because I babied them during the fight. I'd give them too much slack and barely pull on them for fear of breaking the light tippets I used. In other words, I was so afraid of losing the fish that I'd eventually lose the fish.

That changed one summer when I had a client nearly pass out from heat exhaustion while fighting a really big tarpon. He actually dropped to his knees on my deck but managed to hang on to his rod.  It scared the hell out of me since I thought he was having a heart attack.  While he chugged some ice water I took his rod and covertly cranked down the drag all the way down on his Tibor reel, hoping the fish would break itself off before the guy dropped dead on my bow. Instead of that happening, when my angler recovered he quickly found himself in complete control of the tarpon for the first time in over an hour. Five minutes later we had the 100 pounder next to the boat and both angler and fish survived the ordeal. In other words, start off with a light drag but right after that third jump is the time to really beat on them.  You’re not going to keep any tarpon so don’t be afraid of losing one.


Good luck out there and hope this helps.
Posted by Capt. Gregg at 6:40 PM

Email ThisBlogThis!Share to TwitterShare to FacebookShare to Pinterest
Labels: fly fishing, Juvenile Tarpon, Matlacha, Pine Island, tarpon, tarpon photos
Newer Post Older Post Home
Welcome to the Pine Island Angler. This blog is published from my home base on beautiful Matlacha, Florida where I run my guiding business Wildfly Charters. I started this site to provide regularly updated news about salt water flats fishing throughout Southwest Florida, the Keys, and many other Stateside and Caribbean locations. As a full time guide since 1995 I'm always looking for that next undiscovered spot or secret fly that will lead me to even better fishing and I'm happy to share what I find here on this site. I welcome any of your comments on all of my posts. Feel free to contact me with any questions by e-mail at gmckee1@hotmail.com or call me directly at (239)565-2960. Capt. Gregg McKee