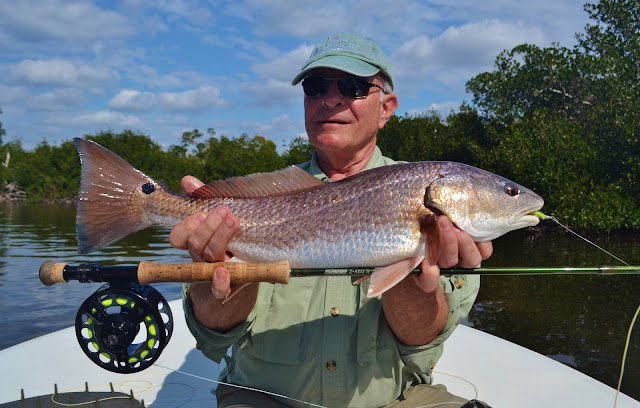 I've been hearing reports that a red tide had moved its way into parts of Pine Island Sound last week and that's definitely the case.  It's not that bad but while fishing in the northern waters around Patricio Island there was no bait around and the only mullet we saw were a few scattered dead ones.  The same was true for the flats off Cabbage Key over the weekend.  If you're not familiar with red tides keep in mind that they are an entirely natural event and are not caused by Global Warming, the BP oil spill, the NRA, or an other thing the media might choose to blame this week.  Red tides are a phenomenon know as an algal bloom and have been occurring as long as there has been life in the oceans.  Don't worry, this one will eventually dissipate and Pine Island Sound will return to normal.

On a positive note, Matlacha Pass is totally unaffected by the tide and lots of redfish, snook, and trout are around right now.  They haven't exactly been jumping in the boat for me but a well place fly will definitely get eaten.  Don Atkinson from Ohio, one of my favorite regular anglers, came back to fish with me yesterday and scored this perfect 22 inch red on a green and white Clouser Minnow in the northern part of the Pass.  We were sight casting to several fish cruising along the mangroves just before noon when the visibility was best.  There were more snook in the back bays than anything else but flies weren't on the menu for them.  We've got lots of nice low water in the mornings and if the wind would ever quit the redfish should tail like crazy again.  Looking forward to February and some warmer water, too.

Email ThisBlogThis!Share to TwitterShare to FacebookShare to Pinterest
Labels: fly fishing, Matlacha, Pine Island, redfish
Newer Post Older Post Home
Welcome to the Pine Island Angler. This blog is published from my home base on beautiful Matlacha, Florida where I run my guiding business Wildfly Charters. I started this site to provide regularly updated news about salt water flats fishing throughout Southwest Florida, the Keys, and many other Stateside and Caribbean locations. As a full time guide since 1995 I'm always looking for that next undiscovered spot or secret fly that will lead me to even better fishing and I'm happy to share what I find here on this site. I welcome any of your comments on all of my posts. Feel free to contact me with any questions by e-mail at gmckee1@hotmail.com or call me directly at (239)565-2960. Capt. Gregg McKee