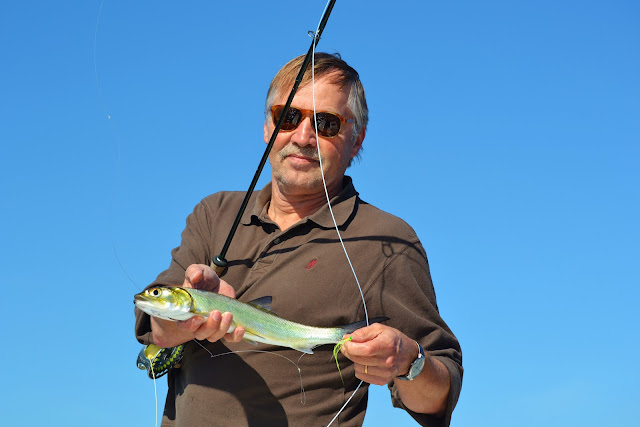 I finished the last year off with a whimper but started the new one off with a bang. The final fish caught on my boat in 2012 was the half pound ladyfish that angler Per Stuhag traveled all the way from Denmark to land on a very slow New Year's Eve charter. He and his sons worked hard but the cold water and lousy tides chased all the redfish out of Matlacha Pass for us.

But we started things off right with this 20" trout on the very first cast of 2013. 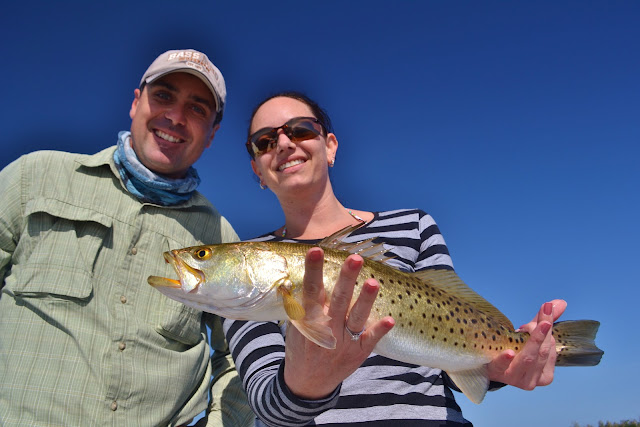 Capt. Paul Castellano came down from Ontario to throw flies at some big Pine Island redfish and fortunately brought his fiance Alison along to actually catch them.  In fairness to Paul, the reds were really thin out there for the first few hours of the morning and only gave him a few good shots with the fly rod.  Then the clouds moved in and wiped our or visibility, making us switch to spinning gear. 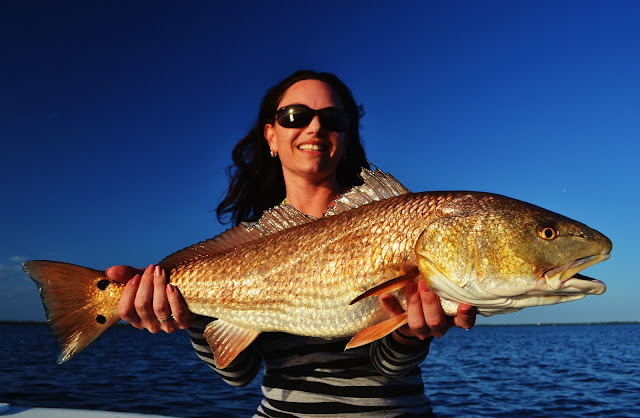 The first red of 2013 was this perfect fish, just under 27", that Alison landed on a Gulp Shrimp just north of Matlacha an hour before sunset.  New Year's Day was also a little slow but a notable improvement from the previous morning.  The water temps jumped up significantly and by the end of the day were nudging the 70 degree mark.  With no more cold fronts in the immediate forecast, the rest of the week should give us a return to the action we saw before Christmas.
Posted by Capt. Gregg at 6:16 PM

Email ThisBlogThis!Share to TwitterShare to FacebookShare to Pinterest
Labels: Pine Island, redfish
Newer Post Older Post Home
Welcome to the Pine Island Angler. This blog is published from my home base on beautiful Matlacha, Florida where I run my guiding business Wildfly Charters. I started this site to provide regularly updated news about salt water flats fishing throughout Southwest Florida, the Keys, and many other Stateside and Caribbean locations. As a full time guide since 1995 I'm always looking for that next undiscovered spot or secret fly that will lead me to even better fishing and I'm happy to share what I find here on this site. I welcome any of your comments on all of my posts. Feel free to contact me with any questions by e-mail at gmckee1@hotmail.com or call me directly at (239)565-2960. Capt. Gregg McKee