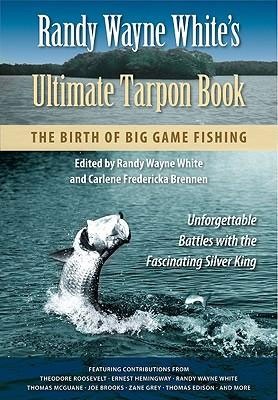 Today was a windy, rainy mess and I canceled my charter, a great local fly angler who fishes with me quite a bit.  To make matters worse, we had excellent tides and the flats have been covered with redfish.  It would have been a fantastic day had the weather just cooperated.

Instead of banging my head against my tying desk I cheered myself up a bit by re-reading parts of local author Randy Wayne White's "Ultimate Tarpon Book," which was published in 2010.  If you don't own a copy just stop what you're doing and buy one right now.  This book is actually a collection of newspaper and magazine articles from various authors, many of which were written between 50 to 125 yeas ago.

Most of you know Randy White as the Pine Island based creator of the hugely popular "Doc Ford" novels, but I'm a much bigger fan of his non-fiction and "Ultimate Tarpon" is his best work yet.  Even though his role here is actually editing together almost 200 different authors, this book tells the history of tarpon fishing in Southwest Florida better than any single writer could have managed.

And for those of you who didn't know, the sport was actually started here, not down in the Keys.  The very first tarpon ever caught on a rod and reel happened off Punta Rassa, between Sanibel and Ft. Myers, back in 1885.  No one even thought of fishing the Keys at that time until the railroad was built almost 30 years later.

Even if you're not into fishing, there's tons of great local history on almost every page.  Did you know that there was once a four star hotel located in St. James City, catering to wealthy anglers (the only kind of anglers at the time) and their wives?  Or did you know that black bear were so common they were hunted on Ft. Myers beach as they dug up sea turtle eggs?  Well now you do!  I toss out bits of info like that to my anglers all the time while I'm poling them across the flats.  I'm probably a lot more interesting to fish with thanks to this book.  Thanks, Randy.

Email ThisBlogThis!Share to TwitterShare to FacebookShare to Pinterest
Labels: books, fly fishing, Pine Island, Sanibel, tarpon
Newer Post Older Post Home
Welcome to the Pine Island Angler. This blog is published from my home base on beautiful Matlacha, Florida where I run my guiding business Wildfly Charters. I started this site to provide regularly updated news about salt water flats fishing throughout Southwest Florida, the Keys, and many other Stateside and Caribbean locations. As a full time guide since 1995 I'm always looking for that next undiscovered spot or secret fly that will lead me to even better fishing and I'm happy to share what I find here on this site. I welcome any of your comments on all of my posts. Feel free to contact me with any questions by e-mail at gmckee1@hotmail.com or call me directly at (239)565-2960. Capt. Gregg McKee