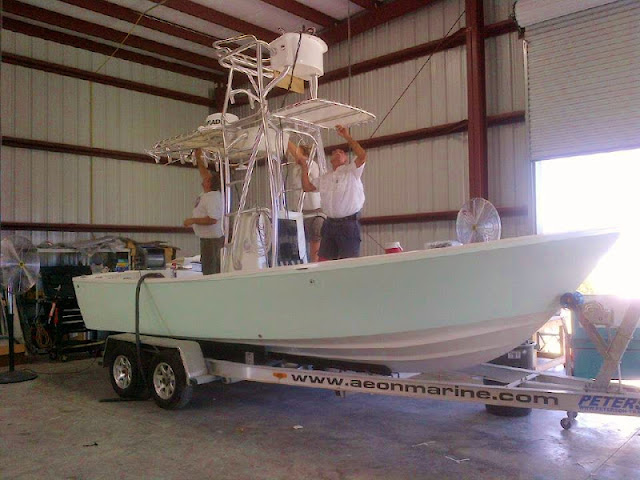 I had a chance to catch up with the owners of Aeon Marine in Palmetto yesterday and there are some really interesting things coming out of the factory over the next few months.  For starters, a couple of new boats will join the lineup by the end of the year.  I've seen them and know most of their details but the most impressive thing about these hulls will be their price.  Just like the current Aeon 23 and Beavertail skiffs, the new boats will run thousands of dollars less than their competitor's models.

The fall boat show season is here and Aeon should announce their schedule soon but the Tampa Convention Center show starting on Sept. 28 is a sure thing.  One of the new Aeons will make its debut there so be sure to stop by and say hi to Will and Liz.  You can check their Facebook page for more updates.  I'll probably be at their booth answering questions about the Beavertails on at least two of those days.  See you there.
Posted by Capt. Gregg at 12:33 PM

Email ThisBlogThis!Share to TwitterShare to FacebookShare to Pinterest
Labels: Aeon Marine, Beavertail Skiffs
Newer Post Older Post Home
Welcome to the Pine Island Angler. This blog is published from my home base on beautiful Matlacha, Florida where I run my guiding business Wildfly Charters. I started this site to provide regularly updated news about salt water flats fishing throughout Southwest Florida, the Keys, and many other Stateside and Caribbean locations. As a full time guide since 1995 I'm always looking for that next undiscovered spot or secret fly that will lead me to even better fishing and I'm happy to share what I find here on this site. I welcome any of your comments on all of my posts. Feel free to contact me with any questions by e-mail at gmckee1@hotmail.com or call me directly at (239)565-2960. Capt. Gregg McKee