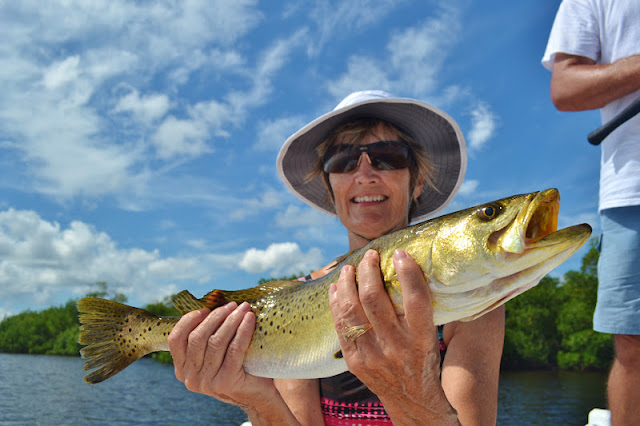 September is coming to a close and it was a really great month overall.  The redfish have been everywhere and almost every one we brought to the boat was slot legal.  I take that as a sign of a very healthy population of these fish.

The trout are always easy to find in the fall and my anglers have landed some serious gators in the last two weeks.  Jerry Francis from Georgia landed the beautiful 21 incher in the photo above on the Indian Field flats north of Matlacha.  This was one of three big sea trout she caught within twenty minutes on that one particular flat, all on Gulp shrimp.

Speaking of Gulps, everyone who uses these baits knows that pinfish love to nip at them, which is both annoying and expensive after enough are ruined.  I've noticed that some colors are more attractive to pinfish than others and the New Penny shrimp are on top of that list.  They also don't seem to be as tough as other Gulps and get ripped apart really quick.  The White 3" shrimp hold up really well and don't seem to draw as much attention from the pinfish but the reds, snook and trout still love them.  I buy them in the big $39 buckets which is enough baits for an entire month.
Posted by Capt. Gregg at 3:54 PM

Email ThisBlogThis!Share to TwitterShare to FacebookShare to Pinterest
Labels: Matlacha, sea trout
Newer Post Older Post Home
Welcome to the Pine Island Angler. This blog is published from my home base on beautiful Matlacha, Florida where I run my guiding business Wildfly Charters. I started this site to provide regularly updated news about salt water flats fishing throughout Southwest Florida, the Keys, and many other Stateside and Caribbean locations. As a full time guide since 1995 I'm always looking for that next undiscovered spot or secret fly that will lead me to even better fishing and I'm happy to share what I find here on this site. I welcome any of your comments on all of my posts. Feel free to contact me with any questions by e-mail at gmckee1@hotmail.com or call me directly at (239)565-2960. Capt. Gregg McKee