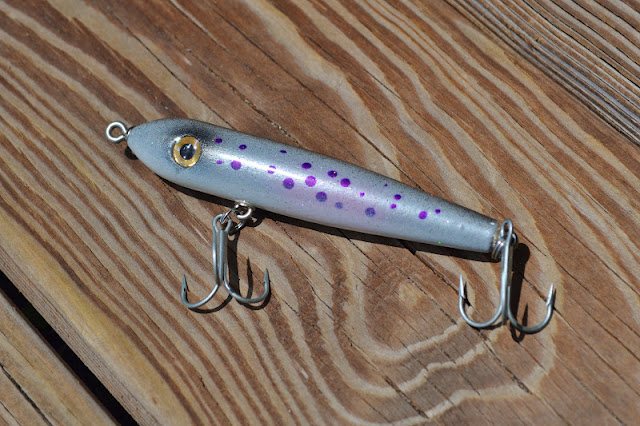 Last week I met an east coast angler who gave me a great looking wooden lure to try here on the Gulf coast.  It's called a Top Chub and is made by a small Boynton Beach company called Impact Lures.

Its action is very similar to the Zara Spook, my favorite artificial of all time, and it's very easy to mimic the walk-the-dog retrieve with this hand made topwater.  Unlike the Spook, if you give the Top Chub a fast crank it has an erratic twitching action just under the surface which would be hard to resist for an aggressive predator like a barracuda or bluefish.  Also unlike the Spook, the treble hooks on the Top Chub don't look like they'll straighten out if a really big redfish starts pulling on one.  I don't know the exact brand of hook that Impact uses but they seem much more substantial than the ones that Heddon puts on their product.

The only fault I can find with this lure is that it's really great looking and I know that an actual person spent some time making it.  I'm going to feel really bad when a big red chews on it for a while and messes up the paint job.  The Top Chub sells for only $7.99 which is a very competitive price for a good surface lure.  They're definitely worth a look and it's nice to have something made by a skilled American in my tackle box.
Posted by Capt. Gregg at 7:22 PM