From this month's Nautical Mile magazine. 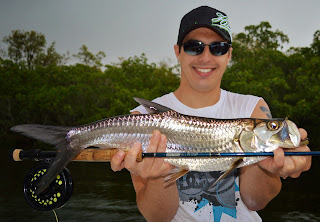 August means several things for anglers here in Southwest Florida, such as blazing heat, oppressive humidity and best of all, baby tarpon rolling by the dozens in both Pine Island Sound and Matlacha Pass.


The big schools of fish that cruised the Gulf beaches have continued their migration and are mostly north of us by now.  There are still a few stragglers out there but triple-digit tarpon will become a rare sight as we head into late summer.  If you missed your chance at an exhausting, hour-long fight with one of these fish on a 12-weight fly rod, you might have to wait until next year.


But don’t worry, you can still toss flies at silver kings for the next couple months, and you won’t have to work so hard to land them.


Right now we’re at the start of what a lot of guides consider our second tarpon season.  While the big migratory breeders are an April through June event, from August through October the juvenile tarpon are the stars of the show around Pine Island.  These fish are mostly under twenty pounds and still several years away from reaching their reproductive age.  That means they’re usually more focused on eating and getting bigger, not chasing potential mates.  Anyone who’s spent a hot and frustrating afternoon off Cayo Costa making cast after cast to indifferent hundred pounders will welcome these smaller tarpon with open arms.


These are the perfect light tackle fish and any rod capable of landing a trout or red will work fine.  An easy to cast 8-weight with floating line is my favorite rig.   Juvenile tarpon are not very particular with their diet and I’ve caught them on just about every fly in my box including #6 bonefish patterns, but I tend to use the same streamers that I throw at the bigger fish.  Every tarpon, no matter what their size, has a rock hard mouth and the 2/0 Owner hooks that I tie my big fish flies with stick better than anything else.


Spin fishermen will have an even wider choice of ammo to use for these juveniles.  Pitching a live greenback or pinfish into a rolling school is usually a sure thing.  Large canal shrimp hooked behind the horn would be my second choice when using live bait.  Paddle tail Gulps rigged on a 5/0 swim bait hook have put a lot of small tarpon in the air for my anglers and so have various Bass Assassin style softs plastics.


The one lure I use more than any other when I’m after snook, trout and reds is the trusty Zara Spook.  It’s also the one I use the least for tarpon.  There’s nothing I love more than watching a fish blow up on a topwater lure and tarpon make a better explosion than anything else.  Unfortunately they tend to hit these light surface lures so violently that they knock them several feet in the air and miss the hooks completely.  It’s the most entertaining thing you’ll ever see but it doesn’t often result in a solid hook set so the topwaters usually stay in the box when I’m tarpon fishing.


You obviously have to get your boat to these fish before you can catch them and this can be the tough part.  A school of rolling tarpon is really easy to spot but that doesn’t mean they’re easy to find.  Since these juveniles are too small to join the migration, they tend to find hidden areas up in the mangroves and stay there.  This is all the more reason to get off your regular spots and do a little exploring.  If you don’t have a skiff that will get you back into the bushes try taking a kayak with you.  I found one of my best “secret” baby tarpon spots this way.  (Which two other guides already knew about before me.)  You may also get lucky and find them rolling by the dozens along the canals of Matlacha and Pine Island.  (Which every other guide already knows about.)


No matter where you find them or how you hook them, juvenile tarpon are the most entertaining fish on the flats.  There’s an old saying that goes, “Fish don’t get big by being dumb,” and if you know where to look you can find a more than a few dumb tarpon around this month.
Posted by Capt. Gregg at 6:44 PM

Email ThisBlogThis!Share to TwitterShare to FacebookShare to Pinterest
Labels: fly fishing, Juvenile Tarpon, Matlacha, Pine Island, tarpon, tarpon photos
Newer Post Older Post Home
Welcome to the Pine Island Angler. This blog is published from my home base on beautiful Matlacha, Florida where I run my guiding business Wildfly Charters. I started this site to provide regularly updated news about salt water flats fishing throughout Southwest Florida, the Keys, and many other Stateside and Caribbean locations. As a full time guide since 1995 I'm always looking for that next undiscovered spot or secret fly that will lead me to even better fishing and I'm happy to share what I find here on this site. I welcome any of your comments on all of my posts. Feel free to contact me with any questions by e-mail at gmckee1@hotmail.com or call me directly at (239)565-2960. Capt. Gregg McKee