Tarpon On The Fly 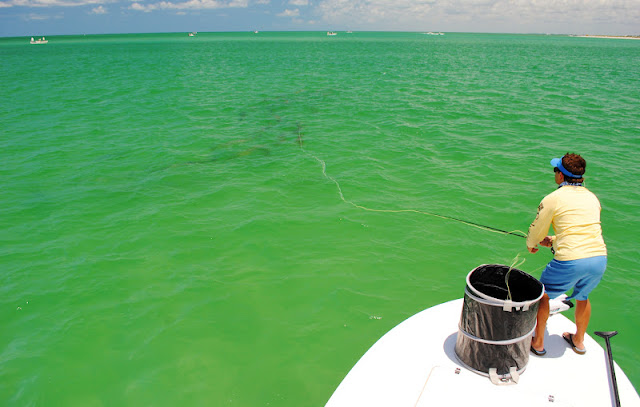 Summer is all about tarpon and I spent the majority of last month chasing some very big fish off the beaches of Cayo Costa and Gasparilla Island. There were thousands of them rolling through the beautifully clear waters out there on their way to Boca Grande Pass and through Charlotte Harbor. I had several very experienced fly anglers on my bow but only a few of them actually managed to stick a hook into a tarpon.

We were not alone in our frustration. At any given time there were at least a dozen other boats within half a mile of us, all casting fly rods, and most days we saw none of them hook up either. If anyone tells you they were crushing the big Gulf tarpon on fly this past month, I promise you they’re exaggerating.

So what was the problem? For starters, the fish are really on the move out there, which is to be expected during their annual migration. Of the hundreds of schools we cast to only a small percentage were floating dead still in the water. The rest were swimming along at around 3 mph. I know this was their average speed because I was watching my GPS while chasing after them with my trolling motor. That might not sound too fast but when a tarpon is coming straight at you, combined with the drifting speed of the boat, the gap closes really quickly. The average time we had from when I'd first spot a fish until an accurate cast had to be made was usually less than ten seconds.

Speaking of those casts, accurate isn't quite the right word here. Perfect is more like it. Migrating tarpon are nocturnal feeders, they're simply not as concerned with finding food during the day, but at the same time they won't pass up an easy meal. If they spot a shrimp or crab swimming just below the surface and can pop open their huge mouth to inhale it, they will. The same thing goes for a fly dropped directly in their path. Land it two feet to the tarpon's left or right and they'll completely ignore it. I've seen this behavior thousands of times over the past two decades and even though it no longer surprises me, it still drives me absolutely insane some days.

So what this all boils down to is that the angler has at best a ten second window to make a cast from a moving platform through moving air into moving water at a moving fish, then land the fly in a narrow rectangle no closer than two and no further than four feet from the fish's nose, and begin stripping the fly so it is slowly moving away from the fish to accurately simulate prey and trigger a strike. Sound's easy, right?

Several years ago a grown man broke a $600 fly rod over his knee on the bow of my boat in sheer frustration after one too many blown shots at cruising tarpon. It was a childish and borderline insane thing to do but something I totally understood after the day he was having. I told him that when I saw him the next morning in my bathroom mirror, and reminded him about Sage’s lifetime warranty, too.

If you do manage to put it all together, these tarpon will eat. They're a big animal and they need a lot of food to keep them moving and they can be caught on fly at any hour of the day, even off a very busy SW Florida beach. The photo below is of a hundred pounder caught at high noon on a Saturday prove it. They're just a lot more unforgiving when the sun is shining. My advice is to lather up the sunblock, stay out there, and practice, practice, practice. 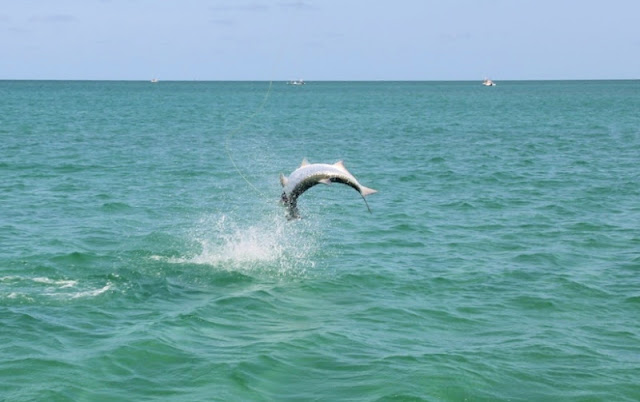 Email ThisBlogThis!Share to TwitterShare to FacebookShare to Pinterest
Labels: Boca Grande, Cayo Costa, fly fishing, tarpon
Newer Post Older Post Home
Welcome to the Pine Island Angler. This blog is published from my home base on beautiful Matlacha, Florida where I run my guiding business Wildfly Charters. I started this site to provide regularly updated news about salt water flats fishing throughout Southwest Florida, the Keys, and many other Stateside and Caribbean locations. As a full time guide since 1995 I'm always looking for that next undiscovered spot or secret fly that will lead me to even better fishing and I'm happy to share what I find here on this site. I welcome any of your comments on all of my posts. Feel free to contact me with any questions by e-mail at gmckee1@hotmail.com or call me directly at (239)565-2960. Capt. Gregg McKee