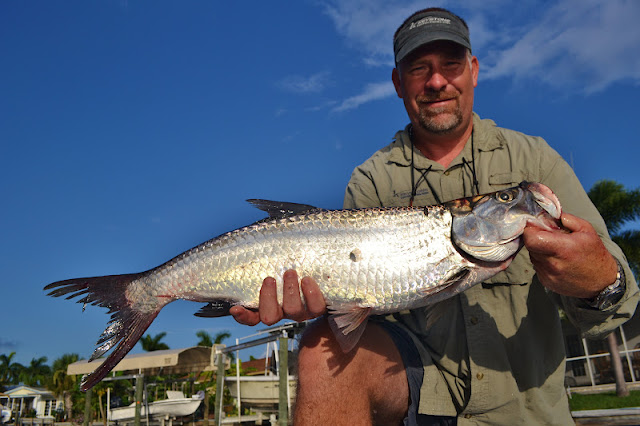 Big morning tides and calm winds have had these guys rolling everywhere this past week.  They're hanging in the deeper canals and by most of the docks surrounding Pine Island and they become incredibly active at night.  I've heard from a few different anglers who've really crushed the tarpon after midnight around the construction barges off the Matlacha Bridge.  In the daytime it's a different story and usually refuse to eat anything, even live bait.  My buddy Don Moorehead landed the ten pounder pictured above with a white paddletail jig on one of his Keystone Custom Rods.  We threw at these fish, which were rolling by the dozens near the bridge, for almost an hour yesterday and this was the only one we landed.  They good news is that they'll be here for the rest of the summer and well into the fall.
Posted by Capt. Gregg at 11:25 AM

Email ThisBlogThis!Share to TwitterShare to FacebookShare to Pinterest
Labels: Pine Island, tarpon
Newer Post Older Post Home
Welcome to the Pine Island Angler. This blog is published from my home base on beautiful Matlacha, Florida where I run my guiding business Wildfly Charters. I started this site to provide regularly updated news about salt water flats fishing throughout Southwest Florida, the Keys, and many other Stateside and Caribbean locations. As a full time guide since 1995 I'm always looking for that next undiscovered spot or secret fly that will lead me to even better fishing and I'm happy to share what I find here on this site. I welcome any of your comments on all of my posts. Feel free to contact me with any questions by e-mail at gmckee1@hotmail.com or call me directly at (239)565-2960. Capt. Gregg McKee