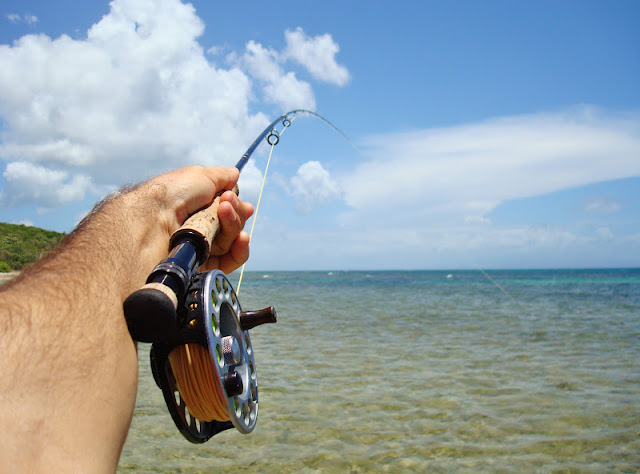 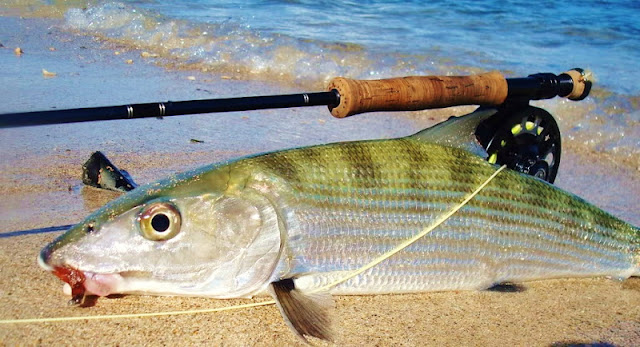 It's on the north side of Vieques, Puerto Rico, a few miles from the island's main town of Isabel Segunda.  You have to park you car and walk half a mile down the beach, which is almost always empty, especially in the morning when the fish seem to tail the most.  It's not a big flat, about the size of two football fields, and it doesn't hold a lot of fish.  There's a resident school that calls it home and sometimes you'll see two or three dozen tails, but usually less.  They're spooky but no worse than the bones in the Keys, even though the locals don't fish for them because they're not good to eat.  You can sometimes spot a permit there, too, but always further out by the reef where the waves are breaking and it's too dangerous to wade.  Permit are like that, just a bit too smart when someone with a fly rod is in the neighborhood.  Sometimes the bonefish on this flat are that smart, too, but not all the time.  If you get there just after the sun rises and stand real still about fifty feet off the beach, the school will be there.  Your fly has to be small and light.and you might only get one good shot but if you put it right on them they'll eat.  You have to stip quick and it's a mad rush once they once they spot the fly but one always finds they hook.  The next few minutes are typical bonefish, screaming drag, furious reeling, exhausted fish at your feet.  No different on this flat on Vieques than one in the Keys or the Bahamas or Belize or the Seychelles.  There aren't many sharks in this part of the Caribbean so that's a bonus when you watch your fish swim away.  The school usually spooks after one gets pulled from the ranks and that never really bothered me.  My fishing was done and I'd walk back up the beach and be home in time for breakfast.
Posted by Capt. Gregg at 7:52 PM

Email ThisBlogThis!Share to TwitterShare to FacebookShare to Pinterest
Labels: bonefish, fly fishing, Puerto Rico, Vieques
Newer Post Older Post Home
Welcome to the Pine Island Angler. This blog is published from my home base on beautiful Matlacha, Florida where I run my guiding business Wildfly Charters. I started this site to provide regularly updated news about salt water flats fishing throughout Southwest Florida, the Keys, and many other Stateside and Caribbean locations. As a full time guide since 1995 I'm always looking for that next undiscovered spot or secret fly that will lead me to even better fishing and I'm happy to share what I find here on this site. I welcome any of your comments on all of my posts. Feel free to contact me with any questions by e-mail at gmckee1@hotmail.com or call me directly at (239)565-2960. Capt. Gregg McKee