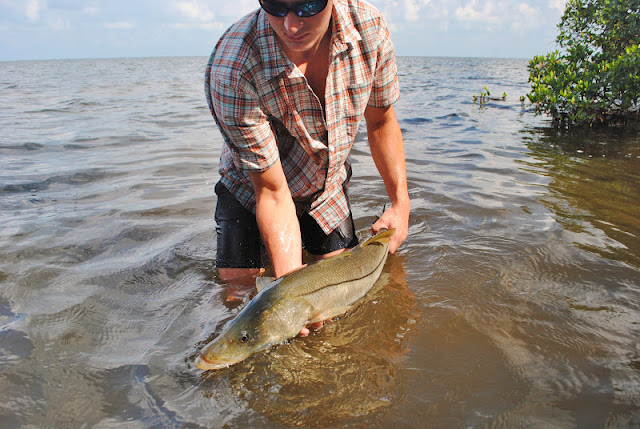 The FWC just changed their minds about our snook season at a meeting over in Palm Beach and you gotta send them back for another year (at least.)   Here's the full press release:

Snook to remain closed for another year in Gulf waters

The Florida Fish and Wildlife Conservation Commission (FWC) voted to keep the recreational harvest of snook in Gulf of Mexico waters closed for another year to offer the species additional protection after a 2010 cold kill detrimentally affected the population.

The decision came at the June 28 Commission meeting in Palm Beach Gardens after staff presented an updated stock assessment that showed snook populations are improving in the Atlantic and are not in biological jeopardy in the Gulf. The next assessment is due in 2015.

“If we have a bad winter this year, we will benefit from this caution; if we don’t have a bad winter, we will let all these breeding fish come through the slot,” said Vice Chairman Kenneth Wright, referring to the snook slot limit of 28 to 33 inches in Gulf of Mexico waters. “We’ll really have done something good and we’ll have protected some of these fish.”

The recreational snook season was closed in Gulf of Mexico and Atlantic waters by executive order on Jan.16, 2010, after the cold kill. The FWC manages snook in both state and federal waters, though the species tends to inhabit the shallower, near-shore state waters. The effects of the cold kill were less severe on the Atlantic coast, where the normal season reopened for harvest Sept. 1, 2011.

There is no commercial harvest for snook in Florida.

Snook are one of Florida’s premier game fish, and anglers often practice catch-and-release techniques when targeting this species. When planning to release snook, proper handling techniques ensure the best chance of survival. This includes returning the fish to the water as quickly as possible; using wet hands to handle the fish; supporting its weight in a horizontal position when the fish is out of the water; not holding the fish by the gill plate, eye or jaw; and reviving the fish if necessary by running it through the water head-first to allow water to flow over its gills.

Learn more about snook by visiting MyFWC.com/Fishing and clicking on “Saltwater,” “Recreational Regulations” and “Snook.”
Posted by Capt. Gregg at 7:16 PM