From this month's Lee County Boater: 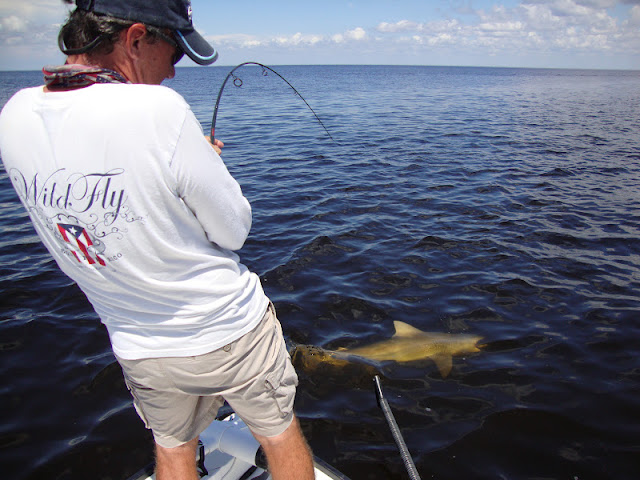 June is here and this is a month that’s usually all about tarpon, tarpon, and more tarpon.  It’s true that the silver king holds the top spot with most Pine Island anglers right now but there’s another powerful and acrobatic predator all over the flats this month that’s equally worth pursuing:  the black tip shark.
I’ve always thought black tips as tarpon with teeth.  That’s because they have a tendency to launch themselves into the air as soon as they feel the hook.  They can also peel off yard after yard of line in the blink of an eye.  The last fish that actually spooled me was a 50 pound black tip that emptied 250 yards of mono while I was trying to pull my anchor in a deep Key West channel.  An Olympic sprinter would have been embarrassed by how quickly that shark made off with all of my line.
As an added bonus, black tips are one of the few species of shark that will readily attack a fly.  An incredible sense of smell but weak eyesight is a characteristic of most sharks.  Unfortunately this makes convincing them to eat a scentless hunk of feathers a real trick.  Black tips have a powerful nose but they also attack their prey on purely visual cues.  Spin fishermen catch them all the time on plugs and lures and a large, flashy fly pattern will usually work just as well.  Color, however, is very important when you’re tying shark flies and ironically a very bright, life jacket orange works better than anything else.  Twenty pound test fluorocarbon and six inches of light Malin wire is all you’ll need for a bite tippet.
While black tips and many other species are common in the shallows right now, getting a good cast at one can be more difficult than most people think.  Black tips are especially wary around boats but a good amount of chum in the water can get them into attack mode.   For this I really like to use a small jack which I’ll butterfly and hang off the bow.  Ladyfish work just as well, too.  Then I just drop the Power Pole and wait.  If I don’t see a fin within half an hour I’ll start drifting with the current.
The long sandbars in Charlotte Harbor are a perfect area to set up a chum line for sharks.  The water is especially clear up there and you’ll almost always find a decent current.  Once a shark is spotted homing in on the scent it’s important to cast well ahead of its path and get the fly moving.  Black tips seem especially turned on by motion and will be drawn toward a pulsing orange pattern just under the surface.  If they charge the fly it’s important to continue to strip even after the hook disappears under the shark’s nose since their mouth is set further back and the actual take is not always visible.  Just like with tarpon, you’ll need to strike them hard with your line hand to make sure the hook penetrates and holds.  Any shark’s mouth is as tough as leather and designed to take a lot of punishment when their prey decides to fight back before getting swallowed.
Once the fly is stuck keep treating them like tarpon.  Get the slack line on the reel quickly and bow to them when the shark jumps.  Black tips will test the drag of any reel so let them do their thing for the first few minutes before getting too aggressive.  Once they settle down you can pressure them hard and even a full grown black tip can be landed in less than thirty minutes.  After you have the shark boat side, be sure to release them unharmed.  Some people think black tips are decent eating but I hate seeing them killed for any reason.  There are so many better tasting fish out there and almost every shark species has been terribly overfished.  Let them all go to fight another day.
Sharks will never replace tarpon as a glamour species, especially with the fly fishing community, but the beautiful and acrobatic black tips deserve a lot more attention than they get.
Posted by Capt. Gregg at 1:32 PM

Email ThisBlogThis!Share to TwitterShare to FacebookShare to Pinterest
Labels: Charlotte Harbor, Pine Island, sharks
Newer Post Older Post Home
Welcome to the Pine Island Angler. This blog is published from my home base on beautiful Matlacha, Florida where I run my guiding business Wildfly Charters. I started this site to provide regularly updated news about salt water flats fishing throughout Southwest Florida, the Keys, and many other Stateside and Caribbean locations. As a full time guide since 1995 I'm always looking for that next undiscovered spot or secret fly that will lead me to even better fishing and I'm happy to share what I find here on this site. I welcome any of your comments on all of my posts. Feel free to contact me with any questions by e-mail at gmckee1@hotmail.com or call me directly at (239)565-2960. Capt. Gregg McKee