Saturday was one of those days where I wanted to smack my head into a hard wall repeatedly. For starters I had a new customer on the bow who happened to be a very experienced fly angler and had fished with a handful of other guides I knew across the state. Obviously I wanted to impress him but the the fish had other ideas.  Every single boat owner in SW Florida was on the water along with me that morning which made the tarpon a no-show on all my favorite flats and the few redfish we saw clearly had the jitters.

Since I finally had some time to myself on Sunday morning I decided to do a little exploring and find where all the fish were hiding. There was a great incoming tide in Matlacha Pass around 10AM so I let the current carry me into one of the longer creeks in the north part of Buzzard Bay, a spot I haven't fished in a very long time.  I started seeing a lot of activity when the water turned the same color as cherry soda. I was casting an 8wt fly rod and a 3/0 deer hair slider since I thought spinning tackle would make too much noise. 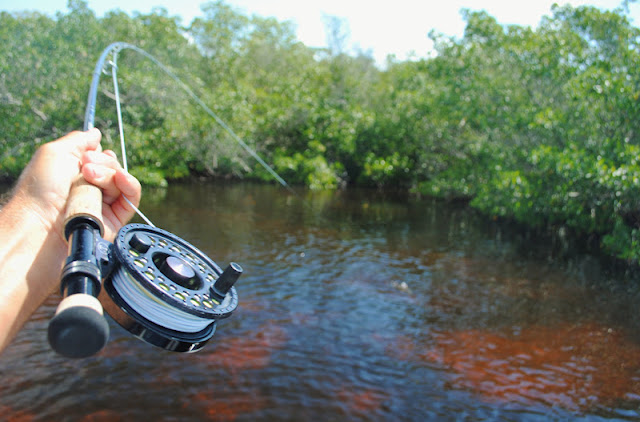 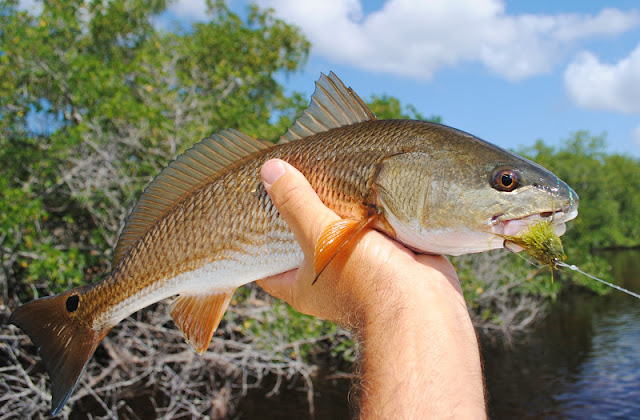 This was my first hookup, a nice little rat red. 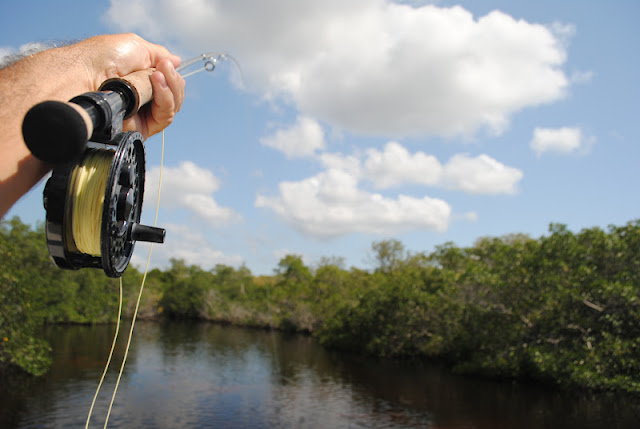 I kept floating with the current until it was obvious that my skiff wasn't going any further. The creek was more than deep enough but it got very narrow. That's where the first baby tarpon were rolling. I switched to a 7wt with a 1/0 Toad pattern that would splash down even lighter. It worked. 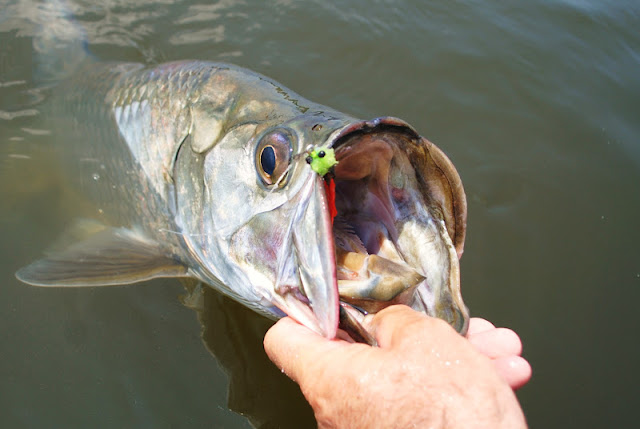 It wasn't a big fish, maybe 10 pounds tops, but a tarpon is a tarpon.

After that hookup the little school moved further up the creek but my Beavertail with its 82 inch beam couldn't keep after them without making a lot of noise crashing through the branches. Those of you with Gheenoes or kayaks would have a lot of luck up in these waterways right now. I headed back out into Buzzard Bay to work the shorelines for a bigger red. I found him after about ten minutes casting with the 8wt and big deer hair fly 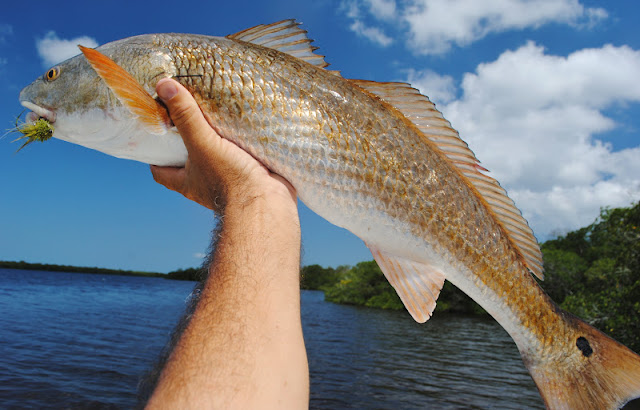 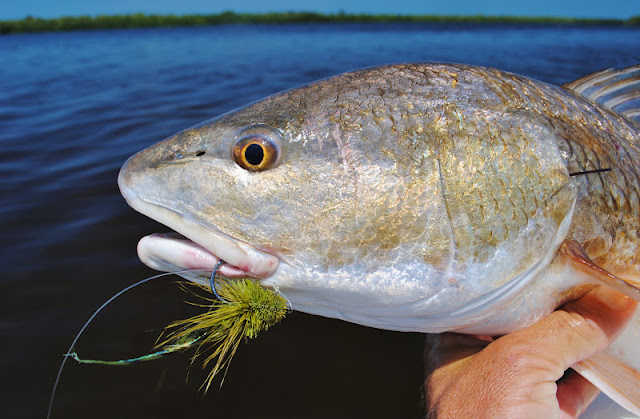 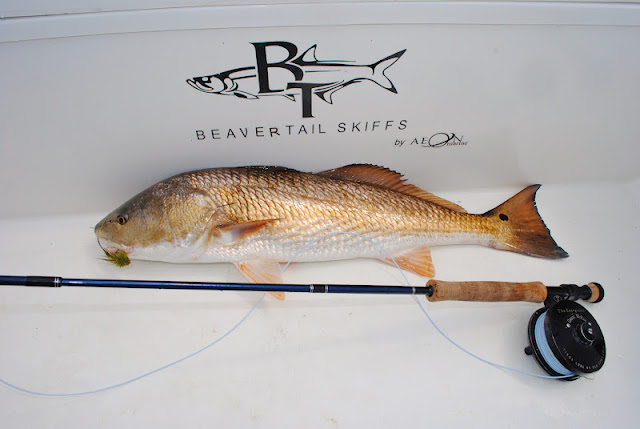 This fish would have been a real tournament winner, right at the 27 inch mark and heavy. It was one of the nicest slot sized redfish I've seen in a long time. Not bad for three hours on a busy Sunday morning.

The conditions were still perfect at the end of the day so I decided to head out again with my dad on the boat and try for a snook and trout to complete the Grand Slam.  The snook didn't come out to play but we landed a couple dozen nice trout just north of Matlacha including this perfect 23 incher. 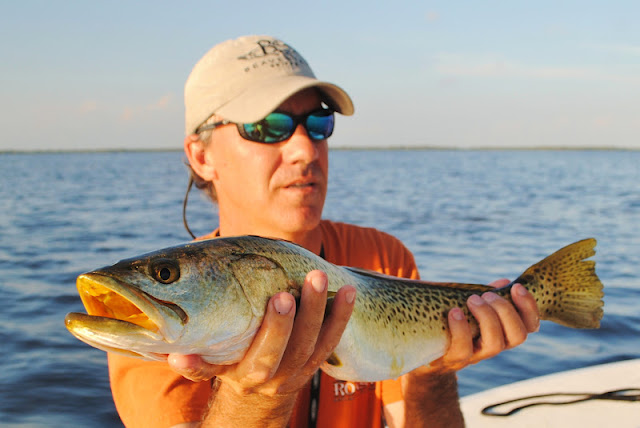 A great day on the water for me but a real kick in the nuts since I couldn't produce the same results for my paying customer 24 hours earlier.  I don't like it but that's how it goes sometimes.
Posted by Capt. Gregg at 8:05 PM

Email ThisBlogThis!Share to TwitterShare to FacebookShare to Pinterest
Labels: fly fishing, Matlacha, redfish, sea trout, tarpon
Newer Post Older Post Home
Welcome to the Pine Island Angler. This blog is published from my home base on beautiful Matlacha, Florida where I run my guiding business Wildfly Charters. I started this site to provide regularly updated news about salt water flats fishing throughout Southwest Florida, the Keys, and many other Stateside and Caribbean locations. As a full time guide since 1995 I'm always looking for that next undiscovered spot or secret fly that will lead me to even better fishing and I'm happy to share what I find here on this site. I welcome any of your comments on all of my posts. Feel free to contact me with any questions by e-mail at gmckee1@hotmail.com or call me directly at (239)565-2960. Capt. Gregg McKee