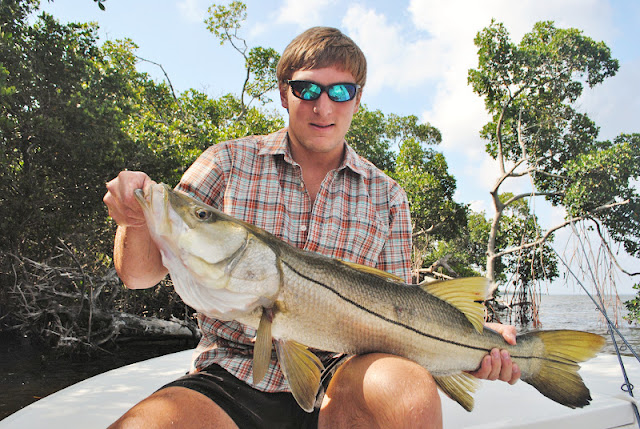 This last week of May has been a productive ending to a frustrating month.  Tarpon season started off with a bang and the big fish were pouring up the Gulf beaches.  School after school would pass us by on their way through Boca Grande Pass and into Charlotte Harbor.  Getting them to open their mouths for a fly was a different story altogether, and I sent a handful of good anglers home convinced that being able to catch one down here was pure B.S.  At the same time, they all said that they'd see me again next year.  I guess some guys just love a good ass kicking.

So let's talk snook fishing.  For starters, I never go out of my way to target these fish right now since they're still out of season until further notice, but there are a pile of them out there.

That's my friend Sam Peplinski in the photo above with a 33 incher he caught with me yesterday near Burnt Store.  Sam was tossing a white Zoom on a Marsh Works jig head into the shoreline at high tide and nailed this fish on his fourth or fifth cast.  The big snook blasted right back into the bushes and wrapped itself around half a dozen different mangrove fingers before Sam had a chance to turn its head.  We both jumped in the water after it.  Sam wove the rod through the roots while I followed the line up to where I saw a lot of splashing near the shore.  Everything came untangled at once and suddenly there was a big snook right under my right hand. 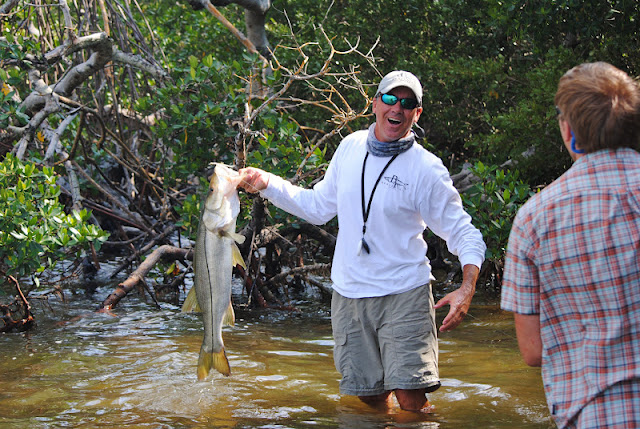 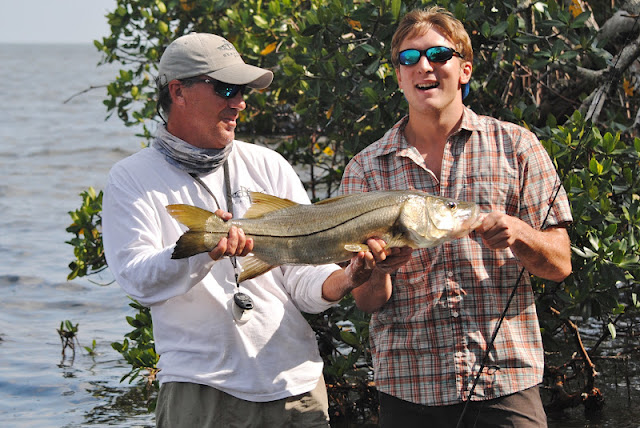 Sam's dad Mike stayed in the boat and got these shots for us.  It was a great fish, my biggest snook of the year and Sam's personal best.  And there are lots more of them out there.  You can't keep any until September, (FWC willing) but you can still get plenty of practice catching them until then.
Posted by Capt. Gregg at 5:17 PM

Email ThisBlogThis!Share to TwitterShare to FacebookShare to Pinterest
Labels: fly fishing, Matlacha, snook, tarpon
Newer Post Older Post Home
Welcome to the Pine Island Angler. This blog is published from my home base on beautiful Matlacha, Florida where I run my guiding business Wildfly Charters. I started this site to provide regularly updated news about salt water flats fishing throughout Southwest Florida, the Keys, and many other Stateside and Caribbean locations. As a full time guide since 1995 I'm always looking for that next undiscovered spot or secret fly that will lead me to even better fishing and I'm happy to share what I find here on this site. I welcome any of your comments on all of my posts. Feel free to contact me with any questions by e-mail at gmckee1@hotmail.com or call me directly at (239)565-2960. Capt. Gregg McKee