I haven't fished for the last three days thanks to the temps being in the 40's in the mornings. Here's a true story I wrote almost five years ago when I lived and fished in the always warm Caribbean. 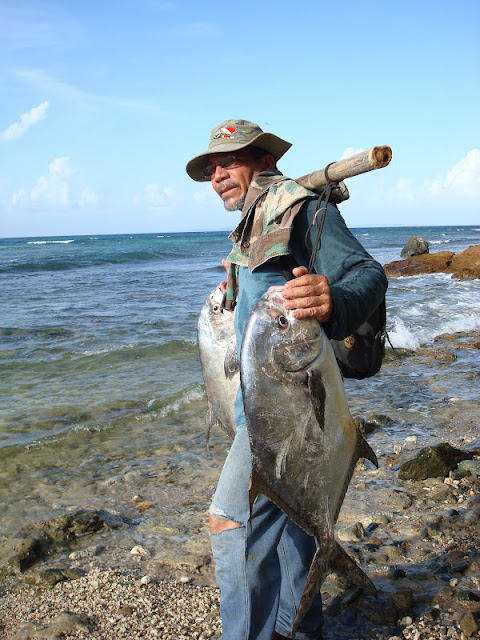 My wife and I had just parked our Jeep and were walking down Encampment Beach to one of my favorite bonefish flats around 4 o‘clock in the afternoon. I didn’t think I had much chance of catching anything, it was windy, late in the day, and the tide was too high. None of that mattered at the time. I just wanted out of the house after witnessing the end of Penn State’s disastrous excuse for defense against Ohio State. We were less than twenty yards from the road when I spotted someone climbing over the rocks that mark the beach’s western end. He was clearly a local, an older man wearing torn jeans and a long sleeve shirt despite the heat. What he was carrying up the beach made my jaw drop.

He had a three foot piece of driftwood over his shoulders and hanging from each end, tied by a short length of sturdy crab trap line, were two huge silver fish. From a hundred yards away I easily recognized their unmistakable shape as a species I’ve spent the last twenty years chasing in both Florida and Puerto Rico. They were permit, each well over twenty-five pounds and nearly three feet in length. They’re one of the most elusive and difficult fish to catch anywhere in the world, especially on a fly rod. I’ve had anglers come to Vieques from as far away as Sweden to chase permit without success, and here came two prime examples up the beach, hanging from a piece of bamboo.

I stopped the man immediately and started hammering him about his catch. “Where did you catch them, what kind of bait did you use, and can I take your picture?” were a few of the questions I managed to spit out in amazement. His answers surprised me even more.

He caught them just past the very flat I was heading to, where I’d seen many but never hooked a single permit in over two years of trying. His bait was a hunk of conch tossed out on a simple hand line with twenty pound test; he’d probably never used an actual rod and reel in his entire life. The fish he was taking home were actually two out of the three permit that he had caught during the morning, the first one got away. What really stunned me was his lack of excitement at a catch that had this full time fishing guide going through the roof. Hooking a single permit is the very essence of a perfect day on the water. Back in my Key West days, where they’re a lot more common, catching three permit would get you mentioned in the sports page. The fisherman in front of me, with fifty pounds of these fish hanging off his shoulders, looked as excited as someone coming home from the grocery store.

He was probably a Dominican, judging from the Spanish he spoke, and as I finished taking his picture I couldn’t help marveling at the real differences between us as anglers. I was carrying the newest Sage fly rod and reel worth nearly $1200 retail, while he had an old hand line, often called a yo-yo, that sells for about $3 at the hardware store. I was wearing a pair of $180 polarized sunglasses to help cut the glare and spot fish, he was wearing none. I had on a new pair of Teva booties to protect my feet from the sharp coral and sea urchins, he was barefoot. Finally, he was the one walking away with two incredible fish, and I knew I’d be going home empty before I even started casting.

He was eager to get home with his catch so I took a few more quick photos and said goodbye. Back in Key West, where I’d catch dozens of permit each year, I never thought to bring one home for dinner. Killing a permit, the holy grail of fly fishing, is a huge taboo among the guides and anglers up there. When a permit agrees to be caught on a fly it must be cherished, photographed, painted in watercolors, and written about poetically after its safe release. Catching permit in the Keys elevates the guide and angler to a higher plane in the sport. You become the elite of the elite. Eating one is pure sacrilege.

This isn’t the case down here in Vieques and I’m actually happy about it. Permit are great eating and the two being carried up the beach would feed his family well that week. After almost two decades of looking at the permit as a nearly mythical creature, it was a bit of a shock to see them for what they really are; just another fish in the sea. My high tech gear and I came home empty that afternoon. We were shown how it’s done by a hand line, a hunk of conch, and a clearly superior fisherman.
Posted by Capt. Gregg at 5:05 PM

Email ThisBlogThis!Share to TwitterShare to FacebookShare to Pinterest
Labels: permit, Vieques
Newer Post Older Post Home
Welcome to the Pine Island Angler. This blog is published from my home base on beautiful Matlacha, Florida where I run my guiding business Wildfly Charters. I started this site to provide regularly updated news about salt water flats fishing throughout Southwest Florida, the Keys, and many other Stateside and Caribbean locations. As a full time guide since 1995 I'm always looking for that next undiscovered spot or secret fly that will lead me to even better fishing and I'm happy to share what I find here on this site. I welcome any of your comments on all of my posts. Feel free to contact me with any questions by e-mail at gmckee1@hotmail.com or call me directly at (239)565-2960. Capt. Gregg McKee