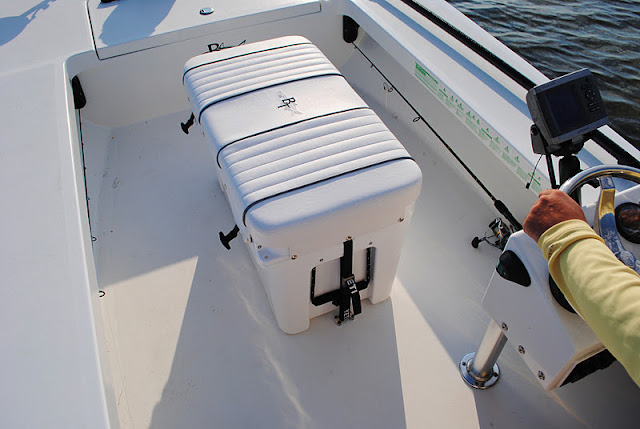 If you're an avid boater of fisherman you've heard of Yeti Coolers.  They've been on the market for several years now and are by far the best cooler you can possibly own.  Tough doesn't even begin to describe them.  They're even bear proof.  Don't believe me?  Check this out from their website:

Fortunately, we don't have many grizzlies around Pine Island but it's nice to know that if we did, my lunch would be safe.

Yeti coolers aren't cheap, but this is a case of getting more than your money's worth out of a product. Unless it gets stolen by a bear, I'll never have to replace the 75 quart Tundra model that also doubles as a center seat on my BT3. A Yeti cooler is a lifetime purchase.
Posted by Capt. Gregg at 7:59 AM

Email ThisBlogThis!Share to TwitterShare to FacebookShare to Pinterest
Labels: Beavertail Skiffs, Yeti Coolers
Newer Post Older Post Home
Welcome to the Pine Island Angler. This blog is published from my home base on beautiful Matlacha, Florida where I run my guiding business Wildfly Charters. I started this site to provide regularly updated news about salt water flats fishing throughout Southwest Florida, the Keys, and many other Stateside and Caribbean locations. As a full time guide since 1995 I'm always looking for that next undiscovered spot or secret fly that will lead me to even better fishing and I'm happy to share what I find here on this site. I welcome any of your comments on all of my posts. Feel free to contact me with any questions by e-mail at gmckee1@hotmail.com or call me directly at (239)565-2960. Capt. Gregg McKee