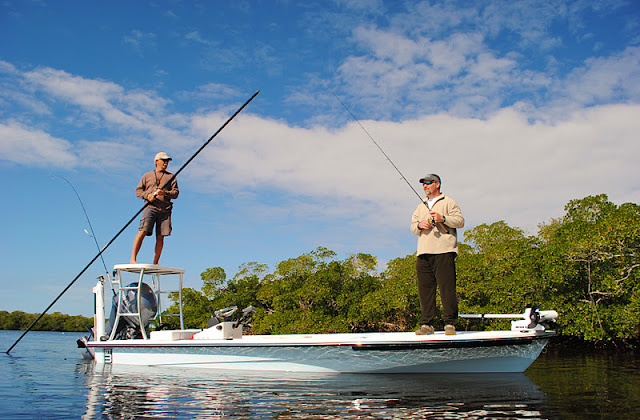 After spending more than a week with my new Beavertail, I've got some rough performance numbers for this skiff with its 70 Yamaha Four Stroke.  My main goal for this boat was a cruising speed of 30 mph at no more than 4500 rpms.  Top speed was not as important to me since the only time I run at full throttle is to escape a thunderstorm.  With its current 4 blade Power Tech prop I'm getting 28 mph at 4500 rpms, just 2 mph shy of my target speed so I'm going to try a 3 blade next week.

The fuel consumption of this Yamaha has been phenomenal at just under 3 gph.  That's during an actual fishing trip that included jumping on and off plane at least a dozen times with two anglers  and a full tank of gas.  This is better than I expected and about the same as my older and lighter Beavertail B2 with its 2 stroke 50.  This engine is a real winner.

The draft is 7 1/2 inches and that was measured right after I took the photo above, again with two anglers, a full tank of gas, a loaded cooler, and a lot of fishing gear.  I've also got this boat rigged with a 24v remote control Minn Kota trolling motor and a Power Pole so there's another 200 pounds.  Skip those two options and you'll probably loose 1/2 of draft.  That's only a one inch gain over a full loaded B2.

Overall, I'm thrilled with this boat and the ride still amazes me.  I've always hated getting wet, especially on a cold morning like today and the BT3 has totally solved that problem.  If you're in the market for a new skiff then a Beavertail has to be on your list.  I'll be happy to give anyone a free test ride if you're in the neighborhood
Posted by Capt. Gregg at 7:16 AM

Email ThisBlogThis!Share to TwitterShare to FacebookShare to Pinterest
Labels: Beavertail Skiffs, BT3
Newer Post Older Post Home
Welcome to the Pine Island Angler. This blog is published from my home base on beautiful Matlacha, Florida where I run my guiding business Wildfly Charters. I started this site to provide regularly updated news about salt water flats fishing throughout Southwest Florida, the Keys, and many other Stateside and Caribbean locations. As a full time guide since 1995 I'm always looking for that next undiscovered spot or secret fly that will lead me to even better fishing and I'm happy to share what I find here on this site. I welcome any of your comments on all of my posts. Feel free to contact me with any questions by e-mail at gmckee1@hotmail.com or call me directly at (239)565-2960. Capt. Gregg McKee