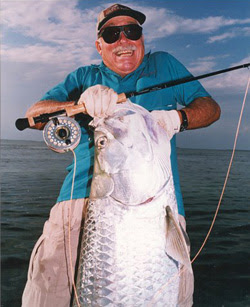 If you stopped by the Aeon Marine/Beavertail Skiffs display at last week's Ft. Lauderdale Boat Show you had a chance to see the latest Vengeance to hit the water as well as meet Capt. Stu Apte.  For those of you not familiar with him, Stu Apte is the very definition of a living legend.  In addition to being a pioneer guide in the Florida Keys starting in the late 50's, Stu is an IGFA Hall of Fame member and holder of several world records.  He has invented knots and flies, designed rods and reels, and when he wasn't guiding he held down a second job with a little outfit called Pan AM where he flew 747s around the globe.  Before that he was a fighter pilot and spent hundreds of hours flying the Navy's first generation of insanely dangerous supersonic jets onto small aircraft carriers built during WW2.

Flats boats have gone through a tremendous evolution from the heavy wood hulls of the 1950s to the composite wonders produced today, and we can thank Stu Apte for some of that, too.  Stu has consulted with several notable builders over the years, including Action Craft and Scout Boats, where he steered the design of quite a few innovative skiffs.  Stu's latest partnership with Beavertail is more than just good marketing on the part of Aeon Marine and will definitely improve their line of already impressive boats.  I'm really looking forward to seeing his input on Beavertail's upcoming El Diablo skiff scheduled to hit the water next year.

It's no secret that I'm a huge fan of all things Beavertail and Stu Apte has long been one of my heroes.  He's also a genuinely nice guy and I could listen to him talk for hours.  If you want a great read pick up his autobiography "Of Winds And Tides" and you'll learn a ton of things you didn't know about everything from fly fishing to jet fighters.
Posted by Capt. Gregg at 6:34 AM

Email ThisBlogThis!Share to TwitterShare to FacebookShare to Pinterest
Labels: Beavertail Skiffs, Stu Apte
Newer Post Older Post Home
Welcome to the Pine Island Angler. This blog is published from my home base on beautiful Matlacha, Florida where I run my guiding business Wildfly Charters. I started this site to provide regularly updated news about salt water flats fishing throughout Southwest Florida, the Keys, and many other Stateside and Caribbean locations. As a full time guide since 1995 I'm always looking for that next undiscovered spot or secret fly that will lead me to even better fishing and I'm happy to share what I find here on this site. I welcome any of your comments on all of my posts. Feel free to contact me with any questions by e-mail at gmckee1@hotmail.com or call me directly at (239)565-2960. Capt. Gregg McKee