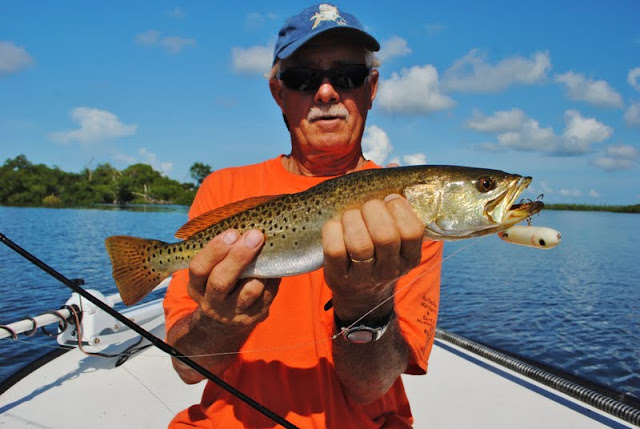 We've had a banner week of sea trout fishing here off Pine Island, especially before Friday's cold front.  The day before I had a charter that landed at least 60 fish in four hours, including 9 slot sized keepers.  I also heard from my buddy Capt. Mike Bartlett in Key West this morning and he's also been doing really well with the trout in the backcountry basins down there.  A lot of folks don't realize that these fish can be found that far south but check out his latest blog post here for the photos and details.

When I was guiding in the Lower Keys sea trout were a rare catch, at least for me.  I probably caught less than half a dozen in the 10 years I fished the flats down there.  According to Mike they're becoming a regular catch in places like Turkey Basin, just north of Boca Chica and the Saddlebunch Keys.  Mike also knows several spots that often produce redfish and snook, two species I never caught in all of my charters in the Keys.  This is a great sign that Florida's waters are healthier than ever despite what a lot of folks would like you to believe.
Posted by Capt. Gregg at 8:15 AM

Email ThisBlogThis!Share to TwitterShare to FacebookShare to Pinterest
Labels: Key West, Mike Bartlett, sea trout
Newer Post Older Post Home
Welcome to the Pine Island Angler. This blog is published from my home base on beautiful Matlacha, Florida where I run my guiding business Wildfly Charters. I started this site to provide regularly updated news about salt water flats fishing throughout Southwest Florida, the Keys, and many other Stateside and Caribbean locations. As a full time guide since 1995 I'm always looking for that next undiscovered spot or secret fly that will lead me to even better fishing and I'm happy to share what I find here on this site. I welcome any of your comments on all of my posts. Feel free to contact me with any questions by e-mail at gmckee1@hotmail.com or call me directly at (239)565-2960. Capt. Gregg McKee