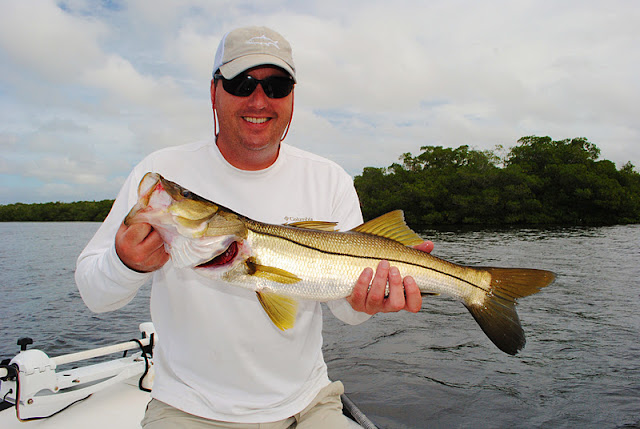 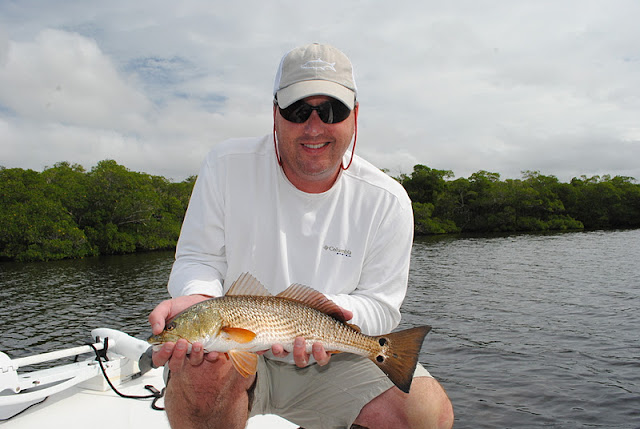 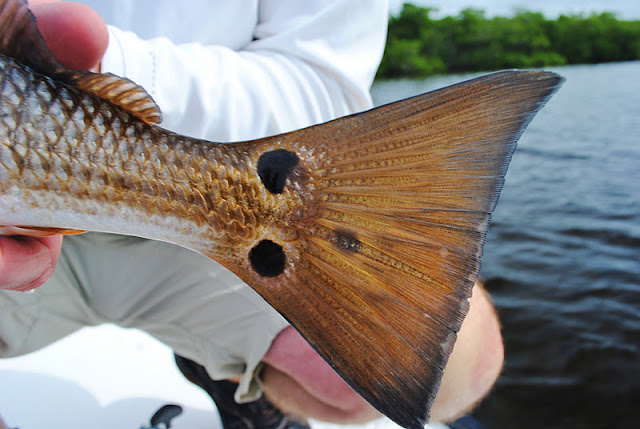 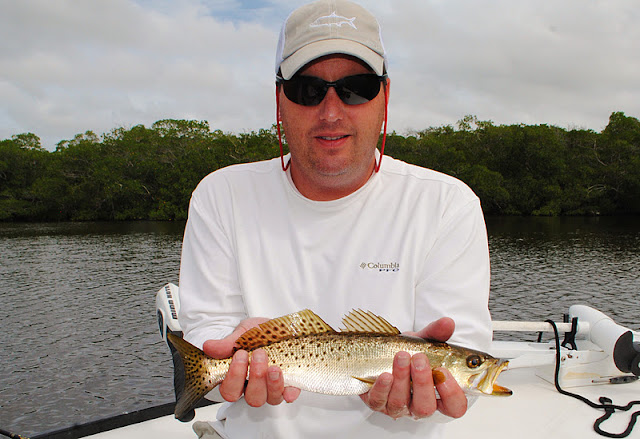 October is the month when it comes to fishing the flats in Southwest Florida.  All the inshore species are here and Atlanta angler Paul Burgan scored a pair of Slams with me yesterday by landing two reds, two snook, and a couple and trout, all within two hours of each other and all on the same lure.  We were using a white Zara Spook, (what else) and hiding from the wind near the mangroves just north of the power lines in Matlacha Pass.
This was a great morning but it could have been even better.  In addition to the winds that kept us off a lot of my favorite flats, we had high clouds that ruined the visibility through the water.  We spooked a lot of big redfish right under the bow before we ever had a chance to cast to them.  The chop on the surface also made the tarpon impossible to find which ruined our chance at a true Grand Slam.
And in case there's still any confusion, a Grand Slam means catching four fish, not three.  A three run homer in baseball is just that:  three runs.  Hit a dinger with bases loaded and what do they call it?  A Grand Slam.  Same rules apply to fishing.  You need that tarpon to call your Slam around here a Grand one.﻿
Posted by Capt. Gregg at 12:46 PM

Email ThisBlogThis!Share to TwitterShare to FacebookShare to Pinterest
Labels: Grand Slam, Pine Island, redfish, sea trout, snook
Newer Post Older Post Home
Welcome to the Pine Island Angler. This blog is published from my home base on beautiful Matlacha, Florida where I run my guiding business Wildfly Charters. I started this site to provide regularly updated news about salt water flats fishing throughout Southwest Florida, the Keys, and many other Stateside and Caribbean locations. As a full time guide since 1995 I'm always looking for that next undiscovered spot or secret fly that will lead me to even better fishing and I'm happy to share what I find here on this site. I welcome any of your comments on all of my posts. Feel free to contact me with any questions by e-mail at gmckee1@hotmail.com or call me directly at (239)565-2960. Capt. Gregg McKee