Big Jack Crevalle From The Pass 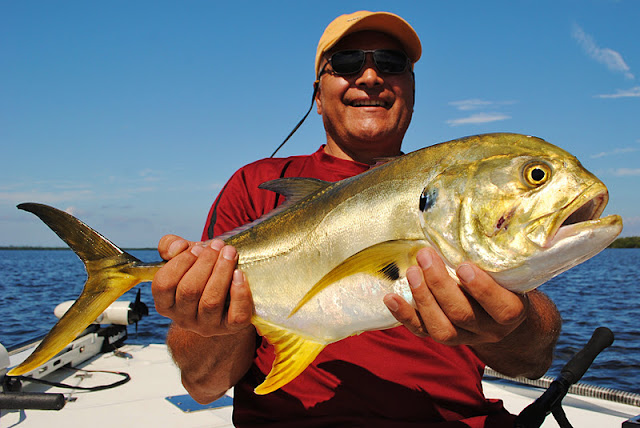 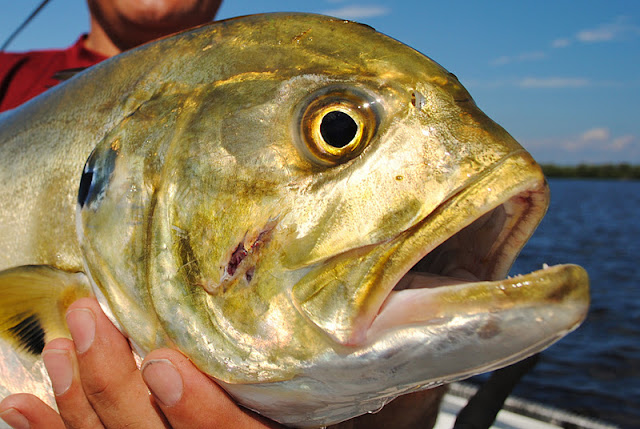 Pound for pound, there's no stronger fish in the ocean than the crevalle.  Mike Peplinski from Atlanta and Matlacha landed this beautifully colored fish a mile north of the island on a topwater Spook.  Even though this was only a five pounder it still took several minutes to land on 20# Power Pro.  Nothing can put a hurting on light tackle like the jacks and fall is one of the best times of year to find them around these parts.
An even better place to chase these fish is down in the Lower Key, especially in the winter.  From January to March you can find even bigger jacks hanging on the backs of almost every stingray on the Gulf flats.  I'm planning on taking my new skiff down there after Christmas just to fly fish for them with poppers for a few days.  If you've never hooked a big jack on a fly rod, find a way to do it soon.
Posted by Capt. Gregg at 12:39 PM

Email ThisBlogThis!Share to TwitterShare to FacebookShare to Pinterest
Labels: jacks
Newer Post Older Post Home
Welcome to the Pine Island Angler. This blog is published from my home base on beautiful Matlacha, Florida where I run my guiding business Wildfly Charters. I started this site to provide regularly updated news about salt water flats fishing throughout Southwest Florida, the Keys, and many other Stateside and Caribbean locations. As a full time guide since 1995 I'm always looking for that next undiscovered spot or secret fly that will lead me to even better fishing and I'm happy to share what I find here on this site. I welcome any of your comments on all of my posts. Feel free to contact me with any questions by e-mail at gmckee1@hotmail.com or call me directly at (239)565-2960. Capt. Gregg McKee