The Best Bonefish I Ever Caught

Here's something I wrote a few years ago for Enchanted Isle.com down in Puerto Rico: 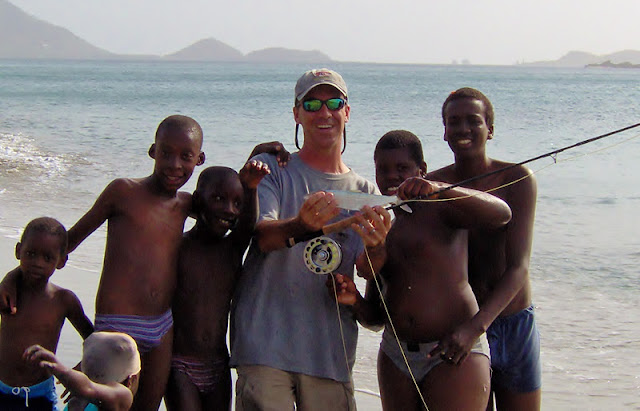 The main reason I moved to Vieques was its bonefish population. This is one of my favorite species to chase in saltwater and Vieques is the best place I’ve ever fished for them. It's far from the best bonefishing spot on Earth. From what I’ve been told that title would probably go to the Seychelles or Christmas Island, two exotic locales that are half a world and at least $10,000 away from me right now. But Vieques is home and we have a handful of flats where I can catch tailing bonefish any day of the year, which makes it my favorite bonefishing destination so far.

But my favorite bonefish came from somewhere else.

A customer questioned me about this a while ago as I was poling him across the incredible flats of Ensenada Honda. “What was the best bonefish you ever caught?” he asked.

Surprisingly, my best bonefish was not my biggest bonefish.  I landed that one about eight years ago off Key West.  That fish was really memorable because I actually thought it was a big barracuda at first, sitting dead still over some white sand.  I decided to hit the fish with my shrimp fly anyway just for target practice. I wasn’t too surprised when it shot forward and ate because barracuda are prone to do when you don't want them to, especially with bonefish patterns. What did surprise me was when my line wasn't sliced through after few seconds into the first run. When the fish never jumped, something cuda do frequently, I thought, “We might have a big bone here,” and it was.  We weighed it on a Boga Grip at 10 1/2 pounds and to this day it is still the biggest bonefish I've ever caught.

But my best bonefish, the one that sticks with me the most, weighed in at the other end of the scale. I was on my honeymoon down on Grenada, an island with no real flats and basically no bonefishing opportunities.  Grenada wasn't my first choice but when you guide for a living it’s hard to sell a fishing trip as a honeymoon to a non-fishing wife. The island itself was fantastic and I still packed my fly rod to use at the beaches, but with little luck for the first few days.

Amanda and I decided to take an overnight trip to a neighboring island called Carriacou, an hour’s ferry ride north. Carriacou is smaller and sparsely populated but with even more fantastic beaches. Just like on Grenada, none of the locals could tell me much about finding bonefish, or macabi as they're called in that part of the Caribbean, but I hit the beach below our guest house anyway, hoping to bend a rod on something.

I was casting a small Clouser into the surf when my line came tight after a few throws and I was relieved that something finally picked up the fly. I got a two second run and some quick tugs which told me that I probably hooked a snapper or small jack. I stripped the line in easily and my catch surfed a small a wave to the sand at my feet. It was a tiny bonefish, less than ten inches long and weighing maybe half a pound, the smallest one I’d every seen.

I called Amanda over to get a picture of my ridiculous catch when the beach behind me erupted with noise. A half dozen school kids in their swimming trunks came running down the sand towards me. They surrounded us, jumping up and down pointing at my fish and jabbering questions in their heavily accented Patois, the island version of English that I could barely understand. The kids had never seen a fly rod before, let alone somebody use one to catch something off that beach, and I had never seen anyone so excited over a half pound bonefish.

The oldest boy asked me in Tourist English if they could keep it. Even though I’ve always released my bonefish, they're popular in much of the Caribbean for fish stew. This one would go home as their contribution to the evening meal. When I handed it over they all broke out into a song and started dancing around Amanda and I right there on the beach. They were singing in the same heavy Patois but I understood the meaning. This was their “Thanks for the Fish” song and was one of the best parts of our honeymoon.

Email ThisBlogThis!Share to TwitterShare to FacebookShare to Pinterest
Labels: bonefish, fly fishing, Grenada, Vieques
Newer Post Older Post Home
Welcome to the Pine Island Angler. This blog is published from my home base on beautiful Matlacha, Florida where I run my guiding business Wildfly Charters. I started this site to provide regularly updated news about salt water flats fishing throughout Southwest Florida, the Keys, and many other Stateside and Caribbean locations. As a full time guide since 1995 I'm always looking for that next undiscovered spot or secret fly that will lead me to even better fishing and I'm happy to share what I find here on this site. I welcome any of your comments on all of my posts. Feel free to contact me with any questions by e-mail at gmckee1@hotmail.com or call me directly at (239)565-2960. Capt. Gregg McKee