Back in the summer of 2004 I was finishing up my ninth tarpon season in Key West and I wasn’t happy. I had a full schedule of charters but the wind had been blowing a solid twenty knots since New Year’s and didn’t stop until right after my last client of the summer stepped off my boat. Just spotting a fish in those churned up conditions was a minor victory on some days. And to rub salt in my wounds, the number of guides working around Key West had easily tripled from the previous decade. Even if you could find a good spot out of the wind, thanks to the miracle of GPS someone else was usually there. I wanted out of the Keys and a small island off the coast of Puerto Rico called Vieques was the most likely candidate at the time.
I knew I was going to live on this island before the wheels of the tiny Cessna even touched the short runway at Vieques International. Mile after mile of shoreline stretched out below me and no other charter boats except for one, owned by Capt. Franco Gonzalez, who'd been guiding on the island since 1999. I envied the hell out of the guy and I hadn’t even spoken to him yet. And truthfully, I was afraid of actually doing that. Franco had something down here that was completely unheard of up in Florida. No competition.

When I first started fishing off Key West in the early-90s there were about twenty five full time flats guides on the island.  Most were indifferent at best to a newcomers like myself.  A few of them welcomed me like bad news after a colonoscopy. One notoriously short tempered veteran even threatened me with an ass-kicking after I got too close to him on a huge tarpon flat. I apologized profusely back at the dock and then pointed out to this particular vodka-sponge that, while I could probably use a good ass-kicking, I was twenty years younger and twenty pounds heavier than he was, and I didn't appreciate his way of "educating" me on the water. We settled on an uneasy truce after that. I never crowded him again and he never spoke to me again.  Win, win.
Conflicts like that were just another part of the Key West landscape, and I actually did everything I could to aviod them. Eventually I found success with my clients and developed a good reputation with most of the other guides on the island, so moving on after a decade on the flats was a big risk.  What would it be like down on Vieques where there was no guide community, and only Franco Gonzalez to contend with?
I got the answer on my second trip to Puerto Rico when I spent a month down there looking at real estate, fishing from the Vieques shore and asking everyone I met if they thought Franco would tolerate another guide sharing his water. I finally worked up the nerve to call his number on the next to last day of my trip and book a charter with him. I decided to spill my guts and tell Franco that I was a guide hoping to move to Vieques and start running trips in a few months. I braced myself for a barrage of profanity (I learned all the Spanish swear words from the Cuban boatyards Key West,) but instead I got a very measured response of, “Well, thanks for telling me that.”

So long story short: Franco took me out the next day, showed me the entire south side of Vieques, including his two most productive tarpon bays, and hooked me into my first Puerto Rican bonefish within five minutes of stepping onto his favorite flat in Ensenada Honda. I wrote a deposit check for a house later that day.
Capt. Franco Gonzalez had the island of Vieques to himself and could have said “Get lost, Gringo. Don’t even think of stepping on my toes down here.” A lot of other guides would have done exactly that, but Franco didn’t. He did the exact opposite and I can’t thank him enough for it.


Over the next few years we saw a big increase in tourism on Vieques and our two boats became a necessity on several occasions when groups of anglers would visit. In 2007 a New York Times article profiled both Franco and myself and business really took off.  Our guide services complimented each other for the most part and my wife and I really benefited from having Franco as a friend down there.
Two years ago the big tarpon of Pine Island beckoned me and I handed my share of the Vieques bonefish back to their original owner. They couldn't be in better hands. Capt. Franco Gonzalez is a not only a rock solid fly fishing guide but a true conservationist and the perfect ambassador for the flats of Vieques and Puerto Rico. If you’re heading to the island anytime soon and want a perfect day on the water just give him a call at (787)450-3744. 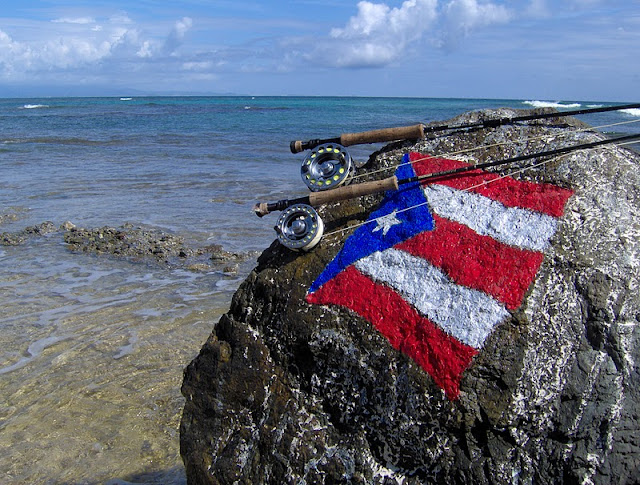 Email ThisBlogThis!Share to TwitterShare to FacebookShare to Pinterest
Labels: fly fishing, Puerto Rico, Vieques
Newer Post Older Post Home
Welcome to the Pine Island Angler. This blog is published from my home base on beautiful Matlacha, Florida where I run my guiding business Wildfly Charters. I started this site to provide regularly updated news about salt water flats fishing throughout Southwest Florida, the Keys, and many other Stateside and Caribbean locations. As a full time guide since 1995 I'm always looking for that next undiscovered spot or secret fly that will lead me to even better fishing and I'm happy to share what I find here on this site. I welcome any of your comments on all of my posts. Feel free to contact me with any questions by e-mail at gmckee1@hotmail.com or call me directly at (239)565-2960. Capt. Gregg McKee