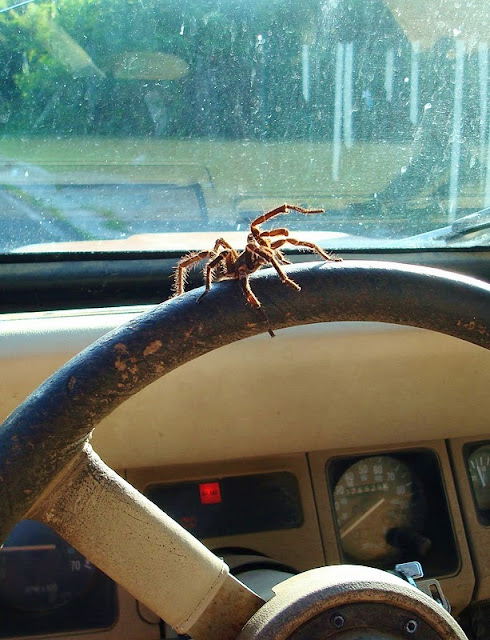 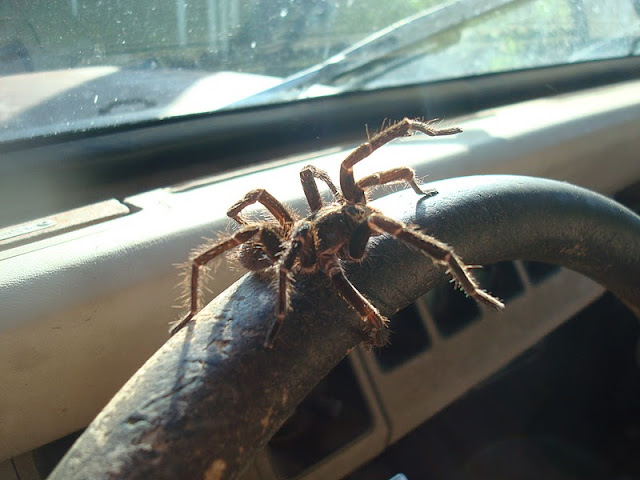 Tropical Storm Irene became Hurricane Irene in the middle of the night on August 23rd while it was directly over the island of Vieques, Puerto Rico, where I guided before moving back to Florida and still own a house. My current tenants experienced several inches of water on the floors, despite the fact that the property is 140 feet above sea level, but no serious damage. They also told me about a more unpleasant flood that started the next day. A bug flood.

Heavy rains flush all sorts of things out of the ground on Vieques. It usually starts with swarms of flying termites and escalates in horror until poisonous things start showing up in unfortunate places. My tenants seem to be taking in all in stride since so far, but it reminded me of my favorite bug story from my time in the Caribbean.

I used to launch my bonefishing charters at a little beach called La Platita. It was actually nothing more than a small clearing at the end of a five mile dirt road on the eastern tip of Vieques, an uninhabited part of the island that the Navy used to use as a bombing range for several decades. After I launched the boat I’d park my Jeep and trailer under the mangroves and go fishing.

One January day I got chased back to shore by a sudden storm and quickly hauled out my boat in the heavy rain. Before I started down the trail I noticed something unusual tucked into a corner of the Jeep’s canvas top. It had a lot of hairy legs and clearly did not belong in my vehicle. I poked at it with my keys, hoping to convince it to leave but the GIANT FREAKING SPIDER had other ideas. It dropped into the passenger side foot well and then disappeared under the seat. I wasn’t exactly sure what species this was, but it was definitely a member of the I-Really-Don’t-Want-This-Damn-Thing-In-The-Car-With-Me order of arachnids.

I spent a long time poking under the Jeep’s seats hoping to chase it out into the open, but that didn’t happen. I finally climbed in and lurched down the bumpy dirt road, hoping the monster would stay safely hidden for the next half hour. Talk about a long ride home. When I got back to the house I emptied half a can of Raid under both seats. Goodbye, spider.

The next morning I decided to head down to a spot called Purple Beach for some wade fishing since I had the day off and really needed to catch a bonefish or two. I'd forgotten about my troubles from the previous day's trip and was just enjoying a drive through Vieques on a warm January morning in my convertible Jeep. Life was good.

Then I looked down and sure enough, THERE‘S MY BUDDY!!!

It was a definitely a tarantula and he was climbing up the steering column, clearly getting ready to do something radical like drop right down onto my crotch. If I were flying an F-16 I would have hit the ejection seat right there. Unfortunately, the ‘89 Jeep Wrangler didn’t come with that option so I aimed for the sidewalk and jumped out when the front tires whacked the curb.

I've never had a fear of the tarantulas on Vieques and I'd become used to occasionally finding them in the dark corners of the garage and laundry room at my house. But one in my Jeep? While I'm driving it? Come on! Why can’t they at least chirp like a friendly cricket to let you know they’re nearby?

This tarantula had somehow avoided my Raid fogging and was now trying to make a statement. He continuted crawling to the top of the steering wheel and was staring me down when I finally stepped back towards the Jeep. This was one tenacious spider with a twisted sense of humor, so I decided not to kill him. I snapped a quick photo to remember him by and then flung him on to the road with my ball cap.

I could write a whole book on all of the creepy-crawly things I’ve encountered down in the tropics and tarantulas were far from the worst. They’re actually harmless and their bite is no more painful than a bee’s sting. No one has ever died from being bitten by one, but if I'd been careening through traffic in San Juan instead of cruising an empty road on Vieques, I probably would have been the world’s first tarantula-caused fatality. What a humiliating way to go. On top of that fun little incident, I didn’t even catch any fish when I finally got to the beach. That was a really great morning in Paradise.
Posted by Capt. Gregg at 5:50 AM

Email ThisBlogThis!Share to TwitterShare to FacebookShare to Pinterest
Labels: Vieques
Newer Post Older Post Home
Welcome to the Pine Island Angler. This blog is published from my home base on beautiful Matlacha, Florida where I run my guiding business Wildfly Charters. I started this site to provide regularly updated news about salt water flats fishing throughout Southwest Florida, the Keys, and many other Stateside and Caribbean locations. As a full time guide since 1995 I'm always looking for that next undiscovered spot or secret fly that will lead me to even better fishing and I'm happy to share what I find here on this site. I welcome any of your comments on all of my posts. Feel free to contact me with any questions by e-mail at gmckee1@hotmail.com or call me directly at (239)565-2960. Capt. Gregg McKee