How To Spot Bonefish On The Flats

September is prime time for bonefish in the Keys so if you're heading that way here's an article I wrote a few years ago that might be helpful: 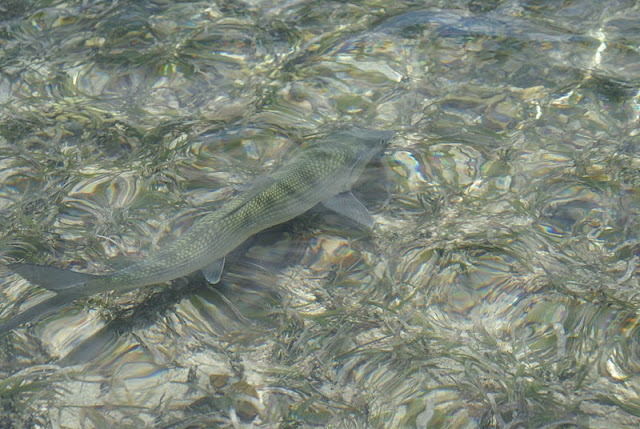 For a beginner, the simple act of spotting a bonefish on the flats is the biggest hurdle on the way to actually catching one. They’re nicknamed the grey ghost for a very good reason. Bonefish are nearly invisible under the best of circumstances and they can appear and disappear in the blink of an eye. They really are the most ghostly fish in the shallows.

The first step in spotting the bonefish is having the proper eyewear before you hit the flats. Even the most expensive frames are worthless without polarized lenses. My personal favorites are the Costa del Mar Fathoms. These are in the upper price range for quality fishing glasses but they also come with a great warranty, so you won’t feel too stupid when you inevitably sit on them. There are several lens colors available but amber is the by far the best for shallow water. If $150 is too steep of a pair or sunglasses there are several less costly alternatives. Even the $10 shades you find at the tackle shop counter will work in the end. The polarized coatings on these cheapos are prone to scratch easily so handle them with care.

Actually knowing a bonefish when you see one is a big challenge, especially if you’re fishing on your own without having used a guide before. I’ve lost count of the number of times my anglers have, just by following my directions, cast to and hooked their first bonefish without ever seeing it. You simply can’t count on walking out to a good looking flat and expect the tails to start sticking up. Casting to a school of tailing bones is one of angling’s great thrills but it’s a lot less common than the TV fishing shows lead you to believe. Tailing is caused by several factors, especially a low incoming tide and calm winds. Find these two conditions, which are a lot more common in the early fall, and you’ve got a nice chance of spotting tails. The good news is that tailing bones are actively feeding, so you know you’re looking at hungry fish.

In most situations you’ll be looking for cruising fish in water at least a foot deep. Add a good twenty knot breeze to the mix and you’ll really need your eyes and brain working together to spot a bonefish. Movement is always a big giveaway. The best thing to do at first is simply pick a spot on the flat and stand totally still for at least fifteen minutes. Open your eyes wide and take in all that’s in front of you, don’t just stare at the downwind spot where you hope to cast. Once you get a fix on the terrain of the flat, the rocks, the sand patches, the sponges, and everything else that’s stationary, a moving object will jump right out at you.

On grassy flats like those in the Keys or Puerto Rico, bonefish can look surprisingly dark. Their backs take on a deep olive camo pattern that makes them appear very grey or even black from above. On the bright sand flats of the Bahamas they’re an exceptionally light blue-grey or even pure silver. Again, movement is always the giveaway. However, wind and currents can create a tremendous optical illusion in the water. Throw in a lot of anticipation and after a while everything starts looking like a bonefish. Stay in one spot too long and you’ll eventually be casting at rocks and sea fans. These are your dreaded “Wish Fish.”

One way to make sure you’ve found a moving target is to immediately look for a feature right next to it. Is the gap between the two points widening or closing? If it is then you’ve definitely spotted a fish. Now lock on to it and don’t look away. If you’re on a moving platform like a skiff or kayak don’t even blink. Taking a quick glance behind you to make sure your cast is clear will cause you to loose the fish almost every time.

Your final step before you cast is to positively identify your target as a bonefish. All good flats are home to a host of other species that can look very “bonefishy” from a distance. Barracuda, boxfish, and small sharks are the three most common imposters. (Although those three are great fun to catch on their own.) The one thing to remember is that bonefish are almost never stationary except when they stop to feed. At that point you’ll either see them tailing or kicking up puffs of mud on the bottom.

That brings us to our final giveaway. Any patch of muddy or milky water on an otherwise clear flat is usually something feeding. This could be caused by mullet, a large stingray, or a school of bonefish. Anytime I see a basketball sized or larger puff of mud, I cast into it immediately. Let the fly or bait drop to the bottom and begin a slow retrieve. If it’s bones you’ll get a quick hookup since you’ve found hungry fish that aren’t paying attention to what’s happening above them.

There are a whole lot of other factors that go into catching bonefish on your own. When you finally see and can positively identify them, even if they’re running in terror from your clumsy cast, then you’ll be a whole lot closer to actually landing one.
Posted by Capt. Gregg at 1:06 PM

Email ThisBlogThis!Share to TwitterShare to FacebookShare to Pinterest
Labels: bonefish, fly fishing
Newer Post Older Post Home
Welcome to the Pine Island Angler. This blog is published from my home base on beautiful Matlacha, Florida where I run my guiding business Wildfly Charters. I started this site to provide regularly updated news about salt water flats fishing throughout Southwest Florida, the Keys, and many other Stateside and Caribbean locations. As a full time guide since 1995 I'm always looking for that next undiscovered spot or secret fly that will lead me to even better fishing and I'm happy to share what I find here on this site. I welcome any of your comments on all of my posts. Feel free to contact me with any questions by e-mail at gmckee1@hotmail.com or call me directly at (239)565-2960. Capt. Gregg McKee