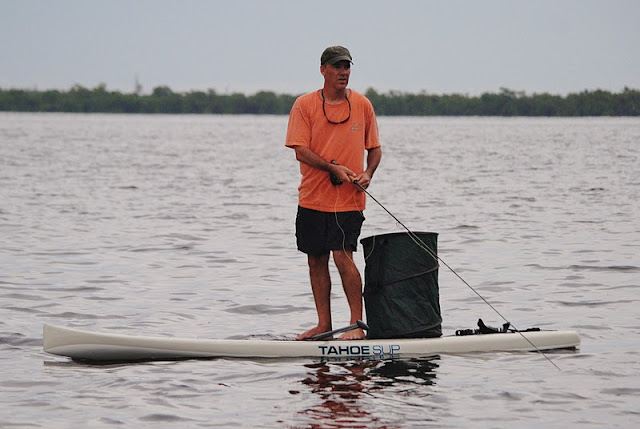 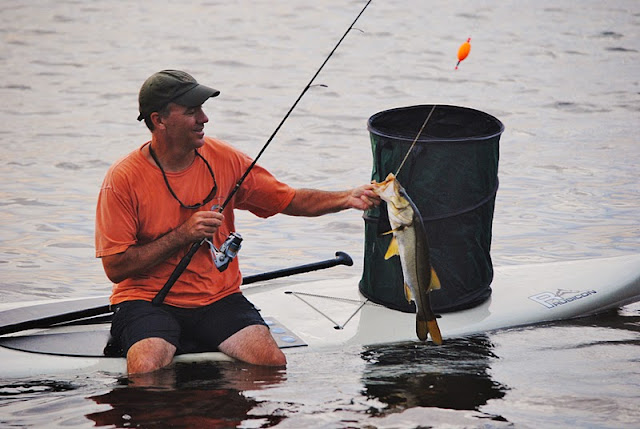 Tahoe Paddleboards are some of the lightest and highest quality SUPs on the market.  I borrowed one of their Rubicon models from Florida Paddlesports earlier this week and took it fishing on a rainy afternoon in Matlacha Pass.
The Rubicon is Tahoe's all-purpose model, sort of an SUV of SUP's, and weighs 34 pounds.  That's really light for a 12' long board that's not strictly made for racing.  At 30" wide it's also stable enough for a beginner to paddle in smooth water.
My interest in standup paddleboards is centered around how they perform as a fishing platform.  I could care less about the workout aspect of the sport since my six-pack abs are already so awesome that I have to keep them hidden beneath a few inches of belly flab.  Tahoe claims that the Rubicon is a great board for just about everything and I agree with them, although I'd grade it with an A as a touring board and a B as a fishing board.
A you can see from the pictures I was trying to fly fish from the board and in the slightly choppy water it was a bit of a chore.  There is a lot of motion involved in casting a fly rod and I never felt totally comfortable doing it from the Rubicon.  It was a different story with a spinning rod and I even hooked and landed a nice 20" snook with a DOA Double Threat.  The Rubicon's light weight also makes it drift very quickly in any breeze so that further limits anglers to spinning gear in open water.  If fishing is your main focus when choosing a paddleboard, try an Ark Silencer or Hooked SUP first.  You'll gain a lot of stability with either of those boards but sacrifice the speed of the Rubicon.
The Rubicon retails for $1399 and you won't find a better looking board out there.  Its built in bungees and attachment points make it a great long distance touring platform, capable of carrying full sized coolers as well as paddlers.  Rig up a rod holder to your Igloo or Yeti cooler and a Tahoe Rubicon can take you almost anywhere.
﻿
Posted by Capt. Gregg at 8:25 PM

Email ThisBlogThis!Share to TwitterShare to FacebookShare to Pinterest
Labels: fly fishing, kayaks, paddleboards
Newer Post Older Post Home
Welcome to the Pine Island Angler. This blog is published from my home base on beautiful Matlacha, Florida where I run my guiding business Wildfly Charters. I started this site to provide regularly updated news about salt water flats fishing throughout Southwest Florida, the Keys, and many other Stateside and Caribbean locations. As a full time guide since 1995 I'm always looking for that next undiscovered spot or secret fly that will lead me to even better fishing and I'm happy to share what I find here on this site. I welcome any of your comments on all of my posts. Feel free to contact me with any questions by e-mail at gmckee1@hotmail.com or call me directly at (239)565-2960. Capt. Gregg McKee